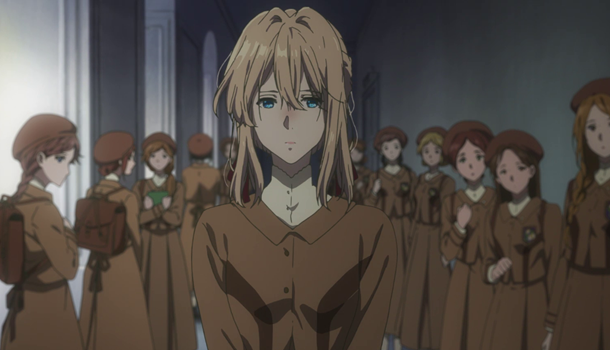 “I will travel anywhere to meet your request” - the mantra of Violet Evergarden and motto of the auto memory doll carries significant weight in this film. Set sometime during the TV series before skipping to a few years after, Violet Evergarden: Eternity and the Auto Memory Doll feels like two extended episodes of the show joined together by a common story thread in order to deliver a theatrical experience. Thanks in part to the episodic nature of the show, this feels like more of the same; the film feels easily accessible to both newcomers to the franchise and to those who have seen the TV series. This is aided by having all the relevant information you need to know about Violet and the world being brought up casually in dialogue. The only thing some viewers may struggle with is the nature of Violet's job and the post office she works at.

Violet is an Auto memory Doll, a job title given to people who write letters for clients who either have trouble composing them or are completely illiterate. The letters serve various purposes, such as formal communication, messages between family and friends, and even love-letters. The main thrust of the TV series was watching Violet grow as a person and learn the meaning of love through the different jobs she was assigned. Here, in this movie, it feels like she isn't questioning this dilemma at the moment, instead focusing squarely on her duties she's been given.

The first half of the movie takes place in a girls boarding school where Violet has been assigned the job of handmaiden to a young noblewoman making her débutante début in a few months time. Violet is there to instruct her and ensure that lessons go smoothly. From the outset this makes it feel like Violet is more of a plot device rather than the main character/focus of the film. This role is taken by Isabella York, the débutante in question, and another character in the second half of the feature. The film is focused on the emotional journey and budding friendship/relationship between Isabella and Violet as the two learn about each other. We see snippets of Isabella's past here and there as things progress. There are a few comedic exchanges and moments between Violet and Isabella, but tied into this are moments of tragedy and reflection as we learn more about Isabella's life. Like the series, the main focus is love. In this instance love for family. We see that Isabella's motivation is all tied into her family and love for a sibling.

This all segues into the film's second half, where a newcomer to Violet's Post Office, the recipient of a letter sent three years prior, wishes to join the post office in order to deliver letters. This second half really feels like this character's journey of discovery, again making Violet more of a supporting character than the lead. Given her nature and the events of the TV series, it makes sense for Violet to take on a more supportive role than take the lead, but those who may have expected more focus on Violet and a continuation  of the series may feel a bit disappointed.

Its also worth noting that the film virtually no action scenes, focusing instead on character interaction and everyday slice-of-life moments. Those expecting more scenes from the war that was depicted in the series will also find this aspect broadly overlooked.

All this said, the film really doesn't need the action. The animation and art is as gorgeous as ever, the character designs are on-point and the film has a rather steady pace that makes you feel like you've just binged watched two episodes rather than sat through a film. It's a rather pleasant experience overall that has some nice emotional moments. While not the big grandiose film adaptation treatment most people go for, Kyoto Animation have really found a nice balance here, making things feel familiar yet fresh enough to warrant the big screen treatment.

Violet Evergarden: Eternity and the Auto Memory Doll was screened as part of Glasgow Film Festival on 1st March 2020 at Glasgow Film Theatre

8
A beautiful and emotional film that feels more like an extended episode than an outright movie, but worthwhile all the same.