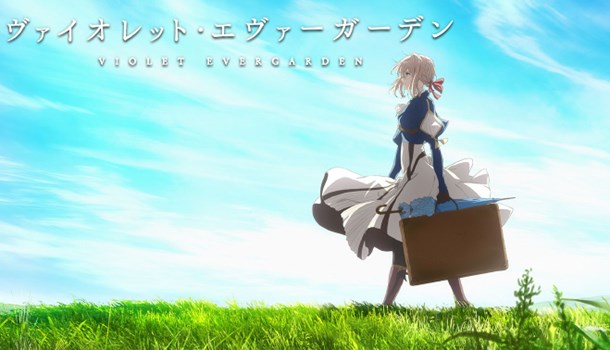 I picked up Violet Evergarden for two reasons. I’d heard good things about it and frankly I liked the look of it; Violet’s design I found appealing – I really am partial to a bit of Victoriana. Yes, I am that shallow, or that easily swayed, take your pick.

So really knowing very little about the series beyond a sense of general approbation existing within the anime community I started out on my journey with Violet Evergarden blessedly free from most preconceptions.

Close your eyes now if you want to approach as did I, because…

To understand her own emotions, and the last words spoken to her by her commander, Major Gilbert, Violent Evergarden becomes an auto memory doll, writing letters on behalf of others, not just their words but the feelings behind their words.

As a concept it’s wonderfully straightforward. As Violet understands the emotions of her clients, so she becomes acquainted with her missing feelings. As such the series has enormous potential because it can go anywhere, do anything; especially as we discover the job of the auto memory doll is to travel wherever those in need of writing letters exist.

We first meet Violet in a military hospital desperately failing to write a letter. We discover she was a child soldier of remarkable efficacy: a “dog” of war of Major Gilbert. Here is the first element of the story: Violet as almost feral, yet apparently emotionless child solider. This is backstory.

But Gilbert’s friend, ex-Colonel Hodgins, takes Violet away from the war front, provides her a job in his fledgling post office, where her work as an auto memory doll begins her development as a more rounded human being. Here is the second element.

The first half of the series investigates Violet’s character and her engagement in her new environment devoid of orders and warfare. She has to think and feel for herself. This I felt was where the storytelling and the characterisation was absolutely at its strongest. From her first letters that exist as no more than military style reports to slowly becoming friendly with the other auto memory dolls, worldly Cattleya, bookish Erica and ambitious Iris, Violet becomes drawn into a makeshift family without her even realising it and in writing letters adapts from military economy to seeing beyond the surface of things.

Friends come into her life almost without her knowing it and Violet begins to shape the world in surprising ways. Moreover the series makes room to delve into the side characters, whether fellow wannabe auto memory doll Luculia and her drunken brother Spencer, or the lives of the other memory dolls. Iris’ return home opens emotional doors previously left shut. Sometimes these are touched on like the suggestion of potential intimacy between Hodgins and Cattleya or the improvised bickering between Cattleya and postman Benedict. Everyone is given moments to become real.

Yet for me after the midpoint, as Violet learns the truth about her commander, and she returns to the scene of the battle that ended the war, and as the series flashbacks for most of an episode, focussing on her origins with Gilbert, on her soldiering, Violet Evergarden started to falter because it starts to become more interested in action. Side characters are mainly side lined and though it’s hardly nonstop action, the change in tone and focus I felt detracted from what had been strong, character driven set up towards something lesser.

And some of it is just unnecessary. The extended flashback where we see Violet as a child solider do we learn anything new about her relationship with Gilbert? No. Everything we see, from her emotional attachment to him to her curious ability to kill to her ambivalent relationship to Gilbert’s brother, Dietfried, we already knew and has previously been told with glorious economy. So suddenly being sent back in time does nothing except tread narrative water. If the intention is to deepen the sense of why Violet wishes to understand Gilbert’s final words then her actions in the contemporary world as an auto memory doll more than illustrate this and do so more effectively.

Thus Violet Evergarden is a perfect example of where more is less and why one should avoid explication. Also, personally I found Violet’s journey and character development as an auto memory doll far more compelling than her soldiering past and any future manifestations. And we don’t need to see more than glimpses of the past because these allow the audience to construct the characters’ feelings in their heads based on their own experiences. Seeing more lessens the impact, because our imaginations are so fertile we understand and more to the point, will construct their relationship in ways that are most personal and relatable to ourselves, not to what someone else believes will be post potent. And the relationship between Gilbert and Violet in the flashbacks I found quite rote - Gilbert never really existing as a character to me.

Maybe too it’s because I felt the series was least effective when it trying to be its most emotive and the flashback tries for the emotional gut punch. Violet Evergarden works better when it emotionally insinuates itself under your skin than the punch in the gut. Violet’s subtle development, such as when she is befriended by Luculia and her drunkard brother, illustrate the strengths of the series. There are moments of uh-oh when you think it may go down the tedious route (the drunkard brother is going to be some violent cliché) but it turns away from flimsy exaggerations and lazy broad brush characterisations to exploring richer emotional relationships.

Violet’s story, thematically, is the universal one of how one moves on from war. So as the series shifts into a conspiracy of ‘anti-peace soldiers’, who threaten to reignite the war from which Violet has escaped, the series also stutters because it transforms Violet into a solider once more and spends time on the ‘anti-peace’ soldiers who are lazily simplistic. Rather than attempt to investigate how returning home from war, into a life where violence is no longer at a premium but is anti-social, unwanted, dangerous, the ‘anti-peace’ soldiers are instead just used as trope ridden narrative nudges towards some action that fails to either move the story or Violet’s character forward except to say she no longer takes military orders. It also is in miserable counterpoint to how characters like Spencer are treated as human being, flawed, damaged but hopeful and capable of taking tender steps towards a different future.

It is not helped that I felt the final episode (excluding the OVA) I found oddly superfluous. Existing to recap, flashback to previous scenes, and make explicit what we already know, it seemed a curiously trite, oddly unmoving ending. I may be in the minority here, but it added nothing much dramatically and if anything reminded me how in the previous episodes much of the supporting cast has been ignored, reintroducing them for some token development and celebration. It felt like button pushing: press E for emotion.

If anything the OVA felt like a more fitting coda to the series. Capturing the themes of moving on from war, waiting hopelessly for loved ones to return and wanting to aid oneself and others to find a way forward, it seemed thematically more apt and again, was more thoughtfully focussed on our protagonists and less on some more grand drama. Violet Evergarden does the personal drama better than the overarching. Yet this is nevertheless a coda.

Of course the animation is beautiful and I appreciated the character design. Violet Evergarden is genuinely beautiful to look at, as few series are. The world is a recognisable semi-Victorian, bordering on steampunk world but it’s beautifully realised. There are few to no still images to save the budget and it’s hard to believe people won’t be captivated by the design, the same the world as for the characters. Violet herself I found beautifully designed, and the side characters all felt fitting even when yes the bookish Erica will wear glasses and Iris, from her village roots, looks a little tribal. Only Gilbert and the anti-peace soldiers really seem average. But visually Violet Evergarden definitely feels like a high water mark both in the quiet design of the world and the fluidity of the animation.

Though even then there are credulity issues. I found it bizarre when we are told that in the contemporary setting that Violet is 14. She certainly looks older than 14, at least a mature late teens. True, Violet is an orphan so might be older yet in the flashbacks she appears younger than after being released from hospital where she seems several years older though it is suggested about 4 months have passed. It was one of a couple of age oddities. Like Violet having to set up a 14 year old monarch with a 24 year old. Something that left me feeling more than vague uncomfortable, especially considering the series doesn’t seem to question: hang on why is a 14 year old being married to a 24 year old?

I found myself randomly looking at the Crunchyroll awards for the year Violet Evergarden won for best animation. It seems entirely fitting yet for all its beauty I could never quite emotionally connect to the series. Like watching Under the Sand, where Charlotte Ramplings remarkable performance hides a shallow film, in some ways quality of the animation and the character design of Violet Evergarden masks its flaws. Maybe it’s just me but for all that the start of the series had that insinuate under my skin feeling the latter half left me occasionally frustrated and definitely the shift towards story over character (not to mention extended flashbacks) unnecessary. Certainly, in the awards that same year, it never made me care about the characters in the way that Rascal Does Not Dream of Bunny Girl Senpei did. And that for me that is perhaps the clincher. Violet Evergarden never quite made me care enough about any of its characters. Perhaps towards the start when it hinted at depths it would lose sight of. Whereas Bunny Girl Senpei remorselessly made you care about its protagonists, as did March Comes in Like A lion (another one in the awards that year and for my money beat Violet Evergarden in every way shape and form). Violet in the end left a bit like her metal arms, a touch lifeless, and like her typing, repetitive. Yet it’s not a bad series, far from it but it feels like wasted potential, a series that didn’t quite know which way to turn, what to develop: world? Character? Go action? So it gave us bits of all the result is something that felt to me as being less than it could have been. And it started so well and I wanted to know its characters so much better,

I know how my mind works. A film or a series that starts badly and ends well sits better with me than one that starts well and loses its way and Violet Evergarden definitely started very well and for me lost its way. I realise I am in the minority regarding how I feel about Violet Evergarden. I suspect the problem is this is not one of those unremittingly bad series, like Vatican Miracle Examiner, where you have an interesting concept executed appallingly in every way, no, Violet Evergarden is glorious to look at and the character design gets it right, and the focus on character really starts to work before… but it just feels like so much wasted potential. Maybe a longer series would have allowed greater development, for a better balance between exploring the world of Violet Evergarden and the characters but as it stands for me it reaches for greatness but like Violet’s metal arms just cannot reach it.