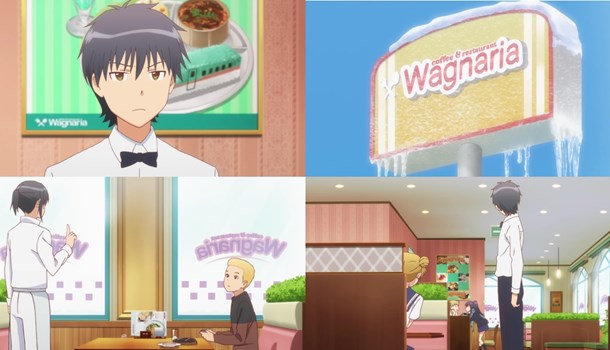 When his father's company goes bankrupt, the laid-back life of first-year student Daisuke Higashida is over. No longer having an allowance and no longer being able to afford cellphone bills is bad enough, but what bothers Daisuke most is having no more money for commuter tickets. Motivated solely by the fact he doesn't want to travel 15 kilometers to school by bicycle, Daisuke reluctantly gets a job at a nearby family restaurant.

WWW.Wagnaria!! is a spin-off of the mainline Wagnaria!! series which ended last year after three seasons. However, it is entirely possible to watch WWW.Wagnaria!! with no knowledge of prior series - whilst the setting is the same, the cast is new and the story has no connections to previous seasons.

As the title suggests, the series mostly centers around Daisuke's workplace and his rather odd colleagues; Hana who aspires to be a cook but can't cook to save her life, rich girl Shiho who admits she loves to torture defenseless creatures, Sayuri who talks to ghosts, and a blatant inept manager - just to name a few.

It is clear this series is based on a four-panel web manga (hence the WWW in the title); the story is light, filled with gags, and episodes consist of short segments following each other at a rapid pace. At times the gags become predictable or feel overused, such as the misunderstandings with employee Kouta who can't speak Japanese.

As a slice-of-life anime, the series somewhat centers on personal life and love interests. Potential love triangles can be spotted from a mile away and none of the characters stand out enough to truly care about, but the focus on some everyday life situations are a nice change from the work environment. Three episodes in, the story mainly revolves around character introductions without getting too deep; the series main theme is comedic relief.
The art of the series befits its story and characters well in terms that it's nothing spectacular but still okay.

Overall, WWW.Wagnaria!! will not render you speechless; the art isn't breathtaking, characters not very memorable, and the story nothing sensational. That said, the series does have its good points; the gags may not be side-splitting hilarious, but some situations may provoke a sensible chuckle. The story may not be outstanding, but can still be entertaining. If you're looking for a light-hearted anime or aren't ready to say goodbye to the franchise as whole just yet, this is at least worth a watch.

You can watch WWW.WAGNARIA!! in streaming form on Crunchyroll.

7
The latest instalment of the Wagnaria!! series offers just enough of what you might come to expect from it.
LATEST REVIEWS