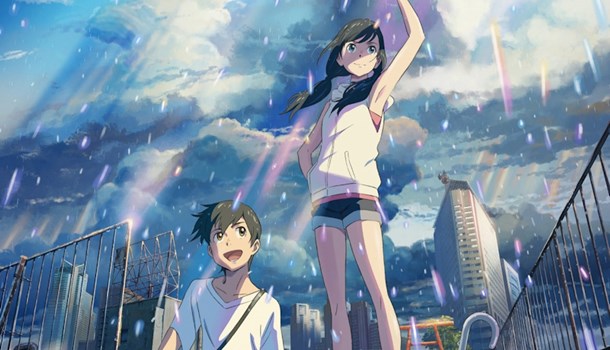 Weathering with You 4k (Import)

As this is the first 4K Ultra HD Blu-ray review on the UK Anime Network, this review will start with a look at the Ultra HD format and 4K anime in general before moving on to the review. Ultra HD Blu-rays are special versions of Blu-ray (incompatible with standard Blu-ray players), which are the current state-of-the- art for home video collections. This format has two major advantages over Blu-Ray: a 4-fold increase in resolution to 4K, preserving finer detail, and HDR (High Dynamic Range) lighting so it can display increased colour depth, making colours ‘pop’ on the screen. Sales of all Ultra HD Blu-Rays, even Hollywood movies, have been modest. Nevertheless, a lot of live-action movies are now being released in that format and many film studios are slowly remastering their back catalogues allowing them to release even more material.

In the 4 years since the Ultra HD format launched, there has only been one 4k anime release in America, Space Adventure Cobra (although one more 4K Blu-ray has been announced since), and only a handful of titles released in Japan. The lack of anime releases in this format is unusual as anime is a technological medium and usually at the forefront of transitions to new formats. Weathering with You, Makoto Shinkai’s hugely successful 2019 movie is one of few Ultra HD released to date, arriving in Japan on the 27th of May with English subtitles available. Fortunately, all Ultra HD releases are region free, therefore importing titles is relatively simple provided you have access to the required 4K TV and Ultra HD Blu-ray player. So why are there so few anime releases in that format?

Ultra HD’s poor overall sales is one contributing factor, however there are also some issues specific to anime. In general, anime suffers from limited sales (even in Japan) and the cost cutting nature of the medium means that few titles have been produced with the required quality to justify this format. Why release an Ultra HD version of a movie if it does not even fully utilise existing Blu-ray technology? The only Ultra HD releases so far have been anime movies, which were originally produced for the higher quality demands of cinema screens. Example of such movies available in Japan with English subtitles or language options are: Your Name, Akira, Ghost in the Shell 1 and 2, Gundam Thunderbolt and Mary and the Witch’s Flower.

Many of the existing Ultra HD releases of older anime have suffered from the dreaded effects of DNR (Digital Noise Reduction), which cleans up film grain but leaves films looking ‘soft’ and undefined This is not the case witht Weathering with You. Instead, it is the new textbook example of what can be done with anime in this format. The movie’s gorgeous artwork benefits greatly from HDR lighting, especially on a modern OLED display. The firework show, which marks the movie’s midpoint, is a visual tour de force, with beautiful explosions against the deep black of the Tokyo sky. As my wife put it, “it’s a more impressive firework sequence than in the movie Fireworks”! Beyond the set pieces, the rain effects that are so important to the look and feel of the movie are the best in the business, establishing the film studio CoMix Wave as the undisputed king of anime rain. But unlike their earlier title, Garden of Words, there is now a playfulness to the effect as the rain moves and squirms around like fish, or ebbs and flows in an organic way. The city of Tokyo is probably the most realistic it has ever looked in an anime, showcasing both in its beauty and decay. The lived-in clutter shows a great attention to detail only previously seen in Satoshi Kon’s work on the older Roujin Z. I would not be surprised if this realistic depiction leads to tourists travelling round Tokyo trying to recreate the movie’s shots as already happened with CoMix Waves previous movie, Your Name. All this amazing detail benefits from the higher 4K resolution on the disc but due to the lack of an easy way to capture a 4K screenshot, I cannot prove how good this looks, and even if I could, you would need a compatible device to see the full impact.

Unfortunately, the story itself does not quite match the quality of the visuals. Like most works of Makoto Shinkai, Weathering with You is a tragic love story. The main male character, Hodaka, runs away from his island life and tries to establish a new life in Tokyo. The movie generates tension as he is underage and must be weary of the authorities. Hodaka quickly falls in with the sketchy businessman, Suga, who takes him under his roof and gives him a job at his freelance writer pursuing paranormal stories around Tokyo. The city is suffering from a summer rain deluge, which is beginning to disrupt Tokyo life. Through a couple of chance encounters, Hodaka meets a real-life paranormal phenomenon, Hina, a sunshine girl with the power to bring sunny weather to localised areas of Tokyo. They quickly go into business together to satisfy requests from Tokyo residents crying out for a little bit of sunshine in their lives, but as you would expect, continued use of this power comes with a hidden cost. The movie wastes this premise and intriguing first half with a disappointing conclusion that stops the movie being a classic. The film never properly explains some of its plot point such as why Hodaka flees his home, nor the full significance of the gun he finds.

That is not to say that the movie is not worth watching, Tom McIlroy’s review is still very valid. I found I thoroughly enjoyed Weathering with You, however this is not a movie that will make you think about it long after watching. In many respects the same could be said about Your Name, which was an unprecedented sales smash. Therefore, if you enjoyed Your Name you will most certainly enjoy Weathering with You. It is not quite as vacuous as I may be implying, with the movie exploring underlying themes of climate change and society’s obsession with youth. To the movie's credit it is never too preachy with this message.

In terms of the package, this collector’s edition is a remarkably similar release to Japan’s previous 4K release of Your Name. The packaging is an understated white hard case that looks great next to Your Name on your bookcase but there is a distinct lack of extras for a non-Japanese reader. Inside there are two untranslated books, including a Japanese script (not storyboard), which are not great for flipping through. The inlay, which contains the collection’s 5 discs, is beautiful and well produced though showing a nice promotional image for the film.

The Japanese 4K collector’s edition is without a doubt the definitive way to enjoy Weathering with You, and the best-looking anime on the Ultra HD format but I will stop short of a recommendation. This edition’s high price (12,000 Yen) and requirement for an even larger investment in your TV to get the most out of it makes it too much of a financial stretch for most fans. Even if you make the necessary outlays, you may not see a clear enough advantage over a regular Blu-ray edition. My wife and I did some comparisons with this collection’s Blu-ray edition and she does not believe the difference justifies the cost, however from my perspective the regular Blu-ray looked disappointingly flat. If you have never seen an anime movie on Ultra HD but are keen to try, this should not be your first movie, instead I would recommend buying Discotek’s far cheaper Space Adventure Cobra and viewing its HDR comparison feature. If Space Adventure Cobra on 4K works for you and you can stomach this collections price then by all means this is your edition of Weathering for You, otherwise Alltheanime’s upcoming Blu-ray version is the recommended option.

7
A fun movie and a visual showcase for the Ultra HD format that is unfortunately let down by the high price point.

Alistair is an independent scholar of anime history in the UK. He doesn't find as much time to watch anime as he used to but he still loves watching anime on the big screen. His first experience of anime was repeatedly renting Warriors of Wind from the local Ritz Video!