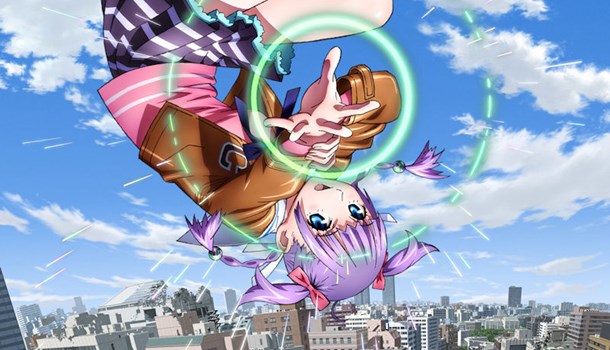 Unlike the more glamorous areas of law enforcement like police or detective work, the humble lawyer is somewhat under-represented in anime - so, it was something of a surprise when Wizard Barristers turned up on the schedule for this season. But the question we must put before the jury is whether this series deserves to be awarded glory for its trials, or if its makers should be sentenced to five years screenwriting practice?

Cecile Sudo, our heroine for the series, is a young prodigy. She’s driven, enthusiastic and she’s the youngest Wizard Barrister to ever pass the bar. Taking a job at Butterfly Law Offices she works tirelessly to protect the rights of fellow mages (or Wud as they’re also known here), primarily those on trial for suspected use of their powers in aid of a crime. Unlike many heroes her motivations are made clear from the outset – she’s desperate to work up the experience to bring about the first ever re-trial for a Wud so that she can appeal against the sentence handed to her mother, whose currently sat on death row. In her day job she’s surrounded by a host of colourful characters from perverted frogs (and co-workers) to seemingly senile old men, and whilst they’re all a little too one-note the sheer number of them means that nobody takes up so much screen time as to try your patience. There are also darker elements at work too - something is going on behind the scenes and it appears that Cecile herself is being targeted for much more nefarious purposes...

Opening statements aside let’s get to the meat of the case and get one thing over with quickly – the actual law/court room side of this series is awful. Its unintelligently written to the point where a child could poke huge holes in the defences that Cecile and her colleagues are putting up, much less the horde of lawyers and judges populating the court room, yet every one of her cases goes exactly to plan and saves the day. Given that this is the main hook the series used to bring people in this is more than a little bit of a disappointment frankly.  What we’re left with instead is an excuse for Cecile et al to go around either getting into trouble that will require the use of flashy magic via some action scenes, to resolve or a variety of comic interludes.

But wait, Masuomi Umetsu is behind the series? The rather infamous director of Kite and Mezzo Forte (fun fact – Kite will be released as a live action movie this year starring Samual L Jackson)? He may well have lost some brownie points after last season’s rather underwhelming Galilei Donna but he’s certainly a name you keep your eye on! Umetsu’s involvement is clearly being heavily featured here, with his trademark speedy and fun action sequences proving to be just as good as ever. He’s also back on character design duties to and his unique designs are just as good as ever with fun, unique looks for the entire cast. Of course his involvement also gets us a heavy dose of fan-service too, though nowhere near the levels he’s delved into in some of his previous works. You’ll notice the heavy use of the word "fun" here, and that’s something particularly noteworthy as the series is just that – fun. From beginning to end its pure sugar-rush entertainment which dumps out everything that’s too dark or serious in favour of someone eating mayonnaise with every meal or someone’s lunch being arranged in the shape of a naked woman. A lot of series attempt this but Umetsu really shows he knows what he’s doing here, managing to keep his plot running without having to focus on it all that hard. Whilst this does bring up a few issues here and there like the aforementioned lack of intelligence in its legal proceedings, it’s easy to overlook these when Cecile’s in front of you making a giant robot out of scrap metal with her magic.

Technically speaking it has to be said that the series isn’t being made on the largest budget and the animation does look a little plain at times, thought Umetsu does work pretty well with it. This could also be part of the reason why our heroine is being voiced by Rui Tanabe, essentially a newcomer to the business with only a handful of other roles prior to this one, most of which coming as background characters. She does a good enough job though and as she’s on theme song duties too so we get to see a bit more of her range with a decent job on the series' ending number (though its nowhere near as good as Justitia, the opening theme from Lia).

Overall then, Wizard Barristers is a series that manages to surprise you by managing to be the exact opposite of what you were looking for. You’ll come for the courtroom drama but the reason you’ll stay is the big grin across your face - it won’t change the world and you won’t see it spawn a new wave of law-based series but it will make sure you enjoy it, with just enough of those moments that’ll make you say "wasn’t it great when..." to ensure it’s worth seeing through to the end.

You can currently watch Wizard Barristers in streaming form via Crunchyroll.

7
The jury finds the defendant entertaining and enjoyable!