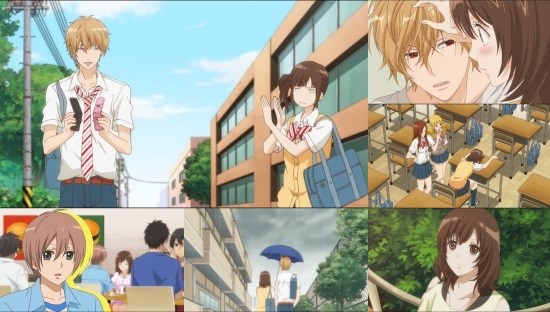 Stemming from the school of thought in romance anime of pairing two people together under unlikely circumstances and having love develop over time, Wolf Girl and Black Prince takes this premise and ultimately runs it into the ground.

The trouble stems from the personalities of two romantic leads in general. Heroine Erika Shinohara is basically the romantic anime heroine version of that kid in your class who claimed his uncle worked at Nintendo; a character who always exaggerates things to make herself seem more interesting to appeal to as many people as possible. Her main love interest Kyouya Sata meanwhile is the culmination of every worst aspect of the jerk boyfriend cliché with none of the redeeming aspects to save himself. The unlikely pair come together due to Erika's bad habit of lying to impress people - after claiming she had a boyfriend, she manages to convince Kyouya to agree to pretend to be her boyfriend under the condition that she becomes his dog, which leads to him treating her in rather terrible ways.

At first things fall into the typical clichés that other shows have with a similar premise have used, with one party having the other do various things for them in exchange for keeping up appearances. Things become problematic when Erika starts to realise that she is actually developing feelings of love for Kyouya - a revelation which in itself is a case of mixed feelings for Erika; happy that she is in love with someone so close to her already but hating herself for loving someone that treats her the way he does. This at times makes the series a very frustrating experience due to the message that it gives out in this regard - that it is okay to love someone even when they mess with your emotions. The biggest and most offensive display of this is when the couple actually have a fight.

This scene and its resolution not only displays what is wrong with the character's personalities, but also the way in which the love story is handled and how little intelligence the series thinks it's viewers has. The whole scene is resolved without the guilty party even apologising or recognising their mistake and the victim in the whole thing is merely won over with a gift, which is really insulting to say the least. The series also tries to throw in some opposition to break up Kyouya and Erika's relationship, but these scenes come out of nowhere and don't have the reaction intended - usually in romance anime when people try to get between the main couple there is some feeling of wanting their attempt to fail, whereas in Wolf Girl and Black Prince there is none of this. The drama aspect is completely lost as there is little to no motivation to wanting to see the couple remain together.

Another big detractor to the series is that the supporting cast of characters is just as bad as the main cast. The characters who Erika wanted to impress are girls who only talk about their boyfriends and don't seem to show any interest in anything other than idle gossip and chatter that occurs during their breaks between classes where they make an appearance. The series also introduces rivals for Kyouya but these characters seem to vanish as quickly as they appear and seem to just give up for no discernable reason. The only character that is actually decent is the voice of reason in the show, Erika's close friend who is also in the same class as Kyouya. Unfortunately the series seems to forget she exists and she is relegated to a mere background character who steps to the fore only when things get a little too out of hand.

While Wolf Girl and Black Prince does things by the numbers in most of its events and scenes, the personalities of the characters really do dampen the experience, and at times the show becomes really frustrating to watch. However, along with this there is something rather fascinating and entrancing about it - there are no characters to root for; the romance and drama are non existent; plot points and events have been done to death in various other anime. Yet, there is a strange compulsion to see how things will progress and how haphazardly the anime handles each given situation.  In this regards it acts more as an instructional video in how not to make a shoujo series, only providing entertainment in its demonstrations of how events should not be handled.

You can currently watch Wolf Girl and Black Prince in streaming form on Crunchyroll.

3
Frustrating and insulting at the best of times, banal during the rest. Viewable only for those who want to see how not to make a shoujo romance series.