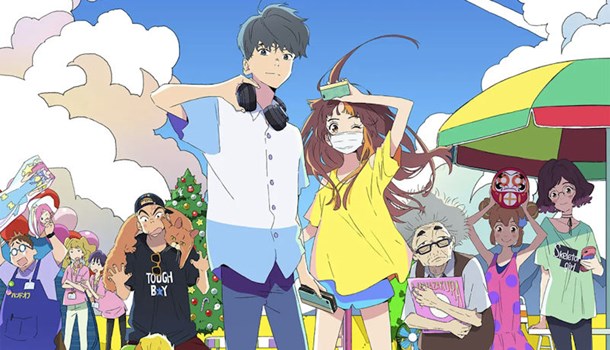 A movie about a girl who hides behind a face mask probably sounded a bit more offbeat when it was announced in late 2019, but months of pandemic-related delays have given this uplifting Netflix Original more relatability than initially intended. There’s nary a mention of viruses or vaccines in the vibrant and wholesome Words Bubble Up Like Soda Pop, however, with self-conscious influencer Smile instead masking up to hide her namesake teethy grin.

Created to celebrate the belated 10th anniversary of anime-centric record label FlyingDog, the film charts a romance between Smile and a reclusive poet nicknamed Cherry, who’s always wearing headphones in an attempt to avoid conversation. They collide – quite literally, true to teen rom-com form – during a trip to the big shopping centre where the majority of the film takes place, and gradually help each other to overcome their insecurities.

It’s light and breezy viewing that draws heavily from the digital-age dramas of Makoto Shinkai, as we see the pair connect via Smile’s livestreams and Cherry’s haiku tweets. One scene depicts their communication through a split-screen montage that’s particularly reminiscent of Your Name, and the film pulls straight from the romance anime playbook for its sentimental final act.

But while Shinkai’s work is characterised by its modern sensibilities, Soda Pop revels in retrospective themes and imagery. Halfway through the tight 87-minute running time, the plot makes a slight shift in focus inspired by its musical roots as Smile and Cherry come across an old man who wanders the retail complex in search of a missing vinyl record, cradling its empty 12” sleeve. The two of course agree to help him and learn his story in a lovely tribute to analogue media.

This nostalgic approach extends to the movie’s whimsical aesthetic, which evokes the anime of the Eighties with a wonderfully vibrant colour palette. It’s cut from the same cloth as fellow Netflix Original The Great Pretender in this regard, and reflects the streaming service’s confidence in licensing bright and colourful productions for a Western audience. It’s an absolute treat to look at and helps to carry the more clichéd elements of the story.

Words Bubble Up Like Soda Pop may be a little too derivative to instantly snap up the attention of more seasoned anime fans, but its brevity and easy-going nature make it a great way for Netflix to appeal to the uninitiated. It’s a nice change of pace from the multi-season series and spin-off films that are dominating the anime landscape in the West right now and an easy recommendation for anyone looking for a laid-back summer movie.