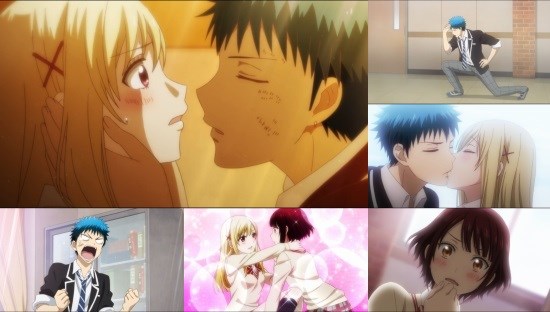 Yamada-kun and the Seven Witches

Having built up a reputation in school as a delinquent, Ryuu Yamada finds himself bored with school life due to the isolation he finds himself mired in. Things get flipped around rather literally when an accidental fall down a flight of stairs causes him to swap bodies with top student in his class Urarara Shiraishi. After several attempts to swap bodies back, they discover that kissing one another will not only reverse the effect, but can also be multiple times with various people. As it transpires, Yamada and Shiraishi find themselves becoming part of the newly reformed supernatural studies club in order to give them a safe haven to not only swap bodies, but also to investigate how Shiraishi and her power ties into the school's mystery of the seven witches.

From the outset, Yamada-kun and the Seven Witches firmly builds itself up as a Freaky Friday style comedy, with body-swapping being the main order of business and the setup for most situations that the characters find themselves in. As the body swapping is done via kissing, expect a lot of such moments between Yamada and several other characters. While the aspect of having characters constantly kissing one another may sound rather off-putting and awkward, the series handles this aspect very comedically and manages to integrate it very effectively via how important it can be at times, tying deeply as it does into the main plot of the series.

The plot in question revolves around a school-wide witch hunt, with Yamada needing to find six other girls in the school who have powers that are activated through kissing. Within the scope of the twelve episodes the series sets itself into a fairly predictable routine of giving each of the girls in question an episode or two in order to establish their character, power and situation, and then provides a resolution to the given problem they are facing. While this is enough time to get the characters together and resolve the main plot, things feel a tad rushed with regards to the characters - most of the cast is given very little screen time while the main characters of the supernatural studies club get most of the attention and development.

While this point isn't a huge detriment to the series, it feels like it wastes some opportunities to show more of the characters and their powers in detail, which is a bit of an annoyance even if the main plot itself is rather focused. That focus is especially apparent during the last set of episodes and how the story resolves itself, during which time there are a few dramatic moments which also tie into some rather comedic interactions between the cast member. That said, some moments surrounding finding out the identities of the witches feel very spontaneous with very little detail given to how they managed to find a character save for plot convenience. Usually, this sense of things "just happening" with very little reason would be frustrating, but given the context and tone the series has gone for it works really well.

Although its comedy broadly works, there are a few problems. For example, the over-reliance on body swap humour in the earlier episodes can wear a bit thin. Also, Yamada himself doesn't really have much in the way of character to grasp onto in order to make him that memorable a protagonist - a problem which can be ascribed to some of the other main characters. Again, this mainly ties in to the witches and the amount of screen time and attention they are given, while some of the main cast of characters also feel like they should have been given a bigger role or more to do within the context of the story and seem like they only appear at opportune moments. Finally, there is a certain romance aspect to the series which isn't really handled all that well due to comedy taking much of the main attention of the show.

Overall though, Yamada-kun and the Seven Witches is a rather enjoyable show, and works pretty well for those wanting a fun supernatural comedy series about body-swapping, spit-swapping and after school witch hunting.

You can currently watch Yamada-kun and the Seven Witches in streaming form on Crunchyroll.