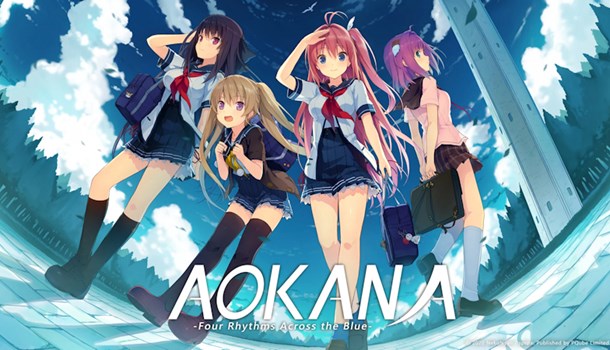 Aokana - Four Rhythms Across the Blue is one in a series of romantic visual novels, with the decisions that you make changing the story. The game was originally released for Windows in 2014 and has since been ported to the PlayStation Vita, PS4 and Nintendo Switch. It has several spin-off games, as well as a manga adaptation which was released in 2015 and an anime adaptation released in 2016.

The game is based around the premise of anti-gravity footwear, which was discovered by scientists using the Hadron Collider. The Grav-shoes are used in place of vehicles that use fossil fuels, lots of countries have restrictions on them but, in Shitou, which is located on the four-island archipelago south of Japan, they don’t have as many restrictions - students are even given them as a way to commute to school. They are also used in a sport called the Flying Circus, a one on one race/battle where the player must either hit buoys in a clockwise order or get points by hitting their opponent’s backs. There are three classes of player; Speeder, who tries to score points by hitting the buoys first, Fighter, who gets points by hitting their opponents, and All-Rounder who does a combination of both.

The plot centres around Masaya Hinata, who was a prodigy at the Flying Circus, but had some traumatic experience and now refuses to play. It's a standard anime sport plot. He meets new-girl Asuka Kurashina who has never worn Grav-Shoes before, and her enthusiasm for flying makes Hinata nostalgic. Not long after, he is convinced to join the Flying Circus as the team’s new coach. 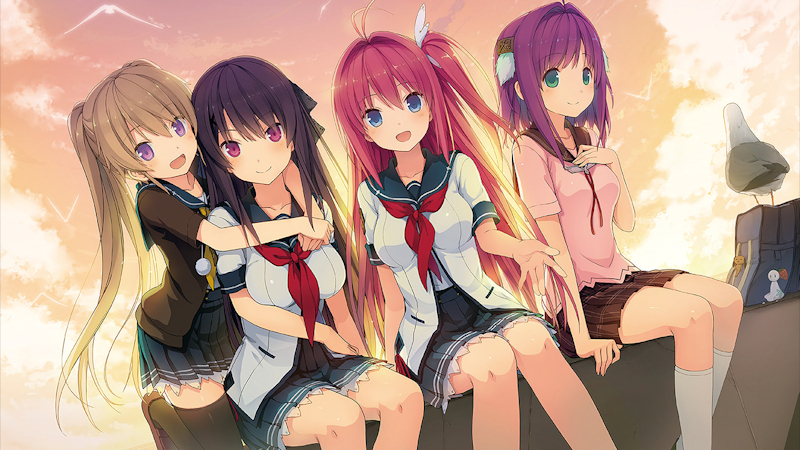 From left to right: Mashiro, Misaki, Asuka and Rika

As the story progresses you get to know the members of the Flying Circus and even romance them. First there’s the aforementioned Asuka Kurashina wo acts as the audience stand-in. As such she’s the most inexperienced member of the team and all the exposition about the Grav-shoes and the Flying Circus comes through interacting with her. Asuka is the bubbly happy girl who has some serious talent, though she's clumsy in the air and and needs polish - her flying style is All Rounder. Next is Misaki Tobisawa, who is Hinata’s classmate and friend before the game. She’s an ace character, someone’s who is good at everything she does without even trying. She’s also our Big Eater and her first priority is always food. Her flying style is Fighter. Last of the (playing) girls on the team is Mashiro Arisaka, who joins the team to be near Misaki. She is the youngest member of the team and physically the weakest, and because her flying style is plot related,..no spoilers!

Rounding off the team is Shion and Madoka Aoyagi. Shion is the president of the club and a Speeder, he is one of the funniest characters, with his enthusiasm for speed and muscles are some of the games most comedic moments. Madoka is the team’s manager and much more level-headed than her brother, with a teasing and fun personality. Aoi Kagami, the FC club’s adviser, homeroom teacher and physical education teacher. She is Hinata's old trainer and we get a lot of flashbacks through her, learning more of Hinata’s ‘traumatic’ past.

The last of the romance-able characters is Rika Ichinose, who goes to a rival school where she’s also in the Flying Club as a Speeder. Rika moves in next door to Hinata near the beginning of the story and is a lot more serious and responsible than the other girls, though she often judges situations and people too quickly.

The first thing you'll notice is that there isn’t much in way of gameplay here. You get about one decision for every hour of play - the game is more focused on learning about the characters and about the Flying Circus. The only real antagonists show up quite late in the game, which makes sense as the plot is character driven and you, the player, are getting to know the characters as the game moves forward, but even most of your rivals are quite friendly, and sportsmanship is generally emphasised as being important.

The graphic are, for the most part, beautiful with three different styles. The first is the general style, which looks like a normal anime, the second is the comedic style, where the characters are chibified and the outlines are bolder. The last is the flashback, where everything becomes sepia tone, I find this style beautiful there are some water marks that suggest either ink or watercolour which gives the art a ‘hand drawn’ feel.

My only complaint for the graphics is the when the characters are in the normal anime style and they get upset, their eyes are the >_< style, the line on the eyes are too bold and look more like the chibi style. It can be a bit jarring and bring you out of the game.

The character designs are cute, Asuka and Misaki’s faces and body types are the most similar in design, with Misaki’s hair being dark and Asuka’s being lighter and pink. Mashiro’s design is the most unusual, what with her being slightly younger than the other three girls, I also find her hair the cutest. 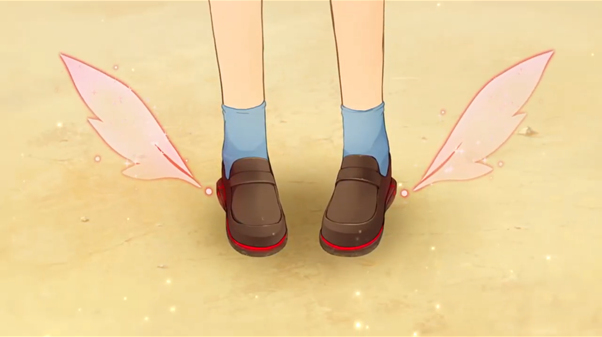 I like the idea of basing the wing design on the shoes of Hermes, the Greek messenger God - it’s a nice little nod to mythology. I am slightly concerned about the normal Grav-Shoes, that seem to be slip on shoes, it seems rather dangerous. When I was a kid a girl tried to kick me with slip on shoes on and it hit her in the face, so I’m not confident in their ability to stay on someone’s foot while they’re flying. The competitive Grav-Shoes are designed more like boots and make more sense.

The music in the game is enjoyable, the theme song is bouncy and fun, the background music isn’t distracting from the story either, which is important. I like the comedic music quite a lot, and when used it fits the scenes well. There’s also a point in the game where the music stops for dramatic effect and it made me hold my breath - it made me pay real attention to the story and hyped me up for what was happening; the music is used very effectively throughout.

There are some issues with the graphics. There was a problem with a white box just randomly appearing over characters. There is also a problem when pressing the A button to move the dialogue along, as it sometimes races ahead two or three dialogue lines, Luckily if you press the L button you can read the most current dialogue, you can also rewind the dialogue with the LZ button.

My main issues with the game are with the dialogue, which is very repetitive, and I just wanted the characters to get to the point of the conversation without all the awkward pauses, and ‘sorry’s’ and ‘erm’s’. Fortunately if the dialogue is becoming irritating you can also fast-forward through its more annoying places with the RZ button.

Overall, the game has a cute style, and a long story, which makes it good value for money, I was a little disappointed at how few choices you get to make as there are large chunks of story between choices. The four girls have very different, if stereotypical, personalities, so you don’t feel as if you're talking to recoloured character model. The strength of the game is the large amount of time it spends letting you get to know the different characters, so if you love learning character stories this is the game for you.

7
Personally I like a bit more interaction in my games, but I can see the appeal for the audience it is aimed at.
LATEST REVIEWS