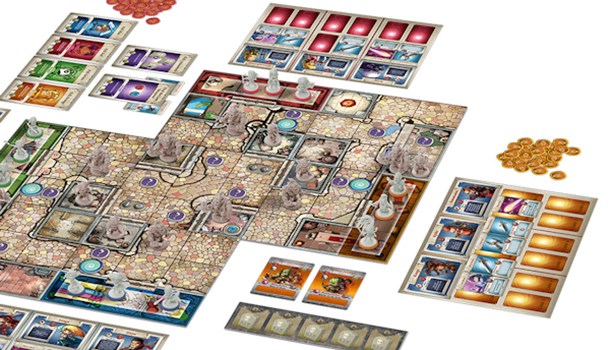 The world was once only inhabited by marauding Orcs and dancing Elves, but the gods got bored and introduced the humans! The humans built the great city of Arcadia and the land was ruled by King David, much to the dislike of the Orcs and Elves and war ensued. The wars were won by the humans and King David set up various guilds in order to keep the peace.

However, the evil Lord Fang (a vampire) was perturbed at the fact that the humans had set in motion the day and night rotation of the world and forced him to have ‘bedtime’. He gradually gathered the support of Orcs, Goblins, Trolls and other minions to form a ‘Dark Council’ and together they eventually took over the city.

As a guild leader it is your job, along with other guilds, to take back control of the city. To do this you must move through different districts, confronting enemies and maybe even opposing guilds. Your heroes will grow in strength until you finally take on Lord Fang in the finale. The guild that proves the most successful in the fight to restore the humans to power will be the winners and become the new protectors of the realm.

I usually like to give an overview of the rules and how a game plays in order to give readers an idea of whether they will like the dynamics, but it can be tricky to try and simplify a whole rule booklet into a few paragraphs. In the case of Arcadia Quest this is going to prove damn near impossible, as I had to work through a 36-page rulebook/manual – it was bedtime reading for a couple of evenings!

So please understand that this a very, very brief overview of how the game works:

Before you start your quest, you need to choose a guild (four available) and three heros to join it. Each character has particular strengths, abilities and life force. You place the card with their details on onto your guild dashboard and add the base of your corresponding guild colour to the three miniature figures for your characters.

A full campaign to re-take the city consists of playing six different scenarios. These are chosen one at a time from eleven different one available – the next scenario is always chosen by the most successful guild in the previous one. If you only want to play a quick game you can just choose to play a single scenario.

Setting up a scenario starts with laying out a map as dictated in the campaign booklet. On top of the map you are shown where to locate various rewards, portals and enemies. You are also instructed where to place your characters at the start of the round.

Players take turns moving their characters round the map in an attempt to complete quest, whilst also collecting rewards and taking out enemies. Each scenario has various quest cards attached to it which are laid out for everyone to see. To complete a scenario in a two-player game you must fulfil two quests or for three or four players it’s three.

Combat with monsters and other guilds involves dice rolling for both damage and defence. Characters individual abilities, weapons they posses and other artefacts they hold, all dictate how many dice they role and even if they are permitted re-rolls. They will inevitably take damage in the form of wounds and maybe even death. Taking a rest turn can help revive your characters and they will always be re-instated for the next scenario, although a ‘death curse’ may linger over them.

Arcadia Quest has proven hugely popular, which has led to a variety of expansions as well as additional character/miniatures that can be added in. Here are a few examples:

For starters I must say; don’t let the size of the rulebook put you off! Yes, this one isn’t for the faint-hearted gamer, but let us be honest, you wouldn’t pay the £70 price tag if you weren’t prepared to invest some time into this one. This is a really complex and intricate game in terms of variation in scenarios, hero selection, reward cards and enemies. However, the game-play itself is fairly straight forward as soon as you get your head round a few of the dynamics, unique to the game.

Playing one scenario takes about 10-15 mins to set up and then 20-30 mins to play and so to play the full four scenarios that make up a full quest can take several hours. This may not appeal to many so the game is well designed so that you can record your guild heros’ status and possessions after each scenario so that you can pack it away and come back to it another time to continue your quest. It is also possible to get the game out and just play one or more scenarios rather than a full quest.

The quality of what you are getting with this game is excellent (aside from the fact they could possibly have made the instructions more concise). The miniatures for both the heros’ and the monsters are beautifully designed with amazing detail and the perfect size to allow you hours of fun painting them if that’s something you enjoy. Compared to the rest of the game and its characters I found the guild artwork to be quite basic and feel that better names, themes and artwork could have been used rather than the basic animal guilds that you get here.

If you want the victory, selecting the right heroes is key so make sure you look carefully at their individual abilities rather than just picking the ones that look the coolest (I point this out as it is usually my downfall). Selecting the right rewards at the end of each scenario is also hugely important so don’t under-estimate the importance of earning gold in each round so you can afford these.

You only have to look at the huge list of available add-ons for this game to realise that it has proven hugely popular and I completely understand why. The things I enjoy most about this game are the cute characters with their varying abilities and the level-up dynamic which allows you to build up the strength of your heros as the game progresses. The monsters also become progressively tougher, meaning that the game has great build-up to the final show-down. This isn’t a game I’d get out with my casual gaming fans – the one who are actually more interest in the wine on offer, than what games we are playing – but I’ll definitely be getting it out for the hard core ones!

9
Dungeon Crawling at it's best!!!