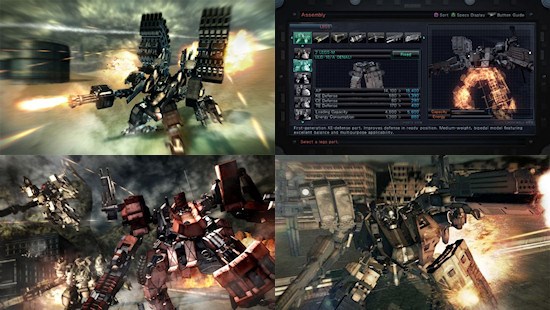 When I first heard that this game was coming to our shores, I was very, very excited.

FROM Software have previously delivered two of my most cherished games of recent times; the brutal Demon's Souls and the ever so beautiful Dark Souls. For me these two games are gaming heaven, in a sea of "press X to win" FPS titles it was great to actually have a challenge back again. I’d heard of Armored Core 5 quite a while ago, it was ever-so briefly shown on one of the making of Dark Souls DVDs that showed part of the team working on AC:5; from then I'd have this in the back of my mind as something to look forward to, and I had also heard that FROM were implementing new ideas into this rather drawn out mecha series. To say that my interest was piqued would have been an understatement.

The game is all based around being in an online team; a team which you must find and join, or create yourself, and start earning points for. Being in a team allows you to band together and go off on missions together (although this affects your pay), capturing territories on the map to help your team earn points and more importantly, newer parts for your rusty monster. Teams can have strengths and weaknesses, which is where fans of strategy can really have a huge impact on these online dog-fights. Teams can also trade parts with one another as well.

I must say, the level of customization in this game is truly epic - I had a good idea that it would, but seeing the level of detail you can apply really is a great achievement by FROM. It started when I figured out I really liked the Gatling gun on my left arm, so that brought me to decide upon putting a Gatling gun on my right arm too, and oh boy was that fun! The sound as I was tearing through tanks and choppers was wonderful - however, a word of warning. There are three different type of weapon types you can fit onto your five metre robot of destruction: Thermal, Chemical and Kinetic, some of which are more effective than others against enemies (think a Charizard versus a Venusaur, but with more missiles and lasers...). Seriously, from swords to shotguns and onwards to cannons and the blistering UWs, you can pretty much do what you want. Want to snipe from far away on tank tracks? Sure. Want to stealth it and track your enemy before delivering the killing blow? Knock yourself out. Want to just get in his face and deliver some pain cake? Go for it.

While Armored Core 5 offers little in the way of storytelling, the story missions themselves can prove quite a challenge, especially when played alone. The game does help out by providing a rather useful checkpoint system and there are bays that you can find to repair yourself by entering Scan Mode, also allowing you to get a better look at what’s going on around you. I think this definitely helps newer players get into the game. There can be an awful lot of things going on at once and it can get rather hectic, which unfortunately serves to bring the frame rate down somewhat. Some of the visuals can be quite hit and miss at times to boot - the game looks quite grainy and it certainly does lack some polish seen in the Souls games; however, AC:5 is pure chaos at heart, and I've got a thirst for it.

Looking at all the teams in-game at the moment I hope people stick with it, and we get to have some really fierce team battles. I feel like the online community can really either make or break this title, so jump on-board and get stuck in.

8
Slight visual and frame rate flaws don't overshadow the tonnes of customisation and chaotic fun to be had in this game.
LATEST REVIEWS