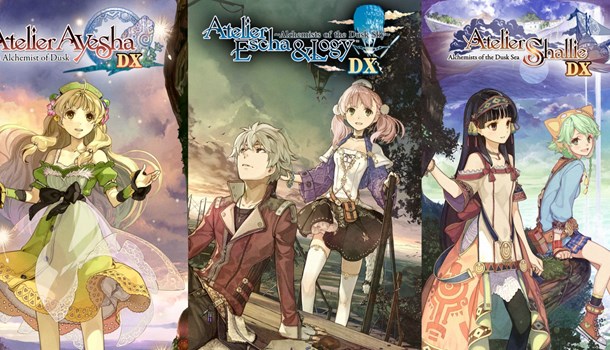 Whilst they are being sold as a pack of games, they can be purchased individually. Each game is a fairly lengthy RPG in it's own right, which (on average) can take 20 – 40 hours to complete depending on how quickly the player decides to advance through the game. Each game follows the same archetype set out by this series of games with slight differences to how some of the gameplay mechanics work. In general the game follows a tried and tested loop of collecting items, synthesising items, battling monsters, exploring areas and undertaking requests in order to complete tasks relative the main story of the game. For the most part the main loop is in service of strengthening your characters in order to explore more dangerous areas to collect rarer materials and gain access to synthesise better items to help on your adventure. Each game has several mechanics tied into this and plot relevant reasons for there being so in order to give a bit of weight to this aspect of the game.

To begin with Atelier Ayesha; the game's heroine must learn more about alchemy in order to save her lost sister who was mysteriously spirited away. The game sets a target of three years for the player to save Ayesha's sister. This is where the biggest factor of the Atelier series comes into play; time management. Almost every action in the Atelier series makes time progress. Synthesising(creating items via alchemy) makes time pass by a certain amount of days depending on the quality and/or quantity of items being created. Travelling from one area to another makes days progress, and even gathering items and battling monsters will clock up the hours. This in turn makes the player more conscious about their actions and force planning of how best to spend their time. As things progress there are items and skills that can be used to make actions take up less time, such as shoes that make the player spend less days travelling the world map, or equipment that allows the player to yield more items from gathering sessions in the fields. While all this is in place, the game is rather forgiving as there is really only one major time based quest in the grand scheme of things.

Atelier Ayesha handles its quests through a notebook that will suggest the player do certain things; such as exploring an area, creating an item and talking to certain characters. Once completed these award the player memory points that go towards unlocking memories for Ayesha to add to her journal. Once filled, these grant the player bonuses such as increased stats, skills or bonuses.

Along with this there is a newly added board of requests that tie into the DX aspect of this release. By completing these requests and filling out all nine panels on a board, the player is granted bonus concept art, new costumes that were DLC on the PS3 version and even new quality of life improvements to the game such as the ability to change out party members at any point in the game rather than having to travel where they are to speak to them.

Speaking of quality of life improvements, this version has added the ability to speed up the battles, skip dialogue and added a run button. All of these are nice little touches for players familiar with the game and just want to speed up the process.

The battle system is a turn based affair with a party of three characters battling against monsters, with each having specific skills and attacks that can be utilised. There are several types of skills; standard skills that rely on MP to activate and others that rely on a gauge that fills when actions are taken - these can be used to defend or follow up attacks from other party members. Finally there is a special attack for each member that is unlocked when the characters hit a certain level.

For the most part the main crux of the battle carries out like a standard JRPG affair, but with a few things to consider. Characters can move to one of a few designated spots during their turn. The main point of this is to spread out the characters so that "Area of effect" attacks from enemies do minimal damage - certain skills also require the characters to be spread out from each other to activate successfully. Tied into this is the area of effect radius from items the player can use. Having your characters stay close together will mean that power-up items will be more beneficial to multiple characters. With regards to items; only alchemist characters can use them. For most of the game this will of course be Ayesha, who is the alchemist of the game. Stored in Ayeasha's basket, items can consist of bombs, various attack items, healing and status buff items. Having only the alchemist characters be able to use items adds another layer of strategy to battles, which require some plannning to make the most of all aspects of the battle system. Since items have to be crafted, players are incentivised to constantly create newer, stronger items to use in battle.

This game takes place a few years after the events of Atelier Ayesha and focuses on the two alchemists who are researchers; they are investigating mysterious ruins and also taking time to improve the town.

The time management in this game breaks revolves around a board full of tasks to complete in order to advance the story, with time broken up into quarter-yearly chunks. These tasks are broken into 9 major tasks and 16 bonus tasks that when completed will offer points in order to rank up and gain bonuses based on a tic-tac-toe system. here,  lines filled in will grant goodies such as new alchemy recipes, stat bonuses and new items.

The game has an alchemy system and battle system that are fairly similar to Atelier Ayesha. The main difference in the Alchemy system is that elemental bonuses have more of an affect on things as element points are used for alchemy skills when synthesising.

The battle system is also alterted, allowing a team of six characters, with three in the front and three in the back. This allows characters to switch in and out between rows during a battle, adding new strategies. The game also changes up the items by placing them in their own inventory space and having each item now take up squares on a grid (like the suitcase in Resident Evil). So you must conserve as much space as possible, with powerful items taking up more space in your inventory, so item management is more involved. The game also adds a great system where items are replenished after coming back to town, with a monthly salary making money less of a concern in this game.

Finally, Atelier Shallie focuses on two characters; Shallistera and Shallote. Both have their own unique story that can be played one after the other thanks to the New Game Plus mode. The big difference for Shallie in relation to the other two games is the complete removal of the calendar/time system. With these now absent, there are no deadlines to adhere to, allowing the player complete freedom to explore and do whatever they want at their own pace. The game gives players some guidance through the "idea system". Once the player has completed enough of the suggested tasks, they can advance the plot.

The game is broken up into chapters, each with a set goal required to advance. The big difference in Atelier Shallie with regards to the alchemy system is that items now have slots when synthesising on which you can allocate skills. These include elements such as enhancing certain attributes of the item, bringing down the item's cost so it can be used in the synthesis, and even the item quality. It feels more refined than the system used in Atelier Escha & Logy.

The battles are more traditionally turn-based than before too. Gone is the ability to move on the battlefield, but with an added burst gauge that, when activated, adds several bonuses to attacks used by the party.

As a package then, all three games are great RPGs that can be played as standalone affairs. Each game has its own independent story that doesn't really require knowledge of the previous one to enjoy. Characters from previous games do make cameos, but a working knowledge of their adventures isn't required/

What makes this series so great is the freedom it gives the player in trying out new things and exploring. The games have a really laid back approach, with fun characters, great designs and beautiful music. The score in particular really adds to the barren feel of the dusk world, being gentle in dungeons and towns then picking up dramatically when battles occur.

If you've never played an atelier game before these are a great place to start. If you've played these games before on Playstation 3 I'd still recommend them. The addition of the new costumes and mechanics to speed up battles and dialogues really help move things along. No matter how you choose to play them, these games provide a fun, laid back RPG experience.

The Atelier Dusk Trilogy is also available on Windows PC and Nintendo Switch.

8
A fun collection of JRPGs that make great use of your time.