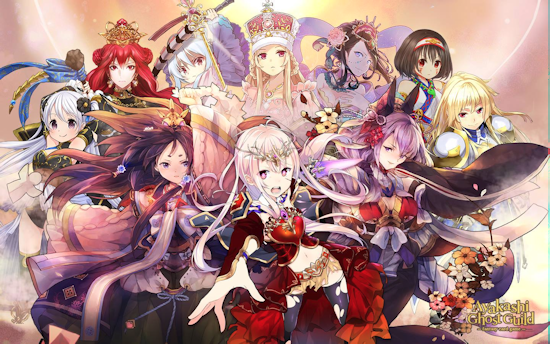 In a distinctly Japanese flavoured twist on the customisable card game (CCG), take the plunge into the world of ghost taming as you join the Ayakashi Ghost Guild and start collecting ghostly beings to aid you through your quest. Along the way, your very cute paranormal assistant Mira will report back to you and guide you through the game.

Getting to grips with a CCG

The game is split into three major areas: story mode has you tapping your way through a series of areas while a story unfolds. Your only task here is to press a single button to progress, with the occasional free card or stone (more on this later) appearing. Thankfully the story is quite interesting, making the dull repetitiveness of the game rather less offensive. At the end of each investigation you'll battle a ghost which, after being subdued, can be negotiated with to join your deck. If you have money to burn, you can buy cabal chains which can be used to make any negotiation successful.

Next up you have the battle mode, which has you taking on other players to steal stones - collect six of one type and you unlock a rare card. It's a bit hit or miss, but the basic rule of thumb is to have the best deck you can and cross your fingers, targetting anyone with a low defence score. This can get a bit frustrating, especially when you get that dreaded message popping up to tell you that you've lost a battle and one of your precious stones.

The next major area of play is the fusion room. Here you can fuse cards of a similar type to boost their abilities, and this is where you'll enhance your deck. Summon points of particular cards don't change, so the more you power them up, the more chance you'll have in battles.

Everything in the game encourages you to engage with the system and collect cards. For your first seven days, you'll get a free gift every time you log in, including two rare summons.

You can team up with other players, and if you poke them every day you'll earn summon points - the number of partners you can have increases as you level up, so the more you play, the more people you can poke and the more cards you'll get.

Log in each day and get a silver apple - these can be exchanged in Dora's swap shop for rare cards and items.  Events are scheduled to earn exclusive cards; it's really quite relentless.

So why put yourself through this agonizing grind? Why sell your soul to your phone for a constant barrage of nannying and grief? Well, the artwork is gorgeous for a start. They've really captured a beautiful style here, and almost all the cards are worth owning just to moon over how pretty they are. It's also hideously addictive - by draining your health as you play the story mode, it forces you to take a break and explore the other facets of the game while your health bar recharges in order to take on the story once more.

It's a genuinely fun story too - not terribly original and full of stereotypical characters such as the mysterious stranger with a good heart, bad girl with a sexy smile, cute sidekick... it just needs a bald man in a bad suit stroking a cat and it's got every angle covered. It's a solid and charming tale, and if you're prepared to become addicted, the entry price is a bargain.

I've never been a fan of card games like this. Sure, I dabbled with the Star Trek game as a teenager, and I own a complete set of the Ani-Mayhem BubbleGum Crisis and Tenchi Muyo decks, but I've never been obsessed. With Ayakashi I can finally see the appeal such games have, and while the mechanics might be a bit limited, it still boasts enough character and sparkle to make it worth a punt.

If you do take the plunge, come find me - as ever, my online handle is Acteon.

8
Addictive and really rather evil (in a tempting-your-wallet kinda way), Ayakashi has the anime themed CCG market to itself, and does a grand job with it.