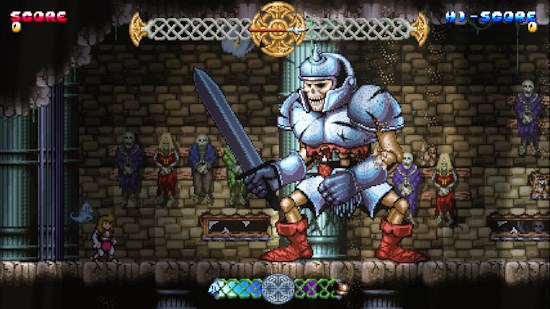 If you're into retro games, or like me, are old enough to remember sumptuous pixel-art the first time around in the 80's and 90's, you'll likely gravitate towards Battle Princess Madelyne. It's a game with a serious homage-on (by the creator's own admission) for Ghouls 'n Ghosts, the Capcom arcade platformer designed to crush your spirit with a difficulty curve that can only be described as hellish.

Funded on Kickstarter within 3 days back in March of 2017, the game has taken a while to reach us, and had a particularly rocky start on the Switch, with the release delayed while patches were applied. Was it worth the wait?

The game is obviously made with love - Chris Obritsch created the game for his daughter to prove that girls can be Knights too, and what we're presented with is a lavish looking game of the old school - SNES style pastels with detailed pixel-sprites that fairly dance across the screen. Being made for a modern system, it doesn't have to hold back on the sprite scaling, animation or effects, so what we're presented with is pretty much "old-school plus". There are other pixel-art style games on the Switch, but I can't think of one that's quite as lush as this.

Controls are solid, with Madelyne being quite sprightly, eventually gaining a double-jump that's incredibly handy.

There's plenty of content too - there are two modes, arcade and story, with the latter adding side-quests, dialogue and areas to explore. However, there are some unfortunate elements creeping into this mode, with some cheap deaths (mostly leaps of faith, since you can't scroll the screen) and the requirement of keys for every door, so if you're not paying attention you could miss something vital and have to slog all the way back to an earlier area to find the key you need.

The quest instructions given to you by villagers are never repeated, so I recommend having a pen and paper handy. What was needed here was a menu area with quest details stored for future reference, a'la Zelda.

Upgrades are handled via requests from Blacksmiths, with shards earned being used for much-needed extra expansions. It adds longevity at the expense of entertainment, so it's not an ideal mechanic by any means.

The arcade mode is far more immediate, and plays much like the aforementioned Capcom classic. Upgrades and coins are dropped by defeated enemies and your score is kept at the top of the screen, although bizarrely it isn't kept on a scoreboard for you to beat on another runthrough. It's a bit of a rookie error and betrays the Kickstarter nature of the product.

In fact that pretty much sums up the game here - it's a lovely looking homage to a far better game, with unfinished elements that detract somewhat from the overall experience, most of which are just a revision or two away from vastly improving the game. There's no reason why some update patches couldn't attend to most of the issues I've highlighted, and I really hope those come down the pipe in the future. They could turn a decent enough game into a real winner.

So there we have it - a labour of love, lacking polish. There's much to admire in the game, and arcade mode is definitely the way to appreciate the best it has to offer, but it's a long way from beating Ghouls 'n Ghosts, the game from which it draws so much inspiration.

7
The game lacks polish, and as is feels somewhat incomplete, but there is fun to be had here, especially in Arcade mode.