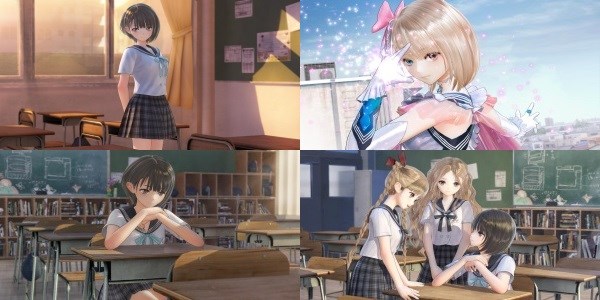 After an extended leave of absence from school following a leg injury; Hinako Shirai returns to school and with the help of her two sisters, Lime and Yuzu Shijou, she becomes a magical girl. The magical girl trio work hard in order to gather fragments that appear from girls in the school whose emotions go rampant. These fragments give them the strength to defend their school from demons known as “Sephira.” Defeating the Sephira also comes with the promise of any wish that can be granted. Hinako hopes to wish for her leg to heal in order to take up ballet again. A passion she had to give up on due to her leg injury. Will Hinako manage to get her wish fulfilled? Will she defeat the demons? Read on to find out.

Blue Reflection is a turn based RPG featuring a few interesting mechanics with its levelling and combat but everything else is bogged down by repetitive game play sections and a rather linear story, at least compared to what I am used to. To start with, Blue Reflection takes the standard turn-based RPG mechanic and bases its combat on exploiting attack wait times. There is a time bar on the top of the screen that shows in real time which player character or enemy has the next turn. The main goal in battle is to prevent your opponent from taking turns and reducing the time it takes for their characters to have their next turn. Each character have hit-points (HP) and magic-points (MP) which used for attacks, but special items can't be used within battles. Items can instead be used before a battle so that the battle begins so that certain stat boosts such as attack up, defence up are added to the trio before they battle. As time goes by, more mechanics are added to the battles. These include speeding up characters and guarding. Both of which rely on another variable, ether. Ether has its own gauge and is gained by either selecting the ether gauge command or using skills that can increase it. The ether gauge also lets the characters use the overdrive ability. Depending on the amount of ether a character can chain together 2, 3 or 4 commands. Using the maximum amount of skills in overdrive also leads to a combination attack which does a lot of damage. This is quite a complex battle mechanic.

With regard to skills and levelling; the game does not award experience points from any encounter, instead only giving items that can be used in crafting and enhancing skills. Instead level gains are earned from quests, spending time with friends and during story points. The mechanic itself is interesting that it allows a level point to be added to one of four attributes. Attack, Defence, Support and Technical. Adding points a certain way leads to skills being learned. The game gives a list of what level each attribute needs to be for a certain skill to be learned. This is useful if the player wants to level up a character a certain way. However the game fails to mention the level cap is 50 so there will not be an opportunity to learn all the skills. That being said the game makes it really easy to gain levels. There were times where I was 15 levels over the required level needed to continue the story. This made the game feel really unbalanced and frankly rather easy to get through. Even putting the difficulty up to hard didn't help balance things out. Hard difficulty only seemed to double enemies HP, which didn't really solve the balancing issue since attacks still managed to kill enemies in one or two hits.

The game relies on the same ten character designs for enemies during the stories. It colours them differently as the game progresses. During story points that tie directly into characters’ backstories, the game still uses the same enemy designs and the battles are almost exactly the same as any random encounter making what should be a more dramatic moment into just a run of the mill task that is the same as everything else in the game.

Speaking of which, the game likes to reuse the same set of missions throughout the entire storyline. Between story moments, the player can run around the school solving problems, talking with side characters and such. Here is where the game had potential to try something exciting with its school life concept. Something like Persona perhaps. Unfortunately each mission consists of one of three options: “go talk to a girl”, “get transported to the other world to either pick up loot” or “kill a certain amount of enemies and you’re done”.

Nearing the end of the game my patience was wearing thin at these limited mission choices. The rewards for completing these missions are items, most of which have the benefit of permanently increasing stats for the characters. There is also some side story sections involving the supporting cast of the game. These interactions reward the player with fragments from time to time.

The supporting cast are quite interesting as however most of which still fall into typical anime style tropes. You have the energetic athlete, the tsundere rival character, the genius character who doesn't really understand how to function in the real world and so forth. The game does a fairly mixed job with these supporting character’s stories. Most of which are fine and quite fun but some get really ridiculous. Some examples are one of the girls challenging Hinako to a rap battle out of nowhere and another has one of the girls be a live streamer. The cast is diverse and the stories are quite interesting but most of it feels like supplementary material that doesn't really tie all that much in with the main story. There are a few characters that are exceptions but there are twelve characters that the player can interact with most of them feel like they were added in to fill up the numbers. Along with this when Hinako is at home before going to bed she can do things to prepare for the next day.

The game tends to abuse the roles of the supporting characters by using these characters to pander to its audience. An example includes scenes of the girls in the swim suits, showering after swimming and being caught in the rain. These scenes are short, come out of nowhere and serve really no purpose other than fanservice. At times it feels like they are insulting the player by insinuating the only reason they're playing the game is for the cute girls. I don’t think that this is the case.

However, time for some positives, the visual presentation. I think that the character designs are great. Each individual cast member has a unique look. Unfortunately the enemy designs are reused and the backgrounds are quite nice but are very limited with a few dungeon environments being reused constantly. The available environments are very small with very few areas in each section as the game only uses these for missions and doesn't need the player to explore these. The best visuals though, are the Sephira; the bosses that show up sporadically in the story. They have really intimidating and menacing appearances which really add to the tension when fighting them.

Blue Reflection also has a great soundtrack which unfortunately doesn't get utilised well enough. Some scenes are missing audio, some cues are too early or late and overall feels kind of mismatched. At times when the cues are right the music really elevates scenes.

I believe that the Sephira boss battles are the best moments of the game as these boss battles take a long time and it really lets the player experiment with the battle system and have fun with it. I think that it is a pity that every other battle is over so quickly within the game. These boss battles really showcase how great it could have been if it hadn’t been so repetitive.

Blue Reflection has a lot of problems. The main one talked about previously is how repetitive the whole game is with it reusing the same mission structure over and over. The woes aren’t limited to the repetition. I found that the game also performed terribly at times (PS4 Original). I found that frame rates dropped during scenes with a lot of characters to render and during battles that have a lot of enemies being targeted. Also the game has some terrible translation errors. Typos, grammar errors and localisation issues are present throughout. I lost track of the amount of times I saw the character name “Lime” translated as “Raimu” when a random NPC would talk about her.

I also found the story to be terribly predictable towards the end. The writing tries to convey its twists as shocking and unexpected, and fails. While the story isn't bad, it kind of wears thin towards the end. And this pretty much describes my feelings on the game.

Initially I was really enjoying the game but as it progressed I felt my patience wearing thin and like I just had to finish it out of obligation more than anything else. There were some great moments here and there, and some rather inventive and clever aspects with its battle system. But the whole thing was brought down by the repetitiveness of the mission structure and other design aspects. It’s a game that had so much potential but is hindered by some of its execution.

6
Some great ideas bogged down with repetitive gameplay elements