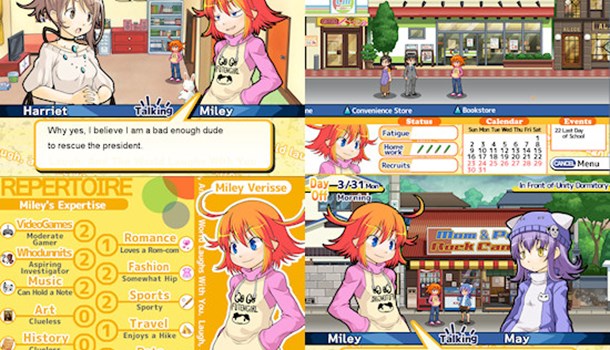 "Laugh, and the world laughs with you" is not only the well-known tagline for Cherry Tree High Comedy Club, but also a concept which the title's protagonist Miley Verisse seems to hold close to her heart - with a love of comedy and humour, her goal on embarking upon her high school life is creating - or rather, reforming - Cherry Tree High School's formerly much-vaunted comedy club.  As it only takes two people to make a successful comedy duo, this should be simplicity itself right?  If only that were true, as Miley is quickly informed by former friend and student council president Octavia that she will in fact need to recruit four additional members to her club to make the five-person requirement necessary to register said club.  What's more, she has little more than a month to do so!

So begins the premise of Cherry Tree High Comedy Club, a dating sim which features entirely no dating whatsoever.  Instead, Miley needs to find and persuade enough people to join her school club to make it viable in the permitted timeframe - with her best friend and room-mate Harriet already on board, this means picking up an additional three members before it's too late.

This is achieved, quite simply, by becoming close friends with some of the characters roaming around her school and town.  To become a suitably impressive buddy to these individuals and their varying interests, Miley's main task is to juggle getting to know the guys and girls she's set her sights on while also brushing up her knowledge of various conversational topics, from video games to romance and fashion to history.  This can be done in a number of ways - although some methods are free, others require money which in turn factors the requirement to take up a part-time job or two, while all of the various activities Miley can undertake cost that most precious of resources, time.

To build up her repertoire and expertise in various subjects, and to find potential targets to press-gang into joining her club, Miley has eight different locations to visit from shopping precinct through to her school, each offering their own set of activities and usual hang-outs for the other characters, giving opportunities to hone your skills or engage in chit-chat in the hope of "levelling up" your relationship with a given character to the point where they will give you their phone number (in turn enabling more opportunities to tighten your friendship) or ultimately sign up to the comedy club itself.

Essentially then, signing up to a game of Cherry Tree High Comedy Club involves lots of juggling your time and resources to find the optimum way of getting three (or more) new individuals to join your club from the six characters available - chatting with each character on a daily basis will give you hints as to where to focus your conversations in future and how best to hone your conversational skills, while improving your friendships occasionally opens up other opportunities for you.  There's a lot to consider at first, but you'll soon find yourself planning out your days and the three segments into which they are broken with relative ease.

In terms of actually playing the game, things really couldn't be simpler - although the lack of mouse input can be a little frustrating in places (the game is keyboard-only throughout), exploring the town and interacting with relevant items is simplicity itself, and the game's menu system allows you to keep track of your inventory and the core level of your relationships with ease to aid you in making the best possible decisions moving forward.  The game also looks pretty good for the most part despite its simplicity - character designs are well-defined and nice-looking in both their main and sprite-based forms, and although there aren't that many locations to explore they're all sufficiently detailed and illustrated to give the game a nice layer of polish in terms of presentation.  Perhaps the biggest oddity here is the game's localisation and its insistence on transplanting the game and its characters to America - yes, this is a US town which features a Japanese style-shrine and houses for some inexplicable reason, while a formerly Canadian character now becomes Swedish.  It isn't a show-stopper, but it does occasionally feel a little odd if you dare think about it too hard.

There's a fair amount of dialogue to enjoy within the game as you progress through, complete with some outright funny moments which crop up from time to time - however, if you're religious about engaging in chatter with all of the characters on a regular basis you'll soon start to find rather a lot of repetition in their daily banter.  Each character's main "story arc" is, of course, less of an issue in this regard, but the problem here is rather more substantial - you never genuinely feel close to any of the characters or their situations as you seek to cement your relationship with them, and you're always left feeling like a bystander in their problems or thoughts rather than Miley having much active engagement in proceedings.  This leaves recruiting members to feel like a rather calculating, "by the numbers" exercise as you go through the motions in getting them to sign up, then leaving them out in the cold while you chase after the next potential name on your sign-up sheet.  To some degree this is an inherent problem with the game's premise and setup, but some stronger characters and stories for them to relate would have made trying to befriend all six individuals far more of a labour of love.

With an average first play-through lasting anything up to a couple of hours, and the promise of subsequent play-throughs with any legwork you've done in terms of levelling up your conversational repertoire intact to aid you in getting a perfect ending, there is at least some longevity for perfectionists - you may well get five or six hours of gameplay for your £6 or so, which isn't bad value for money in my book.  If only playing the game was actually a little more entertaining as a whole, rather than threatening to become a grind fest as you race about levelling up your abilities and relationships with only occasional flashes of amusing or enjoyable dialogue between characters.

Despite this, we have to confess that it's great to see more and more Japanese doujin games making it to English speakers, and unless you're allergic to the Americanisation of such localisations this is an undeniably proficient effort that won't break the bank if you want to give it a try.  Just don't expect it to tug at your heart-strings or throw you into existential turmoil - this is a pretty bog-standard take on the dating sim genre for the most part, and quoting Bad Dudes vs. DragonNinja doesn't do enough to change that.

6
A proficient, if americanised, translation of a title which only occasionally manages to break out and have fun with its concept and characters.
LATEST REVIEWS