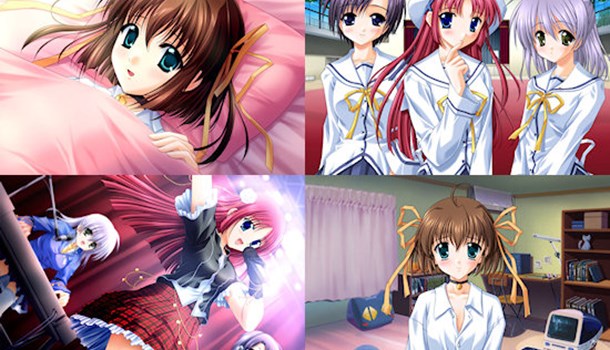 While the original game gave you a few girls to set your sights upon as the visual novel progresses, Innocent Finale tightens its focus to just two of those characters - classmate Kotori Shirakawa and your doting sister Nemu Asakura.  Thus, Innocent Finale begins by filling in its story using what is effectively a slightly altered version of Kotori's arc from the original game, kicking off with Kotori as a wannabe pop idol as she performs alongside her friends while you, as Junichi Asakura, act as the group's makeshift manager.  Such cheerful frivolity is in short supply however; your own interest in the concert is cut short as an announcement from Kotori pertaining to you is interrupted by the collapse of the perennially sickly Nemu.

Things take a rather dark turn from this point forth as your life becomes consumed by caring for your ever-more demanding sister as her condition fluctuates and ultimately worsens, while even your relationship with Kotori becomes strained thanks to a mixture of her own personal issues and your distress surrounding your sister.  But which of the pair should you prioritise, and can you turn things around towards a happy ending for yourself and those around you?  Well, that's the whole point of playing the game, isn't it...

While Da Capo itself was a visual novel with some great character designs and mostly gorgeous visuals, we felt a little let down by its overall plot - an issue thankfully solved to a large extent in Innocent Finale.  Thanks to a combination of its tightened focus and a shrinking reliance upon any magical elements, there's a lot more drama and emotional resonance throughout the game, with some genuinely powerful scenes scattered throughout it.  This is carried along nicely once again by the visual novel's artwork - while quite a bit of it is reused from the original game as you might expect, it still makes for an aesthetically pleasing affair overall.

The one downside of that tighter focus on effectively a single story with a few branches within it is that it gives you less control over the game as it progresses - there's only really three possible endings you can shoot for, and even the introduction of some variety via the opportunity to choose where you spend your lunch breaks and evenings after school only kicks in for a very brief period compared to the wider time frame its put to use in Da Capo itself.  Then again, the game does reward the dedicated player by offering up some bonus, unlockable scenes when you clear certain conditions, so for the completists out there you can be rest assured that you won't finish the game in its entirety all that quickly.

Indeed, the game in general can't be described as short despite its relatively limited player input - this does mean the story drags at times as Junichi's depression is hammered home to the viewer, but this feeling of the game being "padded out" never lasts for long as things soon get back on track, nor does it overly interfere with the "heart" of the game at its core.

Innocent Finale won't immediately grab fans of Sakura or any of the other girls that get short shrift in this spin-off visual novel, and it isn't really one for those with a penchant for Nemu either for that matter - that aside, and assuming you don't hate Kotori with a passion (does anyone?), this title feels far stronger in terms of story-telling than its predecessor thanks to its dark and even occasionally disturbing outlook, and becomes all the more engrossing and emotionally engaging because of it.  Add in the lack of sex scenes and erotic content, and you have a game that isn't quite friendly to all ages, but nonetheless one that is a good example of the visual novel as a source of dark human drama offset with a slice of simple humour.

Da Capo: Innocent Finale is available to purchase as a digital download from MangaGamer

7
It doesn't offer the same amount of user interaction as its predecessor, but Innocent Finale succeeds via a far superior and darkly dramatic storyline.
LATEST REVIEWS