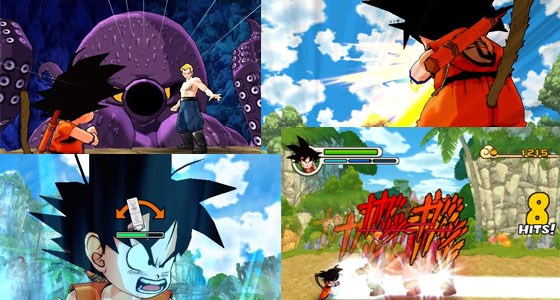 There are times when we want to experience the past again, be it that game we loved when we first played it back on a 16-bit console or that series that we used to wake up for extra early in the morning just to get the latest episode. Dragon Ball: Revenge of King Piccolo tries to tap into both these senses of nostalgia, but does it bring back fond memories?

The basic plot for Revenge of King Piccolo (and I do mean basic) follows the story arcs of the original Dragon Ball’s Red Ribbon Army and the King Piccolo saga, as Goku tires to find the Dragon Balls. To say the basic plot is abridged would be a slight understatement. While the very basics of the plot are there, any detail is done through a stage round-up, followed by a still portrait with some voiceovers interlaced at times with an animated cut scene when something more epic happens. If you know anything about Dragon Ball, you will more than likely know the story already, but it would have been nice to see a bit more of the animated cut scenes.

While the nostalgia of the anime is lost a little, the summoning of the gaming ghost is truly there for all to see, and it comes in the form of Streets of Rage. Dragon Ball is pretty much a straight brawler, having Goku face different enemies from one end of the level to the other with the only goal being to defeat everyone and navigate the level. For fans of both Dragon Ball and fighting games of the time, it can only be a match made in heaven. While the controls are somewhat simplistic, it does make them easy to grasp and get the most out of the game. The only issue here is that there is no real scope to evolve the general move set once all the controls have been learnt after the second world, so things can get quite repetitive after a while. One recommendation is to play the game with either a Classic Controller or a Gamecube controller. While you can play with a Wii Remote and Nunchuk it makes things much easier to go back to the old-school controllers, especially with a game that is based upon older game mechanics.

On the plus side, the visuals are 100% faithful to the original Akira Toriyama artwork using the well known technique of cel-shading, giving the characters and the world a very manga style look. Goku himself looks great particularly, though more in the animated cut-scenes than anything. The game’s presentation just seems to drip Dragon Ball everywhere and you can feel that the games makers had at least a bit of fun while creating the artwork for this game. For the purists who demand everything to be in Japanese, you can switch all the voices in the game to the original Japanese cast, which in some cases for the English dialogue is a very good thing.

As well as the main adventure mode, you also have the World Tournament. Here you and a friend can pick your favourite Dragon Ball character and duke it out, 1v1 style. While the fighting mechanics work in single-player with many different enemies, as a 1v1 mode it becomes a matter of who can put in the most hits and who can defend the most. There doesn’t seem to be much of a strategic element to it at all, which seems like a wasted opportunity.

There is also a shop on offer that gives up plenty of extras and additions for the right money. While you can buy items for the main adventure mode there isn’t much here apart from curiosities that, while great to unlock, don’t really add much more to the game. Only the true completists will want to unlock everything and even then their patience will be wearing thin towards the end.

Revenge of King Piccolo is a fun game that should be played in small bursts - Hell, the game itself recommends this by splitting up levels into 10 minute chucks with a handful of levels per stage going through the saga. It won’t give you the full Dragon Ball story, but it is more than enough to get the gist and if you really want to know the story, then the manga is pretty easy to find. It can be basic at times and very repetitive, but you’ll be hard pressed not to gain any enjoyment out of it if played in quick bursts. It’s a nice hanker back to an older style of gameplay which just fits the story down to a tee.

7
An interesting exercise in merging nostalgia, which for the most part works
LATEST REVIEWS