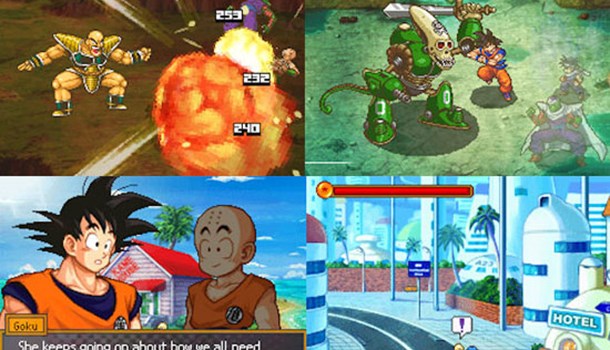 RPGs are a dime a dozen nowadays, with every company having a story to tell or a franchise that needs a story to be told in game form. This is where the latest Dragon Ball RPG for a handheld appears, telling the early sections of the Dragon Ball Z story with spirits and levelling up.

What Attack of the Saiyans is all about is bringing the usual RPG elements to the original Dragon Ball Z story. It seems to begin before the main Dragon Ball series, following some of the other characters before going headlong into the story. Fighters train, aliens come down to Earth and everyone gets into a huge fight. It’s Dragon Ball Z all over again.

So what does this do different to all the other RPGs out there? Well... nothing. The game is what some would call a homage to the older RPGs of the SNES era, with Chrono Trigger being a more recent example - ironically, a game that uses character designs from the man who created Dragon Ball in the first place. Anyway, everything about the game screams 16-bit. All the action is contained to the top screen, everything is done using sprites and 2D artwork and all set-pieces are done with little animations using the game graphics, emoticons above the characters heads and then 2D portraits of each character as they dish out plot points. It’s not exactly new, but then if you love this style of RPG you’ll be right at home. In fact the game looks like it was a GBA project put on the backburner - the evidence for this is even more apparent with the lack of DS functionality within the game, with the touch-screen only ever being used to either skip conversations or look at stats and other items and nothing else.

Gameplay is very old-school as well, with characters going through “dungeons” after going through a hub city to stock up on items, revealing some story and then heading off for random encounters and then a boss. If there is one thing that this game does love, it’s random encounters. You can even buy an item that gives you more, because one every three steps just doesn’t seem to be enough. With the actual battle gameplay itself, it sticks to the tried and tested turn-based method that we’ve all known for years. Everyone takes a turn at either hitting, healing or something else and then the enemy does the same. You can decrease the amount of damage taken by timing button presses, but it is basically who has the biggest attack or what skills to use when and where. During battle you can also raise a gauge from dealing or taking hits that then has your character power up. If two characters are in this state and do the correct combination of attacks, then you can go DBZ on the enemy’s arse which usual involves an animation of throwing them into a mountain, loads of punches and high-level attacks and massive damage.

To be honest, if you’re a fan of old-school RPGs, then this will be right up your street. It doesn’t do anything particularly new, but it is entertaining in its own right and if you’ve finished that copy of Mario & Luigi, this’ll tide you over until the new Zelda. However if you are a fan of DBZ, then there is little here apart from an abriged version of the early sagas in the story. There is fun to be had out of the game (ten hours over a couple of days proves this easily) but it just might not be everyone’s cup of tea.

6
An interesting look back at older style RPGs, but may not be for everyone
LATEST REVIEWS