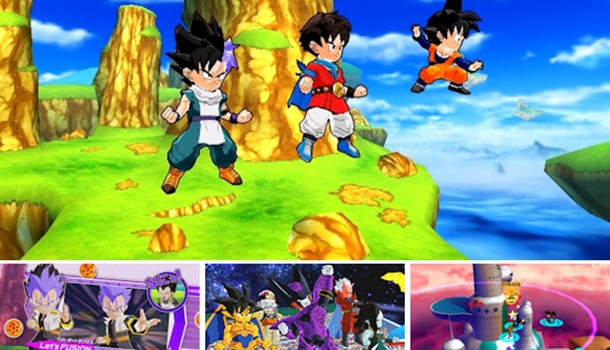 If there's one anime universe that's ripe for an in-depth RPG, it's Akira Toriyama's evergreen Dragon Ball series. With multiple generations, timelines and factions, it has the catalogue for content that's rich for mining. Dragon Ball Fusions takes in everything DB and revels in it.

The game is exclusive to 3DS, and with this platform comes some limitations. Characters are represented in chibi (childlike) form, and most likely due to limitations of the cart format, your foray into creating your own character at the start of the game, with 5 races to choose from, is a bit limited. Still, it's an easy process and allows for some ownership of your in-game avatar. These are minor quibbles though, and don't get in the way of your enjoyment.

The colourful charm of the characters shines through, leading to a game that combines strategy RPG mechanics with a flight-based exploration twist which works surprisingly well. Press R to take flight and you can explore the world, discovering new Dragon Ball characters as you go. Environments are nicely rendered, and there's something rather relaxing about tearing around the sky. If this isn't your thing, there's a warp function that will take you to places you've already visited to save some time, so gameplay is quite snappy once you've been around the map a bit.

Your adventuring is a mix of discovery, talking to various characters and, this being Dragon Ball after all, lots of fighting. Unlike more action-oriented DB games, Fusions takes a classic turn-based RPG approach during fights, with a timer to determine who throws down and when. This element does leave a little too much to chance, as the defending character chooses a direction to block while the attacker picks one of eight surrounding slots, with damage being limited to how close the defender guesses the attacking direction. Thankfully some of the attacks negate this haphazard approach to reduce frustration.

Where the game really shines is in the titular fusion mechanic. Dragon Ball fans will be familiar with the concept of fusing two characters together, but the sheer variety on offer in this game is a thing of beauty. As you explore, you'll collect more characters and so increase your options, keeping the hunting element addictive and rewarding. It's a really clever concept that suits the series perfectly.

The usual RPG rules apply too - your characters will level up with experience or new skills, which can be evenly distributed among your party. Between the fusions and the skills, your options are virtually unlimited.

Dragon Ball Fusions is very much as stated - a fusion of strategy RPG and Pokemon, it shows a genuine love for the world created by Toriyama, and fans of the series should find a great deal to love about the game. My knowledge of the series is pretty limited, but even so I found much to enjoy here.

The title seems to have sold well at launch, with many major online retailers already out of stock. If you can't find a physical copy, the Nintendo online store has your back.

8
Not just for the hardcore fans, this is a joyful foray into the Dragon Ball world with plenty to offer everyone.