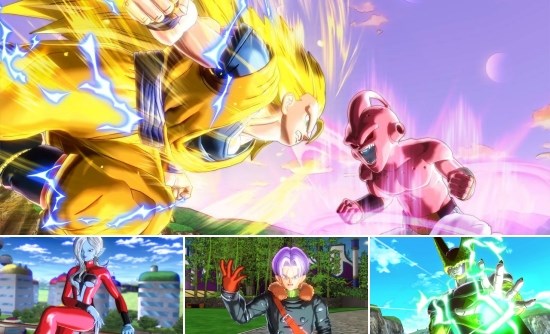 Ah, Dragonball. One of the most evergreen of franchises and capable of shifting units wherever orange jumpsuits and spikey hair are featured, much like a certain ninja series in fact. And just like Naruto, Dragonball launches new fighting games every year, with a lick of fresh paint and new mechanics.

But this one is a bit different.

Events throughout Dragonball history are being altered by a pair of thieves who harvest the energy of warriors, but in doing so have changed the past. Trunks and his Time Patrol can set the world to rights, but to do so, they'll need a new ally - you!

XenoVerse requires the player to create their own character, which in itself is a great prospect. Call me picky, but the oddball cast of Dragonball haven't always appealed, so the ability to create my own avatar was very welcome. Most of the available options seem to be taken from existing characters, but the ability to mix and match leads to some lovely results - in total you'll unlock over 200 skills and 400 pieces of equipment, so there's a mountain to climb before you can claim to be the ultimate fighter. But right from the start XenoVerse welcomes you into its world and allows you to stamp a bit of yourself onto it, which is a fantastic update.

You'll base your efforts in the hub world of Toki Toki, where you can interact with NPC's, go shopping or even challenge other random players to fights. At present Toki Toki is rather barren, and is in need of a community. In time, this could flourish, but for now there's not much fun to be had in the flat management environment that you can't even fly through to speed things up.

No, I'm afraid if you want to have fun with this game, you're going to have to fight something!

There are 12 master quests and 55 parallel quests to work your way through, and once you've Quantum Leaped your way to the appropriate battlefield you're able to get involved in some excellent fighting action. Like Budokai, you'll be brawling in a 3D battleground and using a combination of shoulder button and face button combos, almost all of which can be chained to create a fluid and often gorgeous series of bouts.

The only let-down here is the terrible companion AI, which is often worse than useless. The amount of times I was attacked by multiple opponents while my support just sat and watched was ridiculous, and after a while I started to think that they really didn't like me and only came along because they had to. In a game that strives to make you feel involved, it's an odd choice to have the mechanics ostracise the player on the battlefield.

However, with the ability to train under existing characters and power up your character, you won't need friends for long, and the overall experience of integrating yourself into the DB universe is a positive one. It helps that the graphics are, on the whole, beautiful. Crisp, clean and detailed, the real power of the PS4 shines through here. The battles in particular are incredibly fluid, which only goes to show up the hub levels, as they lack much of interest and drag the overall experience down - this should be less noticeable if the online community picks up, but for now it's almost like a cut-and-shut of two genres with an unsightly seam keeping them together.

Speaking of ugly, the dub is probably the weakest area of the game. Prepare to grit your teeth and suffer it, or just switch to subtitles and turn the voices down. The latter is probably going to be the route for most players I imagine.

So is XenoVerse for you? Well, it's certainly a capable fighting game with a solid storyline, interesting ideas and plenty of options to fiddle with. It's a rich and generous game when it comes to creating your own deadly fighter, but the dull hubworld and terrible AI give it a bit of an unsightly set of love-handles.

Namco Bandai could be on to something here - the idea of interacting with the best of all-time Dragonball fights with your own character is a delicious recipe, but it needs refining. We're just at the start of the  PS4/XBONE era, so I'm sure we can look forward to an update, but for now this is a colourful, varied game with some real stand-out moments and a great amount of energy.

7
A game very much of two halves, with one significantly better than the other.