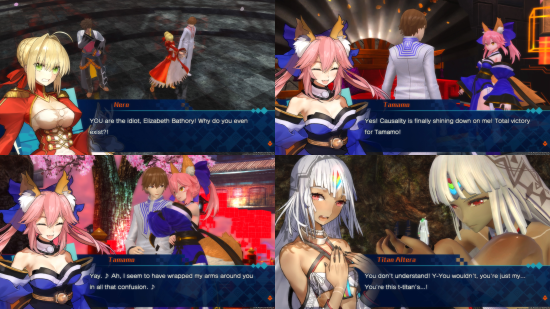 I need to confess. This, is my first Fate game. And by that, I mean that this is the first fate game, other than the original Fate Stay Night visual novel on the PC that I have played to completion. I have owned many of the games, but, like most people my age, I just lack time and inclination to devote time to them. Especially when the Fate world is so, wide.

Fate Extrella is the most recent game, other than the smartphone game, to have the “Fate” name and while it was released back in January, on the PS4 and Vita, it has unfortunately taken me the best part of a year to finally give this game the attention it deserves.

One of the games I wish I had played more of was Fate Extra and Fate Extra CCC, which were released in the western world on PSP. These games are the prequel for Fate Extrella and, although this new game does reference those stories in the previous game, I have found that not knowing all the gritty detail about what happened during the fight for control of the Moon Cell isn’t really necessary as it all gets re-iterated in the dialogue anyway! (As it happens, it seems that 2018 will grace us a new Fate Extra anime, which will hopefully mean that we can relive the events of the PSP game.)

Now, Fate Extella is a very different kind of game from pretty much everything else in the franchise. It is best described as a third person strategic fighting game very similar in style to Dynasty Warriors 8 in terms of its fighting arenas and the sheer numbers of enemies and boss battles. However Fate Extella is quite different in terms of the strategic elements whereby you have interconnected arenas which you must battle the hordes of enemies and enemy servants, to capture and I want to focus a bit more on the gameplay, before I dive into the beauty that is this game’s myriad of storylines… and Tamamo no Mae.

I am a big fan of strategic style RPGs and it’s been a bloody long time since I have played something as, challenging and enjoyable as the arenas within Fate Extrella. Each arena is split into a series of zones with each zone being worth a certain score. You have to capture each zone through defeating hoardes of enemies and their controlling aggressors. Once each zone is clear, then you gain control of it and gain that score. At the same time, the AI is trying to defeat your defence and attack your zones. Each zone may have a servant allocated to it to hold off the attackers and you find yourself jumping between zones, fighting fires, destroying all in your path and boy, its fun. Given my job requires me to find ways to vent my stress, I have found that mashing my way through some of the arenas in Battle Mode, with some foxy servants of my choice to be incredibly cathartic. The game is quite subtle in making you think about offence, defence and your prioritisation of targets and so far, each arena is unique and I found it to take more than a “dive-right-in-and-kick-the-shit-out-of-everything” mindset. It requires strategy and I love this.

However, the battle engine is only one half of the game. As with the rest of the Fate series, the story is the main attraction. Fate Extrella is split into four story arcs following your progression through the defence of the Moon Cell and your realm within the digital world of Seraph.

All this conflict has come about from an initial experience where by you, the main character, has been split into three following a shock meeting with the white titan, trapped inside the Dark Zero zone within the Moon cell. The white titan, is the vanguard of the Umbral Star, a consumer and destroyer of worlds and civilisation and during her last release, 14,000 years previously, she wiped the face of the Earth clean. And when you met her, the only way you were able to escape was to split yourself into three. Landing you in the midst of the current debarcle.

You first start the game with your precious servant, Nero Claudius, or as she (yes, she) is commonly known, Red Saber. Nero is a firey, lusty and very lively individual, as expected from the greedy Roman despot and you help her, using the power of the Moon Regalia (or, 1/3 of the power) to help fight back the encroaching attack programmes following the corruption of the Moon Cell, and the forces of the competition for the crown, namely Tamamo no Mae.

Due to each of the servants having a “piece” of you, and a piece of the regalia, they are fighting between them to gain the powers of the other and with it, supremacy. The third piece, yes, that is held by someone very interesting indeed. I will say this though, I think one of the writers might be a macrophile…

As with the other Fate games it becomes increasingly difficult, as you dive into the stories and characters, to decide who you like best. This is a discussion I have found myself having many times during the course of the game. Nero, whose power, lust and charisma are simply unparalleled, has her own attraction. Tamamo no Mae, with the radiance of the sun, a foxy personality and her haughty taughty personality and incredible looks. There is then Altera, whose purity and savagery, mixed in with a side of shyness, makes her also one of the many stars. The side characters are also not to be ignored. While Archimedes is a complete wanker, Elizabeth Bathemory is simply hilarious and adds some much needed comic relief an entertainment to the story.

Personally, its Tamamo all the way, though Altera isn’t without her charms. I tended to find Nero a bit hard work at times, though perhaps that’s just me and my bias for animal-ears.

Fate Extella has been a surprise for me. I expected a highly repetitive game with some story tacked onto the site. What I got instead was a game which offered a lot of varying strategy, and a story which is so deep that 40 hours and the four main stories complete, in I am still finding new facets to explore. I have greatly enjoyed playing this game, and I honestly hope that this format, or at least something similar, comes out in the future with new characters.