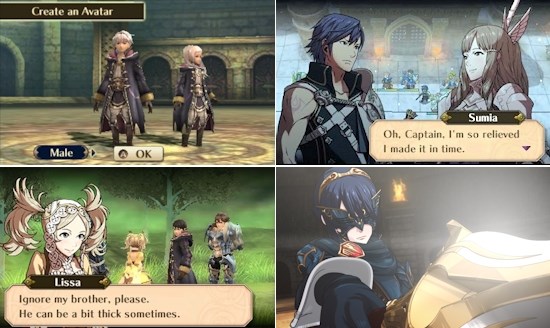 Fire Emblem, the unsung hero of Nintendo SRPG's, makes a 3D début. And what a début it is; everything from top to tail is absolutely stunning, so lets take a closer look.

When you start, you're offered a first for the series, the ability to customise your character. Hair, colours, face and voice and gender can be tweaked to your liking, and once done your character will be available for other to download as a general - this is a lovely bit of customisation and is indicative of the level of care this title has enjoyed.

The game's presentation is lovely - menus are intuitive and easy to understand, with excellent explanations for everything in-game - there were times when a manual would have been a bonus, but it's possible to get by without it (not something I can always say for Vita games, which makes their abolition in hard copy puzzling). But I digress, you'll have no problem getting into Fire Emblem.

One of the early decisions you're asked to make is an odd concession from such a typically hardcore game; typically if a unit is killed in Fire Emblem, they stay dead. This forces you to think very hard about tactical placement of units and forms the backbone of what gives the game its edge. So imagine my surprise when I was given the option to switch this off - when enabled, units retreat from the battlefield and are in perfect health for the next battle. This can be a tad confusing when dead characters start popping up in cut scenes, but it's nice to see that the soft-hearted amongst us (including me) are catered for.

Once the initial setup is out of the way, prepare to lose a lot of time. The story, expertly crafted and beautifully localised, is utterly engaging. If the superb game mechanics (we'll get to these) weren't enough to create an addiction, the story certainly will. It's typical swords and sorcery fare, but deftly told and compelling as hell. It's a story you can fall in love with, and that's important, because this game will severely test you. Essentially, after an early climatic battle, your character is relocated "elsewhere" and wakes to find Chrom, a Prince and commander of a group of "Shepherds" charged with protecting the kingdom. Events move forward at a frantic pace from hereon out, and there's a bevvy of great characters to discover.

At its heart, this is a strategy RPG, and one that has the benefit of years of tweaks behind it. Each battle is a straight-forward grid-based affair, with easy access to everything you require. Your units, amongst which you can count lancers, swordsmen, healers, magic users and horse-riding types (the usual menagerie) recieve a boost when placed next to certain other units on the battlefield. Beyond this strategic placement, you can also pair units for stronger attacks.

Between battles, you'll forge bonds between your units to increase their effectiveness through conversations, so not only must you juggle unit types, but also partnerships. It lends a dazling array of possibilities to the game, and much to manage. But through the sheer amount of energy, charm and enthusiasm of the characters, you'll love every minute of it.

You'll travel via a world map, which guides you to the next stage of the story, as well as branching off to show side-quests. Visited locations become shops, and you'll be needing a lot of currency to replenish your stocks.

The 3DS finally has a game to rival Disgaea 3 and, almost, Persona 4 on Vita. It has bags of charm, a gripping storyline and beautiful presentation. If you own a 3DS, you need this game. If you don't, go buy the Fire Emblem special edition 3DS and kill 2 birds with one stone.

10
A killer app for the 3DS, near perfect in every way, it should be in every gamers collection.