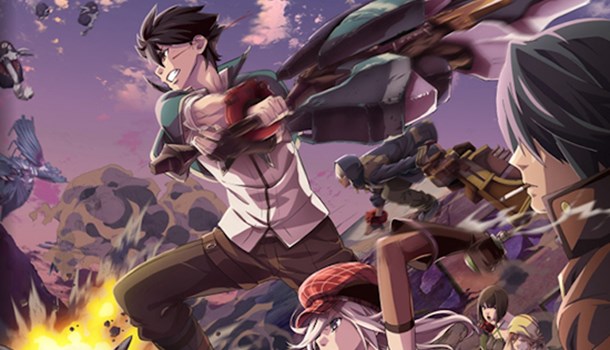 Set in a post-apocalyptic wasteland overrun by bizarre monsters, you take your place as the newest warrior of Fenrir, the last organisation left fighting the Aragami monsters. Taking to the desolate wasteland with your colleagues, you must protect the remnants of humanity by destroying encroaching beasts and powering up your weapons, skills and equipment.

It's another Japanese adventure time-sink then!

Namco Bandai should be a familiar name to any anime fan, given that they produce some excellent Naruto games. They're also responsible for 2 of my all time favourite games, Gundam vs Gundam and Macross Ace/Ultimate Frontier, though sadly those are Japan only (but still very playable even if you don't speak the language!). It's a genuine pleasure to see one of their titles make it across to Europe intact.

Anyone who has played Phantasy Star Portable will know exactly what to expect with Gods Eater Burst - you must first create your character through a simple selection process (gender, face, hair, voice and outfit), and then get settled in for the initial exposition.

Character creation is simple enough, though unlike the aforementioned Phantasy Star, there's only one race on offer here as opposed to four. Despite the temptation to pick a female avatar (because they always get the best clothes) I created myself a dapper chap with a voice that was mature enough to represent my advanced age, and initially equipped him with a God Arc sporting a medium range blade. Just creating and arming my character was a blast.

This brings me neatly onto the weaponry, the game's signature feature. You use a God Arc, which is a combination of sword, shield and gun. And it's massive. All three areas can be upgraded as the game progresses, for which you need to find as many artifacts as you can - these are scattered throughout the battlefield and taken from fallen enemies. This can become seriously addictive.

Elements also play an important role, generally fitting into electrical (spark), fire and ice - the creatures in the game have weaknesses to some of these, and you'll need to learn which in order to lead a successful hunt.
You also need to take into account whether to use penetrative weaponry or something bigger with which to bludgeon your opponent to death. By taking advantage of these options you can become an effective sniper, soldier or brawler, and many things in between. It's a totally open field and very satisfying to boot.

One of the major assets of this game is the open-areas you get to fight in. I never liked the "room-by-room" approach of Phantasy Star, which basically saw you running around small areas fighting repetetive enemies. The open-areas used in God Eater make for many subtle dangers - flying enemies can and will alert other monsters in the field to your presence, so an element of stealth can at times be necessary. Equally, with the wide spaces on offer, you can organise your team and employ strategic measures to gain victory.

The storyline is also quite intriguing, with plenty of mystery even from the early stages - its clear that something quite clandestine is going down at Fenrir corporation, and repeated visits to the various areas of the Den (your base of operations) pays dividends. Here's a tip; if you get back from a mission and the placement of the characters loitering at the base has altered, you need to take a look around.

So far so good, but the game does have some niggles; The chief issue for me was the fiddly control scheme. It took me a while to get used to it, and even then there were times when valid commands didn't produce the desired results. In particular my God Arc refused to change form in early missions, which then had me question both what I was doing and the instructions. Thankfully that issue sorted itself out and subsequently it's fairly smooth.

The lack of a dual analogue also causes issues. The beasts in the game can move very fast, and if you're using a gun there's no lock-on, which means running around aimlessly trying to get the camera into position. It's a minor niggle, but it can be frustrating in the heat of battle. Interestingly Metal Gear Solid: Peace Walker was able to take a similar format and create a control scheme that worked very well, using the buttons as a second analogue - sadly the nature of the 3 weapon system in God Eater makes such a a system impossible. A shame that the game's biggest asset is also the cause of the biggest headache.

The music, while lively, can get repetetive, especially in the Den. I recommend turning the music down in the control panel if you don't want a headache.

However, these shortfalls are more than made up for by the strength of the overall experience. The monster designs are fantastic, with just the right amount of bizarre freakery you'd expect. The anime cut-scenes are beautiful, and the in-game graphics, while not Peace Walker or God of War breathtaking, are solid and attractive. The imagination shown on the battlefields is also excellent.

We're also blessed with the enhanced version of the game in Europe too - not for us the vanilla release that Japan first got hold of in 2009. The Burst edition features;

Phew! So with that little lot, we really are getting spoiled. DLC should be on the way too.

The PSP is often overlooked by European press, and Gods Eater Burst is just one of many examples of why that's simply wrong. The game has depth and polish that even home console games often lack, and if you want something to lose yourself in, you could do far worse than enter the world of God Eater and save humanity!

Oh, but please Bandai/Namco, don't make the next installment a GAME exclusive, some of us like to shop elsewhere...

8
Deep, polished and entertaining. A few flaws aside, this is an excellent addition to the platform.