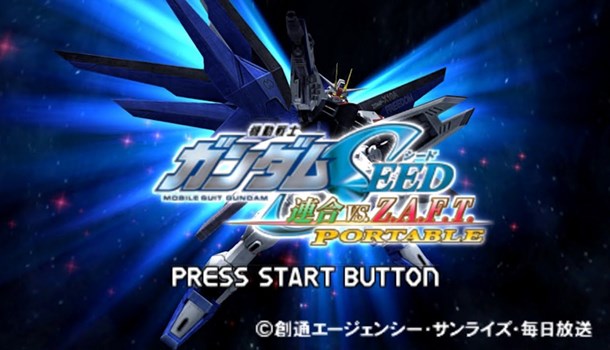 Gundam SEED is a great series, and part of what makes it so great is the mecha – lovely big Gundams zipping around raining hell on each other – and now we can take part too, with Bandai Namco’s arcade port to Sony’s lovely hand held system.

The game features 3 styles of play. The most immediate is the Arcade mode, where a selection of 50 units is available covering Gundam SEED through to the early Destiny designs. Once you’ve picked your mech, you’ll have to choose a pilot. Whilst this makes no discernable difference to the mech you’ve picked, it will alter the missions you’re given, of which there are 10. Missions range from protecting motherships or fellow team-mates through to all out assault, but the basic gameplay is the same – kill everything. Occasionally tactics may change – there are times when trying to kill everything that moves will leave you vulnerable, when a carefully orchestrated attack against the main target would be more sensible, but as you’re graded by your body count, you’ll have to find a balance.

The mechs handle beautifully – you’ll find yourself moving by boosting for the most part – a quick double tap in the direction you want to go will see you dart around, but you can enter prolonged flight by using the X button. The Triangle button handles the beam sabre, Square is your main gun, Circle switches targets and the shoulder buttons handle secondary fire (right) and special attack (left). Press both together when your SEED bar maxes out and you’ll go into hyper mode which gives you unlimited energy weaponry and a speed boost. Finally, some mechs, such as the Freedom Gundam, allow you to hold down fire for a charged attack, and some button combinations unleash yet more hell. It’s all very intuitive and you’ll be flying like a pro in no time, despite the Japanese text and narrative.

A new addition added from its PS2 counterpart is a mission mode. This introduces a career path, allowing you to start as either Omni or ZAFT, and allowing you to earn better mechs along the way. With over 100 missions, you’ll be playing this for quite some time, and again the Japanese text doesn’t stop you enjoying this mode of play.

One interesting touch to this extra mode of play is that any damage taken to your mech is carried over to the next sortie – since you can keep up to four mechs in your arsenal at a time, this becomes important – you may need to play with an unsuitable mech to allow your preferred unit time to repair, which can get irritating when you start flying harder missions. Still, it doesn’t detract from the gameplay.

Finally, you can link up to four players to go head to head. Sadly I don’t know anyone else with the game, and navigating a Japanese setup is going to be tricky, but I imagine its bags of fun.

The music littered throughout the game is taken directly from SEED, which makes for an awesome soundtrack. Graphics are fluid and the mechs are all well realised, whilst the backgrounds get repetitive, but they’re hardly important. Major locations from the anime are here, including Orb, Junius 7 and the Desert area (populated by annoying ZAKU units…)

With a huge number of mechs, an innovative career mode and superb presentation, Gundam SEED: Rengou vs ZAFT Portable is one of the best games a Gundam fan could hope to own. Given that the PSP is multi-region for its games, you don’t need to worry about compatibility issues, and this game stands as one of the best reasons to own the console, and I recommend it wholeheartedly.

If you’re lucky enough to own a PS2, the sequel to this game, Omni vs ZAFT II P.L.U.S is now available, with an even larger array of mechs available!

10
Superb arcade action, and possibly the best PSP game yet.