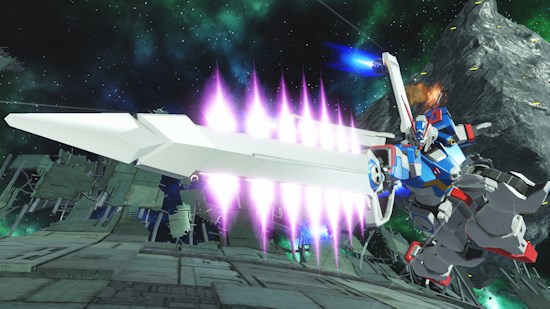 Gundam Vs is a much-loved series on this site. Over the years I've played the game on everything from Akihabara full immersion arcades to handhelds and full consoles. This arena-based series pits two Gundams against a series of opponents in different and exciting stages, with immense boss battles breaking up the action.

Gundam has a rich history of music, characters and mecha, and all of that is thrown into these games. The most exciting element of each new release is whether or not your favourite Gundam will be in the mix, and which new suits and pilots will be represented this time.

Gundam Vs on the PS4 has taken quite some time to arrive, but (spoilers) it's been worth the wait. Everything has been re-tuned for this edition and even veterans like myself have much to learn before taking on the fandom at large.

So, what's changed? Well, for one thing there are more modes this time around. My favourite is the Ultimate Battle Mode, which takes you through 30 stages, broken up by point stages (defeat a near endless wave of mechs for example) and boss fights. With the extra power available on the PS4, everything is large, solid and well-rendered. Even the arenas themselves, often the weakest element of the games graphically, are detailed enough to provide some interest beyond just barely skinned blocks to be destroyed, adding to the immersion.

The element I thought I'd find most irritating I ended up being quite fond of - little Haro, the ball-like mech mascot of the series, squawks warnings and encouragement while you're engaged in battle, and while this sounds horrendous, is actually quite fun. I'll probably be in the minority, but Haro is alright with me.

The main mech I tried out on my first Ultimate run-through was the Freedom Gundam (SEED was my first Gundam series) and at first I was thrown by the new controls. All the attacks I'm used to are still there, but accessed differently. This lead to some frantic button mashing as I tried to figure out how the hell to fire my full-on beam assault, but once I'd got the hang of it I was able to gracefully fly around the battlefield bringing the smack on gilded wings. Lovely!

The other offline game mode is Trial Mode - this is essentially an arcade run-through, and is the Gundam Vs I'm more used to.

Almost every generation of Gundam is represented here, and the non-DLC roster is beastly at over 100 units. Even the latest series, Thunderbolt, gets some mechs in here, and you'll be hard pushed to find a suit that isn't to your liking.

This game is meant to be enjoyed online, and subsequently you have the annoying task of scrolling through the legal terms before you can play. Oddly you're then dropped into an arena and forced to start playing - I couldn't find any way to skip and subsequently played for 20 minutes before I died and the main menu popped up. This is a very weird way to start any game and I really didn't care for it.

Online is both a strength and a weakness, as at the moment it isn't that stable, but the potential is huge. Having played on an arcade cabinet, I can comprehensively say that there's really nothing to beat that human vs human gameplay. There are 3 online modes, Casual, Ranked (for more hardcore players) and Player sessions, with the latter being one for you and friends to freely play together.

There's also a 9Gb patch that has to be downloaded before you can play online. That's a bloody horrendous size for a game on launch day and is completely inexcusable in my opinion. Once you've got the patch it's not exactly smooth online anyway, so I recommend solo play for a while until they sort it out.

Niggles aside, this is a fast paced arcade experience almost unique to Gundam. It's more tactical than the Musou games and the variety on offer will keep your interest, even if it is clear that units share similar attacks with different animations.

As a huge fan of this genre, I can happily recommend this - it isn't deep, but it's beautifully put together, exciting and has enough going on to keep you entertained for some time. I suggest you strap on your finest space-suit and launch!

9
Great for Gundam fans, and a fine introduction for anyone new to the series. This is as pure an arcade game as you're likely to find outside the beat-em-up genre