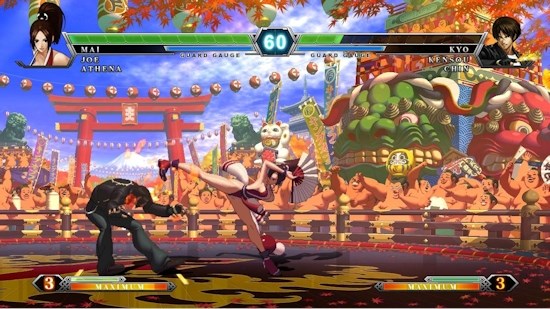 Don't you just love it when a company listens to customer feedback? When SNK's King of Fighters made its debut on next-gen consoles, it was anything but. Lightweight on options, a weak technical combat system and visuals that lacked the sharpness of Blazblue or the beefy grunt of Street Fighter, it was widely shunned. Something of a shock from one of the industries greatest fighting game companies.

After what we can only assume was a year locked away with the Rocky soundtrack, I'm happy to report that I have no such complaints with XIII.

Firstly, the game seems to have been lavished with some real love this time around. Rising Star have packaged the game with a plethora of extras which include a 4 CD soundtrack, poster (with moves list on reverse), a CD containing some excellent artwork - rough sketches, wallpapers, telephone card artwork (these are rife in Japan) and a reversible cover. You certainly get your money's worth in extras, and for under £40 it's a total bargain.

The game itself has also recieved a considerable upgrade. There are now a multitude of play options;

Tutorial mode has you trained by tournament founder Rose Bernstein in the basic rules of engagement. It's actually quite fun, and there's nothing quite like being bossed around by a cute blond in a sexy red dress.

The basic arcade mode takes you through a series of matches until you get to the final boss, but even here there have been some nice touches - the banter between teh characters has been well translated and is genuinely funny to boot - Mai's reaction to having her traditional fighting outfit described as "rags" had me chuckling to myself - given the series' long history the friendly (and not-so-friendly) chat before matches really helps to give the game some personality.

Story mode finishes the Ash story arc for those that care, for others it may just be a bit confusing, but anyone who has followed the Blazblue story should find it a doddle.

The standard Vs and Practice modes are in here too, bringing the total number of play-modes up to a respectable 5.

The character roster has been bumped up too, with 11 new (or old) fighters added to flesh out the cast to 33. Probably the most requested addition is the return of series poster girl Mai, who's omission from the previous game mystified almost everyone.

Further characters have also been promised through DLC "shortly" after the game's release. Iori has already been confirmed for a December 7th release, along with 3 system themes and a means (presumably paid) to instantly unlock some in-game content.

Graphically the game looks much better - with 20 animated stages to battle across (compared to a measly 5 in the previous game) and sprites that retain the pixel-art charm without looking like jagged last-gen imports, it's a smooth looking game that can now seriously be considered "next-gen".

The meat of the game is what will define the success of KOF XIII, and I'm happy to say that SNK have firmly re-planted themselves as a viable "third way". Gone is the controversial (read: universally despised") Critical Counter System, and in its place is a Guard Gauge that allows for some serious guard crushes. The two-tier Drive Gauge allows you to store up super-cancels, and the Super bar now allows you to store up 5 moves, which allows for some furious and technical bouts which should please tournament fighters no end. The inclusion of EX moves expands each fighter's roster of attacks, which means that KOF has a smoother, more logical flow of strategic gameplay which rewards skill while lowering the technical bar to encourage new players. It's very well considered and pays dividends.

SNK are back in the fight. For those of us who love the series, it's like Christmas come early, and for anyone new to the franchise we can now introduce our friends with some pride and finally show them what all the fuss was about!

9
Meaty, sexy and stylish, it's a genuinely lavish return for SNK's finest.