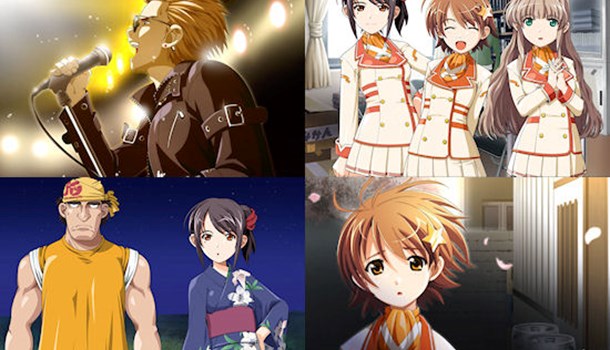 While K-ON! might be the series that made being in a band cool again amongst anime fans (and not to mention profitable for content producers), it's hardly the first animated effort to make good use of throwing together a bunch of school-aged students, giving them instruments and letting them loose on the unsuspecting public.  Away from anime this is also the case, which brings us to Kirakira, Overdrive's 2007 visual novel for the PC more recently made available in English in both its original adult form, as well as in a cut-down "all ages" release from Manga Gamer.

Kirakira flings us into the world of its male protagonist Shikanosuke Maejima, a guy who is hardly enjoying the joys of school life when we first join him, learning of his decision to quit the school's tennis club before finding himself dumped by his girlfriend just before the New Year.  Come the next school year the following spring, Shikanosuke meets a girl named Kirari who starts working at his restaurant - He soon realises that they attend the same school, and before he knows it he's been invited into the midst of the school's "second literature club", a spin-off of the literature club proper which is facing closure at the end of the year.  Finding its sparse membership desperate to send the club out with a bang, Shikanosuke and the three girls who attend the club end up creating a rock band, with what they expect to be a one-off performance spiralling into something altogether more sprawling and life affirming as time progresses.

Needless to say, the adult origins of the title means that the basic set-up of the game always holds an eye towards which of the three lead females you'll end up falling madly in love with (and yes, almost all of the adult scenes involve love and not just mindless sex), and sexual references are scattered perhaps surprisingly sparsely throughout, but despite all of that developers Overdrive have still managed to pack a whole lot of story-telling into Kirakira from beginning to end.  While the early part of the story is a predictable journey from a quartet of musically clueless individuals to a more impressive ensemble, things really kick up a notch after the band's opening performance, taking in additional gigs and touring as well as myriad personal crises and some genuinely dark and depressing plots involving the lead characters.  Of course, some of the less serious storylines are utterly bizarre to the point of being borderline nonsensical, but this only adds to the sense of fun Kirakira manages to retain throughout.

Even where the plot slows and threatens to become dull, Kirakira impresses from the off with its production values, with a wonderful soundtrack that fits the game perfectly despite not being as punk as it might wish it were, and static visuals and illustrations that also look almost uniformly great.  Admittedly, the character designs aren't the most exciting around (and the characters themselves fit into various stereotypes almost too neatly) but that doesn't really detract from the overall quality of the artwork on display and the feeling of polish that the game oozes from beginning to end.

As visual novels go there aren't a great number of different paths to follow, which does limit the replay value somewhat, and the number of decisions you're actually faced with as a player are thus equally limited which certainly pushes the title more towards the "novel" designation it holds.  However, if you aren't looking to squeeze vast amounts of gameplay out of Kirakira then it proves to be a largely fun experience that can occasionally surprise with its emotional impact, topped off with a soundtrack which never becomes boring somehow.  If you've ever watched K-ON and wished it was more edgy or wider-reaching, then Kirakira could offer a great introduction to the world of the Japanese visual novel, especially given its availability in a "clean" version free of sex scenes and nudity if you're put off by such things.

Kirakira is currently available as a digital download from MangaGamer

7
It isn't the most interactive of visual novels, but Kirakira impresses with its blend of fun and emotion topped off with an impressively polished look and feel.
LATEST REVIEWS