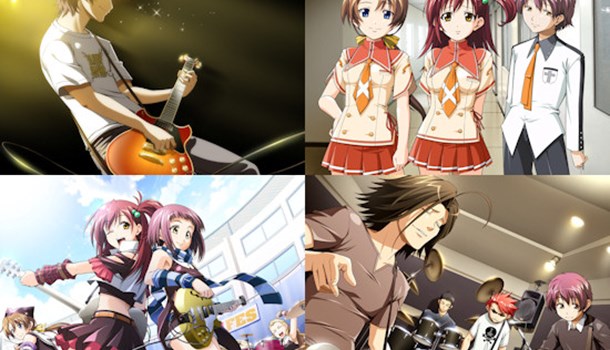 When we reviewed Manga Gamer's translation of the original Kirakira game, we actually found ourselves to be almost a little surprised by just how rich its experience was - Despite its typical visual novel end-game of choosing a girl to end up with from the bevvy around you, the stories which Overdrive wove in alongside this more simple concept were both engaging and occasionally emotional to push this already polished title along in a pretty impressive fashion.

We clearly weren't the only ones to enjoy Kirakira and its timely tale of love, punk sensibilities and music in a period where K-ON dominates the Japanese anime market, and thus Overdrive subsequently set to work on a "sequel", subtitled Curtain Call - although, for reasons I'll explain, I use the term "sequel" loosely.

Curtain Call finds itself split into two "stages" which are clearly interlinked while also allowing for the game to introduce various aspects to its plot, but in the grand scheme of things both stages spend a fair amount of time dealing with the title's new protagonist - Souta Honda, a short-tempered wannabe rebel and rock 'n' roll star whose attitude far surpasses his talent.  Put simply, throughout a fair portion of the game he's a bit of a self-centred ass.

After finding himself disappointed by the actions and attitude of a friend who has become a rock star and seemingly lost his focus on why he became one in the first place, Souta sets out to create his own band with his own rules, and so the first stage of the game focuses on these near-disastrous early efforts until they finally begin to bear fruit.  Running alongside this is Souta's obsession with and love for a girl named Yui Yoshimoto - A girl who also happens to be one of his rivals in a different sense, as she and some of her friends (including the sister of the original Kirakira's star) perform in their own band which is none other than the current iteration of the Second Literature Club from the first game.  Can Souta balance the love for a girl and his love for rock music within his rather fragile existence?

From here, the game's second stage takes more time to luxuriate in reintroducing characters from the original game, be it Murakami (who appears in both stages) and his band Happy Cycle Mania, or the original Second Literature Club members including Shikanosuke.  The pressures of Murakami's life as he considers his future is a centre point of this site of the story, but alongside it we also keep tabs of Souta and his own life in both rock and love.

While it introduces plenty of new characters as well as introducing old ones, Kirakira Curtain Call is officially a "fan disc" rather than a full-on sequel and it shows - Although we get some new music performed by the bands on show in the game, the background music remains largely the same and many of the backdrops and characters also haven't changed from the first game.  More importantly, there are effectively no important choices to be made throughout this visual novel - Souta and Yui's love story is the only thread which runs through it with no real opportunity to deviate, with the second stage of the game offering up no decisions to make at all.

Although Curtain Call tries to blend love, rock and emotion within its narrative, it never reaches the same heights as its predecessor - Partly because of the lack of choice available to the player (it's hard to feel anything for a character when you've had no opportunity to either shape their story or bring yourself closer to them), and partly because the story simply isn't as strong or far-reaching.  That said, if you loved Kirakira then it's certainly enjoyable to get to spend some more time with those characters and follow up on their later lives however briefly, and Curtain Call is another polished effort from Overdrive from its illustrations down to the voice actors and those all-important musical interludes.

In short then, Curtain Call is more of an encore for anyone who was a big fan of Kirakira rather than a good visual novel in its own right.  Unless you really fell in love with the characters of the first game then there probably isn't enough here to keep you satisfied, although to be fair you aren't paying the equivalent price of a full game so in terms of value for money it's hard to complain.

6
Curtain Call is a good-looking and polished follow-up to Kirakira, but it's best left to fans of the original visual novel.
LATEST REVIEWS