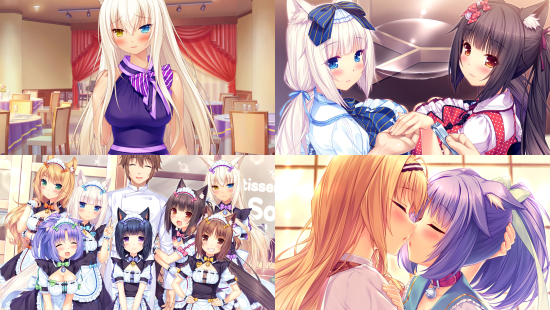 There have been times when I have been forced to consider whether my career choice was the correct one. I have found that, when you work in consulting civil engineering, you find that meeting members of the opposite sex to be, difficult to say the least. All day, surrounded by blokes. It’s a pain. Even so, most people I know in civil engineering have met their spouses through work.. Perhaps… I could retrain as a pastry chef and become a conqueror of catgirl maids. Though I suspect that NekoPara is not an example by which to live your life by, or actually a model to actually seek new relationships. However, one has to admire the way that Kashou goes about his life.

Could this finally be the completion of the perfect Cat’s Paradise, read on to find out.

The visual novels, so far, have focussed on those characters who have the most superficial depth. Chocola and Vanilla were very easy, Azuki and Coconut, a little deeper, but still easy compared to the glacial face that belongs to the ever-cool Maple. While Cinnamon’s lewd drooling makes her seem one-dimensional, underneath her soft, cute exterior lies a selfless personality. Maple and Cinnamon are almost a heroic duo, they are partners and, like the filling of a nice cake, utterly inseparable.

Their partnership is, as is Chocola and Vanilla’s, lifelong. They met when they were young and they were brought into the Minaduki household. Cinnamon was young, shy and scared of her new family and it was the headstrong Maple who reached out to console her. From that moment, Cinnamon and Maple were together with Cinnamon devoting maybe too much of her attention to making Maple happy. Problem is, it’s a bit difficult to make someone happy, when they are continually denying themselves what they love. For Maple, that love is music. Maple secretly wants to be a music idol. Though, this was a secret from the rest of a family until Shigure gets involved and submits an old video of Maple onto the internet. As you can expect from the online world, a video of a cute young catgirl singing anime songs goes viral quickly, and this extreme embarrassment just makes Maple withdraw more into herself. It is up to Cinnamon and Kashou to save her from herself, and finally express her true feelings.

Not all is sweet and fluffy with Cinnamon either as her selflessness is causing further emotional damage. Kashou notices it when Cinnamon’s personality begins to change in the café. Her smiles become false. Her actions become more uncertain. Even her drooling and her permanent high libido are curtailed. Clearly something is wrong, and Kashou take it upon himself to fix the problems of his wayward catgirls, and in doing so, he levels up their feelings from him in the usual, predictable fashion. Cue the return of Cinnamon’s lusty drooling.

NekoPara Volume 3 has evolved slightly from its earlier versions. The emotion engine has been given a graphical upgrade which has allowed the character’s expressions and mouth movements to function more closely to the dialogue. The animations are less static than previous versions and small cut-outs are now embedded within the interface to assist with multi-character dialogue. This helps resolve problems which the earlier games didn’t have, how do you manage to keep track of who is talking when six catgirls are bombarding you all at once with their cute dialogue!

NekoPara Volume 3 has a further significant change from its predecessors, its length. Unlike Volume 1 and 2, Volume 3 has fifteen chapters, or eight hours of “gameplay” with the optional DLC. This almost doubles the length of the experience from previous volumes. For details on how this affects the adult experience, see the section below.

As with the other games, the adult sections can be switched off, and without this content the game is fully safe for work with the story standing alone. Even without this content, the story works rather well and the sexy bits are just the frosting on the cake. What I found quite refreshing was that the stories didn’t just involve the two main characters, Maple and Cinnamon. All of the Minaduki catgirls get their time to shine in this volume, including Coconut (I still have a soft spot for the cute maine coon) and while this seems to be trying to keep the fans of each of the girls happy, it works to balance the story as each character gets their own time to develop and bounce off each other.

It goes without saying that I am a fan of the NekoPara series and with the anime due to be released next year and the fourth volume, I expect that there will be more to say in the coming years. Saigiri’s plan to have her brother take each of the six catgirls as his “catpanions” and create a catgirl paradise has been successful up to the stage where the bro-con wishes that she was a catgirl too! What comes next, who knows, maybe there are doggirls in the future?

As with previous versions, key scenes from the game are unlockable. Steam achievements are available and so is the soundtrack. These are unlocked on completion.

As always, the adult content is available as DLC for the game. Without this DLC the game remains free of any explicit scenes, though still definitely “not safe for work”. There are five scenes in all, almost two hours of explicit content featuring the coupling of all of the catpanions, including scenes with just Cinnamon, Maple and the highly sought after Cinnamon x Maple moments. No one is left out, and it finally seems like Nekoworks have finally sorted out their sound effects. No more silly putty pots! In all, the quality has improved since volume 2 and it is still super effective.

8
The Catgirl Paradise is finally complete!