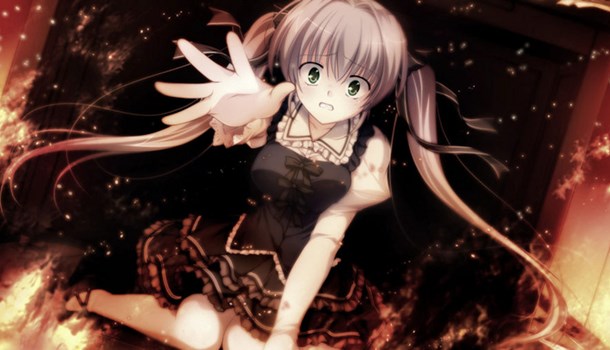 Root Double: Before Crime* After Days is a visual novel game originally released on the Xbox 360 and Microsoft Windows in 2012, with Playstation 3 & Vita ports in 2013, and now the Nintendo Switch gets it own version in 2020.

In game, the year is 2030, and children are being born with ‘BC’ (Beyond Communication), basically telepathy and empathy. Rokumei City in Japan, home to Rokumei Academy, an elite school for children with BC, is a research city with over 300 research facilities. Tragedy strikes as LABO, the 6th Laboratory of Atomic and Biological Organisation, suffers a nuclear reactor meltdown. Is this an accident, or an attack from anti-BC terrorists? From this point Root Double has two plots, Route A and Route B. 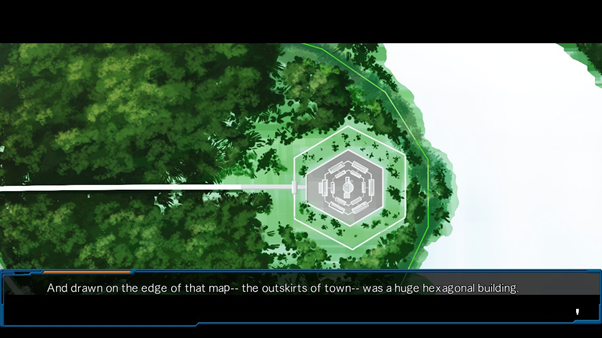 In Route A you are Watase Kasasagi, Captain of the Sirius rescue unit. During a call-out to a possible nuclear reactor meltdown in the LABO research facility you are attacked by a ‘mysterious monster’ and are knocked unconscious. Upon awakening,  you have no memory of who you are and why you are in the research facility. Upon meeting up with some more members of the rescue team (Kazami and Jun), you learn that the security measures have malfunctioned, the sprinkler systems have failed, the air vents are damaged and the security blockheads have trapped you and a handful of survivors in the lab for nine hours, with only a handful of anti-radiation medications that need to be reapplied every hour... and the radiation is steadily rising. As you travel through the facility looking for medication and a safe way out, you find bodies. These have not died from the explosions or the fires, but from gunshot wounds. That means there could be a murder on the loose, it could be one of your group, and as you don’t have your memories, it could even be you. 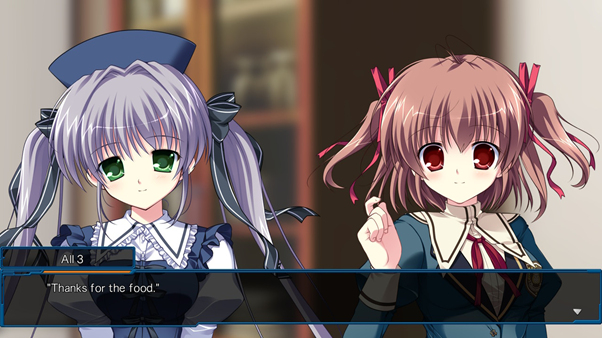 Left to right: Yuuri and Mashiro

In Route B you are Natsuhiko Tenkawa a high school student who has BC. You arrive at LABO with two of your classmates; your childhood friend Mashiro Toba and new French transfer student Louise Yui Sannomiya (or ‘Salyu’). Why you are there is a mystery to the player, when you see your other childhood friend and agoraphobic roommate Yuuri Kotono, you're surprised and quickly knocked out by an explosion - from this point on you go back and forward between the present and six days prior to the current situation. 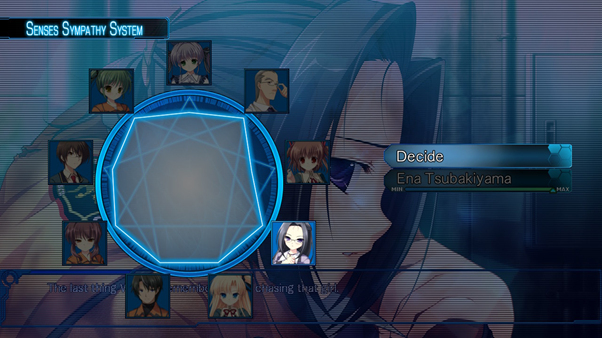 The gameplay is much trickier than a normal choice-based visual novel, as instead of answering questions and making choices through your answers, you have to use the Sense Sympathy System or ‘SSS’. The player has to adjust their impressions or senses using sliders, and you do this when the ‘Enneagram’ appears in the top left corner of the screen. The Enneagram is based on the Enneagram of personality, which is a model of the human psyche using nine personality types; Reformer, Helper, Achiever, Individualist, Investigator, Loyalist, Enthusiast, Challenger and Peacemaker. Each character in the game is a representation of one of these personalities and if that sounds confusing, that’s because it is.

For example at one point in the game you're given the choice to slide up or down for yourself, Kazami or Jun. Up to this point you have been fairly reckless, so I slid up for Kazami and Jun, and down on myself. I thought that conveyed ‘Listen to Jun and Kazami’, but instead I blew up, because I wasn’t ‘paying attention to my surroundings! So instead of making myself less reckless I somehow made myself moreso.

The Enneagram also glows different colours to tell you how important your decision is; blue means that this isn’t dangerous but can impact how people perceive you, orange effects actions in the game which can have dangerous consequences and red means this situation is very dangerous and there’s a high chance you’re going to die. You have the choice to ignore the Enneagram as well - this can do nothing or cause your rather explosive death. 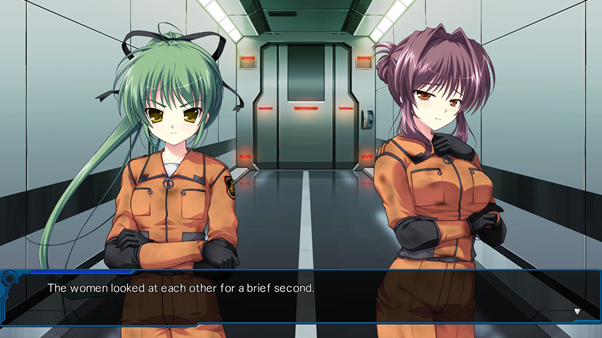 Left to right: Jun and Kazami

The characters are very important to the gameplay as they represent the different personality types that you can lean towards in making your choices. In Route A we meet Kazami Tachibana, the Loyalist and lieutenant of the Sirius. Kazami is cool headed and rational, while her co-worker, Jun Moribe (the Challanger), who is a rookie rescue worker, a lively hot-headed girl compared to her superior. Taken together they form the team for your character's rescue mission.

Civilians include; Kenji Ukita (the Reformer), working at LABO, Ena Tsubakiyama (the Achiever), a teacher from Rokumei Academy who was called to LABO for mysterious reasons, and lastly a relative of the research workers, Yuuri Kotono (the Peacemaker). 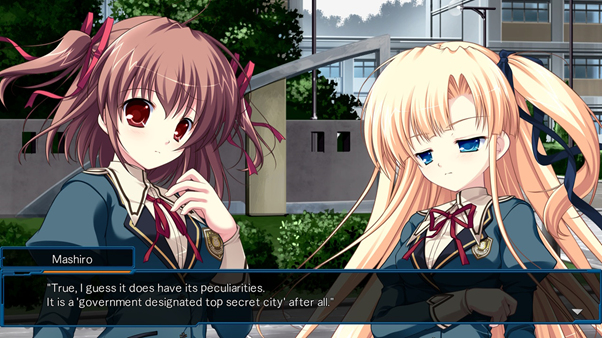 Left to right: Mashiro and Salyu

In Route B, the main characters include; Mashiro Toba (the Helper), Natsuhiko’s best friend, classmate and tomboy. Louise ‘Salyu’ Yui Sannomiya (the Individualist), is a new transfer student from France and child prodigy. Yuuri again, this time as Natuhiko’s roommate and whisperer of creepy things after dark(!), and the player character Natsuhiko Tenkawa (the Enthusiast), who used to be charismatic and outgoing but has had somewhat of a personality shift since ‘The Incident’. The characters crossover between the routes and have important impacts on each other’s plots.

The character designs are fine, with the usual "only in anime" style hair colours mixed into the more natural shades, animation on the characters when they are talking works well, with the mouths actually moving rather than static expressions found in some games. Some of the more dramatic moments are beautifully illustrated, working well, though there were a few sillier moments; one of Louise’s still images bounces across the screen through a fire, and while it should have been a dramatic moment, I found myself giggling at how funny it looked.

A lot of the issues I take are with graphics, Watase’s exploding memories from Route A just look very clunky and outdated even allowing for the fact the original game is from 2012. Route B has Natsuhiko’s flashback, where they’d obviously coloured the scene as normal, put a sepia filter over the top and turned the opacity down, which doesn’t make it feel nostalgic, instead making everyone and everything look like they're covered in in mud, I don’t understand why it was coloured this way, it probably would have been easier to just colour it all in a restricted pallet either with browns or in black and white rather than lazily throw a filter over it.

On a more positive note, there are some great musical tracks sprinkled throughout the game, creating a terrific sense of atmosphere, especially during the creepier moments that require an element of dread. I also enjoyed the theme song, though I find it irritating that text and images from this piece give a massive hint at one of the story's main twists.

While we're talking about irritation, I suffered from a fairly serious glitch that happened just after I died for the second time. After I died I went back to the quick load menu and chose where my last Enneagram choice was and loaded, I played the game through two chapters, all the time being told that the quick save was saving at regular intervals. However, after turning the game off for a lunch break, I returned to find that it hadn't actually saved any progress from my initial death and wouldn't quick-save again until I manually saved the game and restarted it. This seemed to fixed the problem; I blew myself up on purpose at the next red Enneagram choice just to make sure, and the quick save was working again. So save regularly and don't trust the system!

Apart from this there were some minor spelling errors (‘Sirus’ instead of ‘Sirius’) but nothing serious.

A feature I appreciated a lot was the ability to dim the black box behind the text. As someone with dyslexia, I cannot read white text with a black background, and the settings allow you to dim the box or turn it off completely, which made my game experience much more enjoyable.

Overall, I enjoyed both plots, though I found Route A more interesting than Route B. This route has a more intense feel to it, the characters reacted in the way that you expect people to react in a life and death situation, with some scared and others trying to be level-headed and pragmatic. I also liked the characters better in Route A - this may have been because the main characters in Route A are all adults (like me) making it easier to empathise with them rather than Route B’s teenager cast.

With Route A, the player was in the action from the moment the game started, while Route B had a much slower slow burn. This gives the game some variety of pacing as well as character, which is good as it gives the player different kinds of stories to enjoy, and if you don’t take to one you might enjoy the other. You do, however, need to complete both to have the full story.

The Game mechanics can be confusing to get used to, but persevere and you'll find an enjoyable game here. After all, part of the fun is collecting all those bad endings!