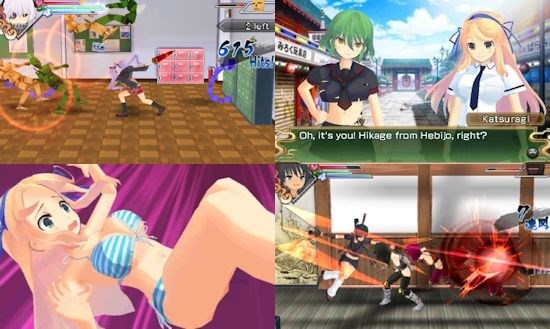 I will start this review by stating even though I have a bit of a reputation for enjoying fan service (only a bit? - Ed), Senran Kagura is actually a new franchise to me. I am diving into this game blind to the characters and the universe. In fact, all I know of the franchise is that it involves ninjas, girls, fists and tits. Sounds like a good start to me!

Senran Kagura is a game that revolves around two schools, Hanzo and Hebijo. Each of these schools has a secret - they train select pupils in the shinobi arts, allowing the pupils to perform near-miracles and secret techniques known only to the shinobi. These two schools have conflicting philosophies: Hanzo is on the side of justice, and Hebijo is on the side of using the arts for influencing others. As expected, these polar opposite philosophies lead to conflict, and this is where everything begins, especially when one school tries to take the shinobi scrolls of the other.

On starting anew, the game gives us a single decision - Hanzo or Hebijo. With Hanzo you are greeted by the cute and slightly ditzy Asuka; with Hebijo, the stone faced yet alluring Homura. However, the game does recommend the first play through be done using the Hanzo route, and on this occasion I decided to listen to the recommendation and dive into the classroom of the Hanzo academy shinobi.

Senran Kagura Burst allows you to play with any of the initial five girls as they train and fight against the girls of the Hebijo academy. The game is a side-scrolling fighting action game filled with training, story quests and side challenges which can be completed with any of the characters. Each of the girls have their own spirit animals which unleash the special abilities provided by the shinobi scrolls carried on the girls’ persons during any fights. One of the good things about the way the game is formatted is that the missions, even those which are character specific, can be played through with any of the other characters early on. This allows the player to accustom themselves to the different fighting styles and abilities of each of the characters. From Asuka’s twin sword style, Ikaruga’s long sword and scabbard, Katsuragi’s and Hibari’s melee style using their fists and legs, and the ever technical Yagyuu with her offensive umbrella. Each of the girls allows for a totally different fighting style, and combined with their special moves, it provides the player with multiple means of completing each mission beyond the simple mashing of buttons.

To the gameplay itself. I am not new to the world of side-scrolling action games having wiled many an hour playing Ikkitousen on a flight back from Japan a few years ago. Senran Kagura Burst shares many similar features to its cleavage exposing cousin as well as many improvements. As with many other side-scrolling games, the action itself is a mix of frantic button mashing and swear words intermixed with the 3D animation of breast jiggling physics as each of the special moves are unleashed. The fighting itself is very simple and quick to grasp - the game provides a light and heavy attack which when combined gives the player a small range of combo moves. There is a rush and jump function, allowing the player to perform aerial attacks and escape the inevitable mobs of enemies. The special move is charged up via continuous combo attacks that are maintained (the best I had was a 1220 combo attack) through the use of aerial attacks between waves of enemies. The missions themselves vary from time trials (kill x number of enemies in x amount of time), duels between the characters and standard wave-based attack levels. After a few hours these gameplay formats do get rather repetitive - however, there are other ways for the game to keep shiny-eyed individuals like myself busy.

One of the other little features during the missions is the “Frenzy” mode. By pressing both shoulder buttons on mission start, the girls remove all of their clothes leaving themselves in their underwear. Not only does this give the player an additional perk but the girls receive a damage bonus, albeit offset by a defence and hit point reduction during that mission. So far, I have yet to find a reason why anyone wouldn’t play the game fully in Frenzy mode. I mean, girls fighting in their underwear, that’s what this game is all about!

Okay, so I give in. The titillating nature of the game is one of the key attractors to me and as with other fighting games, one of the bonuses is the ability to dress up the girls and fit them out with accessories. It is only a matter of time until I get ninja-catgirl-maids. Oh yes... and if this isn’t an option, then it should be!

Like other games before it, Senran Kagura Burst is a continuation of a long tradition of gratuitous fan service games where damage to the person causes damage to clothes, exposing the flesh beneath. These games, although fun, do leave oneself with a sense of guilt as what you are playing is, for all intents and purposes, highly exploitative against women. It certainly doesn’t help that both Hanzo and Hebijo are girls’ schools, and therefore the only recipients of the clothes destruction are underage girls. It will be interesting to see what the wider press thinks of the game and how it fares as actual sales figures come in. Until then, I will continue to play what is in all fairness a fun game, albeit with very suggestive and questionable content.