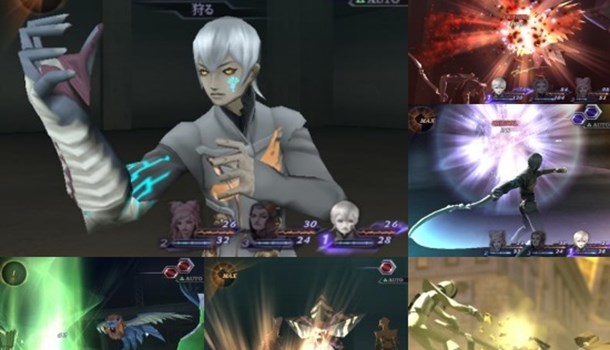 Hot on the trails of its predecessor, Digital Devil Saga 2 now makes it's appearance on PSN as a PlayStation 2 Classic. Following straight on from the first game, Digital Devil Saga 2 sees the Embryon team ascending to Nirvana. However they find that this new world is not quite the paradise they were promised - Serph and company now find themselves in another post-apocalyptic wasteland filled with its own struggles and turmoil. As with the junkyard, the humans of this world also bear the power and hunger that comes with their ability to transform into demons, and now Serph and the Embryon must work together with the resistance movement of the world to discover the truth behind the demon power's origins and also reunite with their lost and captured comrades.

Being as it is a direct sequel, Digital Devil Saga 2 wastes no time in getting the player into the swing of things, and the game plays with the assumption the player has already played the previous title. This is evident by how quickly tutorials are handled and by how frequently Digital Devil Saga 2 makes references to the previous game. While the first game handled the characters becoming more emotive as a side effect from gaining their demonic powers, most of the cast has been developed to the point where their traits and motives aren't explained as heavily as they were in the previous game. While there are still character interactions and such, the majority of these are handled as optional dialogue that the player can choose to engage in between areas. This time around the game's story has embraced the science fiction and dystopian world aspect - frequent references are made to data, computer terminology and even scientific terms. While the enemies appear as demons still, most of the encounters will begin with enemies arriving in human form before transforming in a similar style to how the player does.

As with the previous game, the battle system plays exactly as it did with the same objectives in mind. The aim is still to take advantage of enemy weaknesses and inflict critical hits to gain as many turns as possible. Enemies can still be frightened, leading the way to being devoured more easily and resulting in increased experience gained after battle. This time around however, the game has added in a new mechanic known as “Berserk mode”, in which the playable characters cannot control their power and enter a state where they are half human/half demon. In this mode, all attacks that connect do critical damage but players lose access to magic and have their defence weakened considerably, although winning battles in this mode grants more experience and better bonuses. While the battle system hasn't changed other aspects of the game have, including the Mantra system.

In Digital Devil Saga, abilities were learned by downloading Mantra, with the player having access to the base level of each one, unlocked higher tiers as they progressed. This time however the Mantra system has changed to a hexagonal grid, with adjacent Mantra unlocked and ready to learn once each Mantra has been learnt. Digital Devil Saga 2 also throws in a strategic element to this by having certain Mantra hidden, only to be revealed when all surrounding Mantra has been learnt. The trick with this is that the surrounding Mantra don't have to be learnt by just one character, meaning that multiple characters can unlock different surrounding Mantra on the grid unlocking it fully for everyone else to use. While the system changes do offer quite an interesting levelling mechanic it doesn't feel as initially customisable as the first game's system did, giving off the impression that the game wants the players to upgrade their characters in a certain wayinitially before unlocking more Mantra and gaining access to more of the board.

Luckily this doesn't prove problematic, as Digital Devil Saga 2 gives the player access to a full team much quicker than the previous game did, meaning that a character with a specific role or skill set will be at hand when necessary, making battles easier to handle. Another way that Digital Devil Saga 2 gives players a bit more flexibility and depth is with “Karma Rings” - these are pieces of equipment that increase player stats and also adds bonuses to battle. The best part about these rings is that they can be customised in a way that can make a character far more powerful in a certain way or compensate for their weaknesses. Finding the right balance is a key way to make characters stronger and battles more manageable.

While Digital Devil Saga 2 retains everything that made the first game great there are a few things to note. The story, while incredibly dark in the first game, feels more science fiction focused. Dark elements and twists are still present but not quite to the level they were in the previous game. Of course this aspect is clearly subjective and its tone change isn't sudden or jarring but very subtle - some may see this as an improvement, giving the overall story more meaning, but others may see it as over-explaining things too much rather than leaving things ambiguous as the first game did. In order to fully enjoy the story, the first game is a mandatory investment since certain events are eluded to in order to invoke player memories rather than explain details. Jumping straight into this game without having played the first may cause a lot of confusion as to what is going on, so it should be noted before playing this game to play and complete the first one beforehand. There are also a few frame rate issues present in this second game - however, these don't affect the overall game and don't interfere with battles and cut scenes, only seeming to be present in the field when there are quite a few NPCs on screen. This may be a side effect of the process of porting the game to the PlayStation 3, or perhaps it's due to the emulation process, but it is not invasive enough to cause any problems.

These few issues aside, the game still plays well and feels just like its predecessor. The story goes in quite a bizarre direction at times, but is still rather interesting and provides a good ending and sense of closure.  The mechanics that have carried over should make players of the original feel right at home while the new additions add enough new content to add a bit more depth to proceedings. It should go without saying that if you played and enjoyed the first game, then this is a worthy sequel that offers a satisfying conclusion to the Digital Devil Saga.