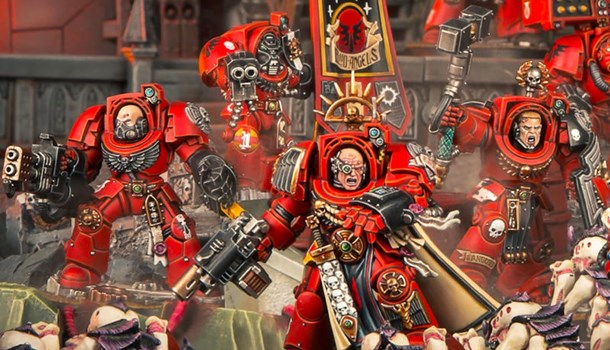 In the Grim Darkness of the far future there is only WAR!!!*

*Also shoulder pads to make any inhabitant of Azeroth jealous  and a setting that began as blackly comic, but is now just plain black…

For years Nottingham-based Games Workshop has been the top dog of the tabletop miniature wargaming, with their Warhammer & Warhammer 40,000  settings both riffing on existing fantasy & SF tropes whilst creating something uniquely British in its sensibilities. At the forefront of this success are the poster-boys of 40K, the gene-forged warriors of the Adeptus Astartes, the Space Marines – think genetically enhanced warriors, implanted in  their teens with a number of extra organs that remake them into titanic post-humans, mentally re-conditioned to defend the Imperium of Man against the Alien, the Heretic, and the Mutant, all  whilst glad in powered battle armour wielding a sidearm that is essentially a mini-rocket launcher. And these are the “good guys” O_o

Anyhoo, in the last few years GW have been looking at alternative ways to introduce new-comers to their settings so teamed up with Max Factory a couple of years ago for Space Marine Heroes: Wave 1, a blind-box collection of 13 highly individualised Space Marine kits, each of which can be pushed off of the sprue then fitted together without the need of glue, sold out of a counter—top box that (somewhat adorably) came in the shape of the classic Space Marine transport, the Rhino APC, with the intention of them being priced as “impulse buys”. Now Wave 1 garnered a LOT of interest from fans not just in Japan, but made folks balk at dropping the £115 for a full box of 24 packs (especially when the 13th model – a Captain- could only be obtained from Japanese GW stores). The figures themselves though were very well sculpted and proved a success, and have begun to get a proper release outside of Japan. Inevitably then there would be a second wave, which is what will be looked at here.

There were some changes made to the distribution between Wave 1 and Wave 2, partly due to the shift from the Tactical Squad of Wave 1 to elite Terminators in Tactical Dreadnought Armour, so instead of 13 models from Wave 1 Wave 2 only features 7 models, one of which (a Standard Bearer) is exclusive to a paint set I’ve not yet been able to source so will not be discussed here, and the CTB only includes 6 kits instead of the 24 of Wave 1. On the upside though each box is guaranteed to get you a full set of 6 Marines, and the price bracket is comparable to buying one of the standard Terminator squad kits from Games Workshop, and is even competitive to the more bespoke  kits they put out (but lets not go down that rabbit hole…).

The models you get do share some of the features from the Wave 1 design, so they can be pushed off the runners easily enough, are push-fit, and feature nicely sculpted bespoke bases, and all 6 come with a choice of the distinctive Terminator helmet (in a couple of cases with some unique detailing) or an equally distinctive bare-head (hint; I went for bare-heads). There is also an instruction booklet specific to the kit in each pack, as well as a character-specific bio card with a painted example of the model on the front, with a quote from the character, then with a piece of character art on the reverse with a brief bio (all of which is in both Japanese and English – a nice touch). The models themselves are cast in red plastic instead of the blue of Wave 1, as whereas Wave 1 was presented as the “default” Astartes, the Ultramarines, Wave 2 is presented as members of the Blood Angels (long-lived, mournfully heroic warriors who are secretly dealing with being vampires…).

The six in the box are:

As noted above the models are all presented as members of the Blood Angels in artwork and the character bios, but – again much like Wave 1 – the actual models feature no iconography specific to that Chapter of Space Marines, so you are free to paint them as you wish. The sculpts themselves are quite excellent, each being full of character from stoic Phaello, blazing away with his Storm Bolter, to the bellicose Ebellius, braced to unleash a salvo from his missile racks, to my personal favourite of the set, Sanyctus, sprinting forward to close with the enemy, his armour marked by bullet impacts, chips & slashes, but it’s the way they’ve given this hulking warrior a sense of speed, something difficult to get from a terminator sculpt but rendered here quite superbly.

Now, cleanup was minimal, but given I intend these for at least the tabletop if not for display, I did take a small file to the points where the parts connected to the sprue, as well as the few moldlines. I may have also drilled out the gun barrels but I’m kinda obsessive like that. Assembly was quick – if you have any experience modelling then you may not even need the instructions – but I did use some plastic glue as I wanted to ensure these will  stand up to the tabletop, but it’s not essential. The end result is six incredibly characterful depictions of one of iconic elements of the 40K universe, but there is one, slight problem that needs addressing.

In Wave 1 of Space Marine Heroes the core conceit was you got a full 10-man Tactical Squad, with the extra models giving you options for the special & heavy weapons the squad carried. Unfortunately  Whilst Wave 2 is very, very good in terms of sculpting, the only model you can legally play is the Captain, as he is an option in his own right. The other five though all represent elements of various Terminator Squads, but not one you could build out of the official army lists. They would though work if you want to add a bit of flavour to existing units or, and this is what I plan to do, as a painting project. I’m thinking to paint each one in the livery of a different Chapter, see how good I can make them look.

Overall though an impressively sculpted set at fairly reasonable price point. Possibly of interest mainly if you are already familiar with the FarFutureGrimDarkiness, but worth a look if they interest you.

7
Excellent & easy to build sculpts, but perhaps not the best introduction to the GrimDark.