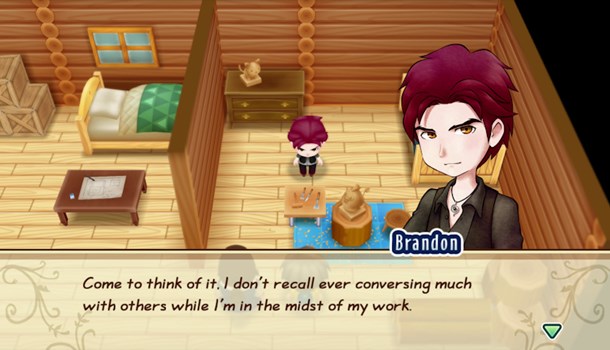 Story of Seasons: Friends of Mineral Town is a remake of the Gameboy Advance game, Harvest Moon: Friends of Mineral Town which was released in Europe in 2004. Following the traditions of the series,, the game sees the player take ownership of a farm that is but a shadow of its former self. The player will live their life working the farm, interacting with the local townspeople and exploring the surrounding area as they renovate the property and surrounding agriculture.

The game is a farming simulator in the classic sense, it's origins in fact being one of the games that helped define the genre, and it wastes no time in settling the player into their new surroundings and putting to work. At first things may be overwhelming, with a lot of information to take in about how to approach the various areas that require managing, but the game is rather forgiving and eases the player in. When starting out, the game instructs the player to clean up the debris on the farm, forage the local area and sell any unnecessary items to make money. When enough money is earned, seeds can be bought in order to grow crops. Growing these crops and selling them will make the player more money. Thus begins the routine that players will quickly become accustomed to.

In order to help with this, the player has access to specialised equipment in the form of farming tools that can be upgraded once they reach certain usage levels. Upgrading the tools makes things more efficient; for example, upgrading the the watering can allows more tiles of the field to be watered at once, whilst the hammer upgrade allows bigger boulders to be smashed which increases the materials you have to use. Upgrades require both specific ores and money. Thankfully the ores can be found in a local mine, and once I became used to the game's routine, I was able to easily tend to my farm every morning. Wake up tend crops, clean up farm a bit, visit mines, gather materials before heading into town to shop and speak with the local population. Rinse and repeat.

In town there are several different characters to befriend and quite a few options for a potential spouse. By talking to the characters regularly and giving them gifts, you can follow dialogues that expands the character and backstories of the townspeople, which leads to friendship and perhaps romance.

The main aspect of the game though is the farming. With access to a lot of land that can be tilled, barns that can raise animals and, later, sprites that can help with certain tasks. I must confess that once I got into the hang of things and set out a routine I found myself getting rather addicted to the process. Its a game where hours seem to just fly by. This is aided no end by the game's considerable charm.

With the way the world is right now, this game is the perfect way to relax and de-stress. You can lose yourself in a world where all that matters is tending a farm and making friends with people. I found that I preferred playing the game in hand-held mode on the Switch, sitting back in a comfy chair, focusing on the screen and taking my time with the trial and error of getting things right on my farm.

While the game is super relaxing there were a few sources of frustration. Mainly the controls, as it takes some practice to get used to using the left joycon directional buttons to cycle between farming tools, pressing Y to use them and using the right joycon stick to cycle between items to use. Enough practice will see it become second nature, but it's not the most intuitive set of controls to get to grips with. Yes, the game is a bit formulaic, but as remake of a game of 15 years old, they decided not to reinvent the wheel and it doesn't feel like much was added since the original release.

I can't deny how charming and relaxing this game is to play. For those who have always wanted to try a farming game but not sure where to start this is a great entry to the farming genre and a recommended title to while away the stress and those hours of free time.

8
A charming and relaxing farming game