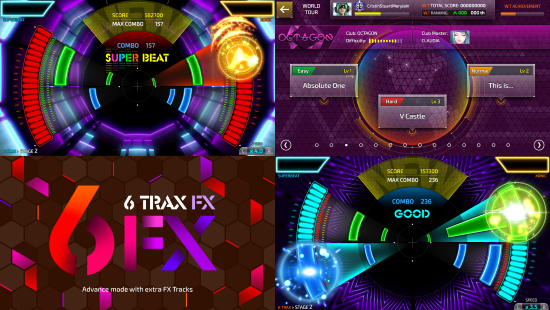 Can there be a better Sunday than lazing on a sofa, cups of tea within reach, a large soppy dog or two, at your side, decent Bluetooth headphones and a game that is a combination of ruthlessly hard and completely addictive that ensures hours pass like minutes? The answer is of course rhetorical, and thanks to Superbeat Xonic, a new breed of rhythm game just released in the western world by Rising Star Games and created by the same team that brought us the DJ Max Portable series, I never had to do any washing up or actually talk to anyone.

Yes, Superbeat Xonic is that immersive and addictive. Though, to be fair, when DJ Max Portable 3 was released on the PSP, I had the exact same problem.

Things have changed a bit in the rhythm gaming arena since the DJ Max Portable series though. With the invention of the touch interface games have moved more into the touch arena, and since Cytus Lamda caused many an aneurism and DJ Max Technika caused many a PS Vita to be thrown across the room in a fit of frustration, games that like to focus on the use of touch controls for game play have had a hard time. After all, it is the touch controls that are the most hated of moves on any of the Project Diva F games. However, and I don’t state this lightly, Superbeat Xonic is the exception. Finally, someone has learnt that the PSVita is actually a large device to cradle, and perhaps touch controls would be better served within reach of a thumb. Finally, a developer has learnt what ergonomics are and to fight the inevitable thumb cramp a full swathe of button controls are also available. It’s not a difficult design decision to make, but clearly a decision made by people who have listened to feedback played the game.

Superbeat Xonic is a game that is purely focused on its core rhythm gameplay, with several flavours available to provide challenges. The simplest version is the 4 trax mode. Two trax to the left, two to the right, and you have a couple more variations with flicking notes and hold notes. So at most, a combination of 10 different notes, which on the harder difficulties come at a frightening regularity. This is the simplest mode, with 6 trax adding two more trax to bend your mind, and 6 trax FX giving your index fingers something to do with the PSVita’s shoulder buttons. This final mode is not available to begin with, thank god.

Like its DJ Max predecessors, Superbeat Xonic relies on a talented group of South Korean and Japanese artists to provide the majority of the musical soundtrack in a range of musical genres from the cutesy idol pop to the dark and grungy house and electro, and with the occasional classical and video game hit to keep you guessing. Fans of the series will recognise names such as Planetboom and Tsukasa.

As you advance in levels and skill, more songs are unlocked through the game’s experience scale which ranges from Level 1 up to 99, with unlockables at each stage. Given it took me the best part of three hours to get the meagre points to attain level 15, and it didn’t take long for my eyes to start losing the ability to focus once the fade effects, the speed multipliers, mirror modes and the two simultaneous moves on different hands kicked in, there's plenty of challenge here. I kid you not, on some of the eight star difficulty levels I was sweating and swearing, in equal proportions. In general, songs rated 1 to 3 are accessible to all. Four and five are difficult, but they don’t do much in the way of simultaneous notes. Six to eight are barely doable. Stretch first. Nine, don’t even think about it. It’s suicide. Time to grow more thumbs. Ten, it’s time to bring in a tame South Korean to play for you as those notes are like a blur. I will get myself trained, it just takes time. I remember it taking a good six months to get past Whiteblue on the triple trax mode on DJ Max Portable 3. Practice makes perfect!

In addition to having these familiar play modes, Superbeat Xonic brings back a club style mission system which will be familiar to those who have played the DJ Max Black Square game. Basically you are to progress through a series of world clubs, completing three missions as you go. Each mission is progressively harder, but the rewards are more unlockables, achievements and - more importantly - points that contribute to your DJ World Ranking. Now this ranking system is quite interesting. It is collated on a per country and worldwide basis; admittedly, the top spots are all saved for those in South East Asia. Not exactly a surprise there.

The game’s song selection is vast, and likely the entirety of it may escape me as it has done with the other entries in the franchise due to me being a bit too time strapped to devote time properly to unlocking everything. However for those able to devote time to it, all of the musical pleasures are available to all, though there is no mention of additional songs available via downloadable content.

One thing I have missed which previous games have had was the face-to-face mode played via Ad-hoc which was present in the PSP games. I would have liked the chance to challenge my friends, and hope that this could be a later feature.

Superbeat Xonic has enjoyed a simultaneous release in the western hemisphere with a (very) limited edition mirroring some of the previous DJ Max collector's editions, complete with vinyl and CD soundtracks and a physical copy of the game, but the majority of us will have to settle with the digital edition which is now available on the Playstation Network. This is a must have game for those who enjoy a challenging rhythm game, or who are past fans of the DJ Max franchise.

8
An addictive and challenging rhythm game.