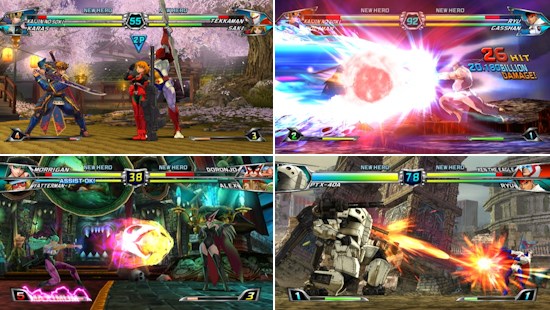 When this title was first announced we all assumed this would be an import only title - surely licensing issues would prevent the worldwide distribution of such a sparse collection of characters?

Apparently not, because here I sit with a UK copy of the game, and I can happily say that its been worth the wait. Tatsunoko vs Capcom is a 2 on 2 beat-em-up in the grand tradition of the Marvel vs Capcom games, and though the character roster won't be as familiar as Marvel's colourful cast, you'll still find you recognise more characters than you might think.

Tatsunoko is responsible for a plethora of costumed heroes, most notably Science Ninja Team Gatchaman, which made it to the West as Battle of the Planets (or G-Force) - the game includes Ken the Eagle and Jun the Swan (or Mark and Princess to us), Casshan (who received a live action film recently) and Karas, which is about as current as the game gets.

On the Capcom side you have some unusual choices - characters from Megaman, Rival Schools, Darkstalkers and Street Fighter can all be found, but there's also the PTX-40A from Lost Planet and Saki from Quiz Nanairo Dreams and even Viewtiful Joe makes an appearance.

The game uses a simplified fighting system, with 3 levels of attack, low, medium and strong. Punches and kicks aren't separated, but additional buttons allow you to call in your partner for an assist, change places or even launch spectacular specials.

Due to the controls, it's possible to button-mash your way through the Arcade mode, which opens it up for less experienced brawlers. Persevere with the unusual setup and you'll find yourself able to consistently perform moves and introduce some skill into proceedings.

Probably the most striking aspect of the game is the wonderfully over-the-top presentation - powerful moves are accompanied by ridiculous figures on the screen proclaiming "4.925 Billion damage!" - it sounds absurd but it lends itself to the colourful characters and interesting backgrounds perfectly.

The characters are modelled in 3D, which seems an odd choice for characters that are, mostly, usually rendered in 2D. Of course Capcom has been going down the 3D route ever since SFIV, so it shouldn't really be a surprise that its employed here.

Repeat play is rewarded by Zenny, the in-game currency that allows you to buy items in the shop such as character colours, galleries and even (I suspect) additional characters. Not all items are immediately available, and those items that are unlocked generally reflect the character you've been playing with, so you'll have to get through everyone to unlock them all.

The game is tremendous fun - it's loud, bombastic, colourful and unashamadely cheesy. It won't drown you in the subtle mechanics of Street Fighter, and although it loses depth, it also makes it very accessible to anyone who fancies a hit (no pun intended) of nostalgia. Add a point if you're an anime fan, because this will have extra appeal for you.

8
Loud, chessy and proud, this is arguably the best brawler on the system after Smash Bros.