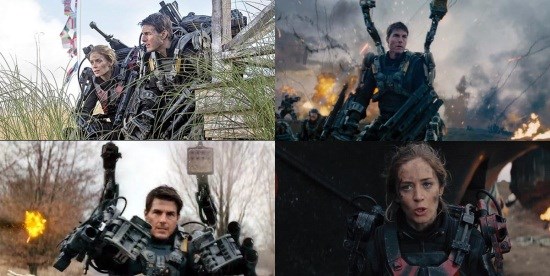 Japanese literature has a strong tradition of hard sci-fi which rarely makes much of an impact in the west due to its limited appeal to a publisher and the even more limited audience that manages to find it. That could be about to change however, as Edge of Tomorrow hits the big screen, adapted from Hiroshi Sakurazaka’s light novel All You Need is Kill. But, as with all Hollywood adapatations of Japanese properties, one has to ask – is it going to be a good film or is it going to be another Dragonball Evolution?

The world is under attack from a deadly group of aliens known as Mimics, and Tom Cruise stars as Major William Cage, a cowardly PR man who has dedicated his military career to selling the war in order to avoid actually partaking in it. Unfortunately, this is about to change for the worse as he’s assigned to a new task force to report on the war from the front lines at a massive counter-offensive on the coast of France. After unsuccessfully attempting to blackmail his way out, he finds himself stripped of his rank and labelled as a deserter, only to be forced into combat with the frontline troops anyway under the charge of Bill Paxton’s Major Farrell.  The initial assault goes disastrously, but Cage manages to kill a single enemy, which starts off a bizarre Groundhog Day-style scenario in which he is forced to relive the same two days over and over again. His only hope to end the cycle is to become a much stronger soldier and to rely on the army's figurehead – Rita Vrataski, the Full Metal Bitch.

Having read the novel just prior to seeing the film its proven pretty difficult not to draw comparisons between the two - perhaps unfairly so - but at the same time this is an adaptation, and such works live or die by how successfully they transfer the original story to a new medium, so I am going to have to start off by talking about how successfully this has been achieved. The answer sadly, is not very - the only things that have been taken from All You Need is Kill are a few character names and the basic concept. Whilst some decisions are understandable – a Japanese lead was unlikely in this kind of budget for example, and having the Jackets as they were described in the novel was also going to be cost-prohibitive - but other changes are less understandable. Altering the lead role from a bog standard soldier to a coward feels pretty weak and only seems to exist in order to justify the existence of the film's main recurring scenes of Cage joining up with the squad and being generally disapproved of. Also hideously out of place is the change to the Mimics modus operandi in order to allow for a more traditional Hollywood climax, which throws out the entirety of the novel's second half to make way for a glorified Hollywood happy ending which you can see coming a mile off. It really takes most of the punch out of the story, and given the art film tone and aesthetic of the film it's inexplicable why they chose to do this.

Aside from the adaptation there are other problems too. The Mimics themselves are horrific to look at, with poor design work and bad CG making them look like cast-offs from an early 2000s computer game. The Groundhog Day repetitions try to feel fresh and fun, but focus far too much on the exact same sequence of Cage meeting his new squad who are never more than blank slates with a single personality trait, which gets very boring. The constant allusions to D-Day (the film even comes out in the States on the anniversary) are also really ham-handed, over-the-top and don’t work too well, particularly given that the film's 12A rating ensures that it's stripped of any of the violence and blood that it would need to evoke any of the sense of threat or realism which the film desperately needs.

Aside from these issues, if I remove myself from my knowledge of the source material as best I can the film does function as a typical Hollywood action film and certainly does better than other recent fare like Elysium. The action is kept fast and fluid and is entertaining to watch, and there’s a constant thread of humour running throughout which works really well given the nature of the story literally allowing the same gag to keep playing over and over and still be funny. Tom Cruise gives his usual solid performance though there is admittedly not a huge call for him to stretch himself too much, and there’s a genuine chemistry between him and Emily Blunt's Rita. Blunt in particular is excellent here, calling to mind echoes of other similar characters (particularly Farscape's Aeryn Sun) and if the film had used its changes from the original work to focus more on her character then it could have led to something really great.

In the end then, this is a film that’s really going to live or die based on your knowledge of the original. If you’ve read the book already then I’d probably say waiting for a rental wouldn’t mean you’re missing out on anything. If you haven’t read it yet then you’ll probably have some fun watching it, so those people could add another point or two to the score below (though after you’ve done so you should absolutely go pick up a copy of the novel to see the difference between them). So there you have it - Dragonball Evolution it is not, but neither does it pack the punch it needs to be strong in a year that’s already packed with big sci-fi films.