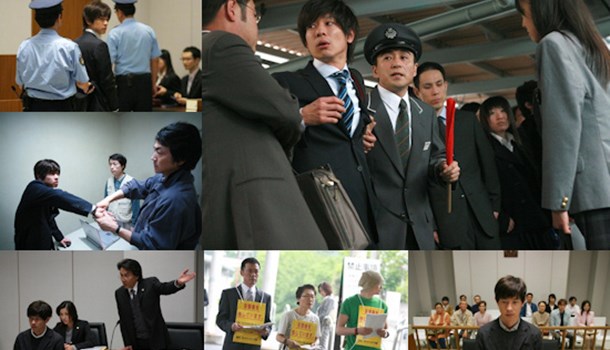 I Just Didn't Do It (Soredemo Boku wa Yattenai)

Early one morning Keneko Teppei (Ryo Kase) is rushing for a train. After years of being able only to find part-time work, he finally has a promising interview for a good full time job. Realising he might have forgotten his CV, he gets off his usual train to check if it’s in his bag. It’s not, but there’s no time to go back now he’ll just have to deal with it when he gets there. Zipping the bag back up he just manages to jump back onto the train before the doors close and is shuffled into place by a passenger pusher. Annoyingly, Teppei’s jacket didn’t quite make it into the train with him and is caught in the door. Teppei tries to free himself and his squirming provokes consternation among his fellow passengers. The woman next to him gives him a bit of a funny look and, assuming he must have bumped her, he apologises and stops squirming so much. However a few minutes later a quiet voice starts firmly saying ‘stop it’. Teppei tries to look around to see what’s going on but he can’t see anything so thinks no more of it.

That is, until he gets off the train and a high school girl grabs hold of his suit sleeve. She then accuses him of having groped her on the train. Teppei, totally confused, looks stunned and tries to deny the accusation but another man comes the school girl’s defence and calls a station guard. Without really understanding what’s going on Teppei is taken off to the office while the police are called without being given an opportunity to explain. The other woman from the train, whom Teppei had apologised to, notices what’s happening and tries to help Teppei by explaining to the guard that his jacket was caught in the door and he definitely hadn’t been molesting the girl but the guard isn’t interested - he rudely slides the door closed across her face without even taking her details down for further use.

Things then go from bad to worse as Teppei is ‘questioned’ by the police who again aren’t interested in his side of things. They urge him to confess and force him to sign the statement which they have prepared for him. He’s then taken into custody without being given any kind of explanation or informed of his rights. An experienced prisoner who seems to be in charge in his cell explains what’s what and tells him to ask for a public defender. However, you guessed it; the public defender also tells him to confess, settle out of court and hopefully go home right away. Go to trial and it might take months, with bail difficult, and even then you will probably be convicted. Japan has a 99.9% conviction rate, there is just no point going through the farce of a trial even if you’re innocent.

Masayuki Suo might be better known for lighter fare such as Shall We Dance but I Just Didn’t Do It is a scathing attack on the injustice of the Japanese legal system. Everything is geared towards gaining a confession. There’s no real presumption of innocence until proven guilty, an accused person is heavily stained by the accusation of guilt and as a society which places such stock in authority no one really wants to believe the police have made a mistake by arresting the wrong man. Trials in Japan are heard in front of a single judge who often tends to side with the system, leaning toward the prosecutors and police. An acquittal is almost like a failure for the legal system, a loss of face, and there are even penalties for judges who are seen to acquit too often and therefore appear ‘too soft’ on crime. The burden rests on the accused to prove his innocence beyond all doubt, not just the shadow of it. If there is even a possibility, however slight, that guilt could be argued the judge will almost certainly convict.

Teppei is, then, in a very grim position. Train groping is, sadly, one of the most or perhaps the most common crimes in Japan and the nature of the offence is such that it is something that a guilty man would go to the gallows proclaiming his innocence. Even the young female lawyer that is eventually assigned to him is reluctant to take the case as the crime (and its prevalence) disgusts her; she is predisposed to assume guilt. Another man who had been in the same position and is fighting his conviction in the higher courts (Ken Mitsuishi) provides valuable assistance but it really does seem hopeless. Nevertheless Teppei is indignant and fully committed to proving his innocence no matter what.

I Just Didn’t Do It is a frankly frightening look at the vagaries of the Japanese legal system. Though it occasionally succumbs to that slightly jarring feeling that happens when an actor seems to step outside himself to offer some useful statistics, the film remains interesting (and sadly) horrifying throughout. It’s important to remember the high school girl here is not the villain, she didn’t simply make up what happened to her (and apparently has happened to her several times before), and she has what she believes to be good reasons for identifying her attacker. Suo’s glare is directed at system that is no longer interested in truth, innocence or guilt and instead has become dedicated to perpetuating its own glory. Teppei’s prolonged ordeal does of course mean that the real train groper (and thousands like him, along with those who’ve paid fines and gone home with nobody the wiser) is still out there, presumably going about his usual business. When a justice system fails to protect its people the system no longer has purpose. Suo’s film perfectly captures the frustration of someone caught in a never ending loop where no one will listen to their side of the story. It’s a very angry film, charged with the frustration of being an unfairly persecuted innocent man. Even if it is hopeless, Suo is very much with Teppei’s determination to stand up for himself and not give in to the pressure to confess. Perhaps if more people were inclined to do the same the trial system would become less of a foregone conclusion.

I Just Didn’t Do It was screened as part of the Japan Foundation Touring Film Programme, which takes place in London, Sheffield, Edinburgh, Glasgow, Belfast, Bristol and Nottingham.  You can find more details about these events on the official web site.

8
A harrowing account of what it’s like to be trapped in the hellish nightmare, constantly screaming your innocence at a brick wall.
LATEST REVIEWS