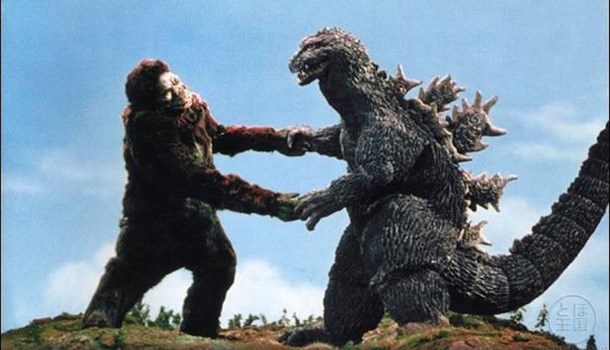 Selecting King Kong vs Godzilla (1963) on the blu-ray menu immediately raised concerns. There it was in words even I could understand: this was the US theatrical release version. US theatrical release version, why? Not liking the sound of this, I opened the bookset and flipped to the film’s page. Condensed: this US version, using footage from director Ishiro Honda’s original and supplemented with new footage “supplanted” the original. What supplanted in this context meant, to me at least, seemed not in the least bit clear. Was Honda’s original film destroyed, and if not why was this version not included? A quick bit of research (OK, Wikipedia skimming) shows the original exists in various forms of quality, mostly due to the poor preservation of the original negatives. But it exists and in restored versions.

None of this boded well.

Then, as I started watching, fuck me, who could not cringe at the mind-boggling dreadfulness of the opening scene? As I would find out, this version uses a framing device of a UN TV news reporter (UN? WTF? They run a world news network now) who in the opening scenes talks to another UN news reporter in Chile because reasons, whatever, via a satellite link up that the director likes to show us but looks like a children’s spinning top in space, it’s so laughable directed by Thomas Montgomery (who he?) and acted by nonentities not even worthy of being given a name that someone’s three year old could come up with better with a crayon and runny nose. And likely then the crayon would be stuck up their nose but the kid would gurgle out a more coherent introduction as the reporter in Chile says bugger all except random ramblings about an earthquake. Then apropos of nothing, our American news anchor, replete with all the charisma of a dead hedgehog oozing pus, describes a Japanese professor who has found a non-addictive narcotic fruit that somehow is connected to chemotherapy, oh and is only available on one small island that believes the fruit is connected to some giant monster and… yes, by now like me you’re banging your head against the TV screen; then as the film moves into scenes shot by director, Honda, moving us to Japan and the offices of Pacific Pharmaceuticals where an executive, Tako, thinks, yeah a giant monster (just seven years after the second Godzilla attack) would make for great publicity so he decides to send some guys to look for one on Faro island.

Heart sinking through the floor I continued on, so you don’t have to. By now all hope had been left at the door of the offices of Pacific Pharmaceuticals.

So I kept going, even when it becomes clear that the initial UN news framing device isn’t some bookending device, no, no merciful release, it keeps interrupting the narrative, including introducing a reporter from Tokyo as if the story that will unravel is being shown to us live, via their news service.

So as this is meant to be live news and monumental events are unfolding you might expect these UN news reporters to suggest some urgency, for instance, when Godzilla suddenly appears; surely this is something of at least moderate interest or concern? Considering this is Godzilla, capable of untold death and destruction. No. The anodyne American UN news reader blathers in his bland way just as he might if selling you Durrance Brand tooth paste! Yes, the Durrance brand ensures your smile is a confident smile! Buy Durrance teeth cleaning products today! Available from all reputable supermarkets. 1.2% of clinical trials showed increase confidence after using Durrance branded products.

It becomes obvious very soon that the framing device is there to allow the film to insert bits of Honda’s original film so that it purportedly tells some semblance of a story, mainly because whichever UN reporter is speaking they basically tell you and now this is about to happen. Sadly often even this framing device is utterly incoherent, creating bizarre narrative non-sequiturs that leave you tired and wanting the film to just end. Suddenly Godzilla has reached Japan – and some scientist bod brought into the studio is able to say specifically Godzilla will travel to Japan because [insert unconvincing reasons instantly forgettable]. Narratively Godzilla has managed to potentially travel several thousand miles in what… who knows because there is no sense of narrative time. Maybe this is an intentional experimental narrative. Nah. It’s just shit storytelling.

Most of what is used of Honda’s footage is shown in the scenes of Kong on Faro island and the monster battles to come. For a short time the film progresses with a merciful lack of inserts from the UN news studios. Instead we follow the two guys (names irrelevant) who are sent by Tako to Faro island to find the monster and the film riffs from the original King Kong. It’s clear that Honda is taking an intentionally comic approach to our interlopers as they are met by unwelcoming natives, though via their interpreter and the giving out of a radio and cigarettes (including to a young kid – don’t tell your mother) they get to stay and so witness various ceremonial activities of ‘the natives’. The whole thing feels lifted from King Kong. Even our two interlopers are dressed like mockeries of the original characters. One of them carries a camera as if a cut-price version of producer Carl Denham, the character who takes the film crew to the island in King Kong. (Actually he is from a TV station.) The write up in the bookset makes it clear that the humour was definitely Honda’s intention but the scenes with the monsters should be serious. The seriousness of the monster sadly though never fully materialises and the humour is made almost unbearable by the bloody dreadful dub.

It seems Merian C Cooper, director of King Kong (and producer of many of John Ford’s films) was disgusted by the creature they’d created being “belittled” and if Cooper had watched one moment of the US theatrical release he’d have a point, it’s an excrescence. Some of it though is hilarious if not intentionally so. The scientist brought into the UN newsroom to explain Godzilla would have fitted perfectly into Airplane! The deadpan seriousness of it all when the scientist is using a picture book of dinosaurs designed for four years olds leaves you wondering who wrote and directed this utter tat? One of the writers clocks up a questionable list of credits including The Jetsons. Actually your average episode of The Jetson’s is better than the writing on display. The director, Thomas Montgomery, made, well almost nothing and it shows – really look him up and his most prolific work is directing four episodes of a TV series called My Mother The Car. I know I told you before the American additions were terribly made but really, I feel the need to put the boot in. It deserves the worst possible metaphorical kicking. It’s unutterable shit.

Some of Honda’s cinematic skill though does remain but it’s lost in a slipshod morass of editing non-sequiturs that leaves you half the time wondering what’s been missed out. Yet, those fragments can be worth waiting for. The image of the sleeping Kong that has drunk a tonne of soma (yes, the very original name given to the narcotic Pacific Pharmaceuticals is after) is extremely effective. Honda clearly just knows how to frame a scene, and those on Faro Island, with the island natives going through their ceremonial motions show he understands how to construct a compelling image. I say image as any pacing or sense is obliterated by the re-edited mess.

It’s also in the film’s credit that many of the special effects are better than to be expected, especially the giant Octopus fight scenes. Yes giant octopus attack! Who doesn’t love a giant octopus fight scene? Though even this is ruined by the fact that it takes place in amongst one of the narrative non-sequiturs where your brain is focussing more on why is this happening? Who is this person looking for her son? What did I miss? Unfortunately because Honda did not get his way with how he wanted the monster fights to look, like Godzilla Raids Again many of the special effects lack the visual impact of the original. This is such a shame because as Godzilla showed Honda really knows how to use the camera and the special effects together to both build a story and provide a visceral punch. Sadly in general all the special effect work is made utterly pointless because of the incomprehensibility of the resultant film.

It becomes a film you just want to end. Fair enough for a foreign market dub a film if you want to (I don’t want them to, but that’s just me…) but don’t hack it apart and add pointless shit to it that makes it an comprehensible mess. And that is what for the most part this film is. Yes, it makes sense to the extent that there are two creatures and they will fight but otherwise the journey is just an incompetent splicing of materials of varying qualities that leaves you feeling like finding those responsible and demanding an apology.

Would I like to see Honda’s original? Yes, regardless of the quality and you have to question why Criterion included only this version as you struggle to imagine who thinks it is anything other than a total fucking mess. And John Beck who produced it, deserves to live in infamy – even if curiously he did manage to produce a few decent films.

And from the UN news HQ... some nonsense best forgotten.

Footnote  - with thanks to one of our readers, who has pointed out that the Japanese version is included in the bonus material. As may be obvious to those who own the set I've been taking it a disc and a film and a review at a time - and the bonus material is tantalisingly on the 8th and final disc in the set. Sad but true, I'm only mid-way through the sixth disc as I write this (and sorry it also means there are more of these to come). I would have thought the film page in the book would have noted the original version was on the final bonus features disc but no... maybe that's why I don't programme the content of Blu-ray releases instead do the day job? But it's presence means keep heart those who also want the original. I'm intrigued to see how good it is, though let's face it, can it be worse than this? Wow, that would take one stinker of a film and I really, really don't think it likely.

2
Just give me Honda’s original, not this butchered, utterly joyless version. Nothing could be worse!
LATEST REVIEWS