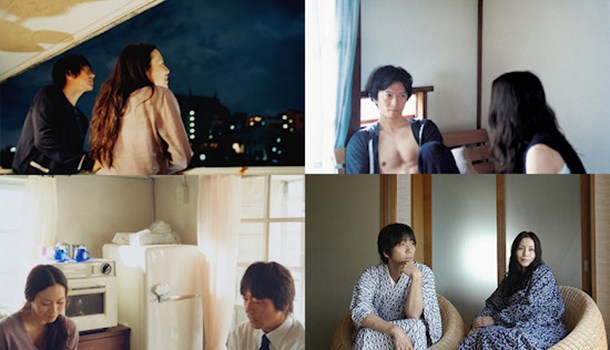 Ruriko (Miki Nakitani) and Satoshi (Nao Omori) have been married for about three years. Ruriko likes to get up early and get things done around the house whilst listening to the BBC World Service. Satoshi, on the other hand, prefers to sleep in and is only woken by his wife knocking on the window from outside before she mouthes ‘good morning’ through it. He reads the paper over the breakfast his wife has prepared for him, barely saying a word other than questioning her choice of egg for the day. Eventually he leaves for his job in an IT department while Ruriko works in a home studio designing teddy bears for exhibition rather than direct sale.

After work, the couple have dinner together but again they barely speak. Satoshi’s sister visits and is shocked as Ruriko calls her brother’s mobile phone to let him know she’s arrived despite the fact he’s been in the room across the hall the entire time. Each evening Satoshi locks himself in a sort of ‘man cave’ to listen to music and play video games, reachable only via telephone. Although Satoshi and Ruriko appear a happy couple, it’s clear that they are leading more or less separate lives and live more like flatmates than husband and wife.

This situation might have carried on as it was indefinitely - however both members of the couple find themselves pursued by another and almost unwillingly, both end up having simultaneous affairs. In Satoshi’s case, he seems the sort of man that things just happen to, it doesn’t seem as if he really thinks about things or makes any decisions for himself. So, when he’s chatted up by another member of the diving club he belonged to in college at a reunion party he barely notices the woman’s extremely unsubtle flirtations. He tells her that his wife has a ‘loose grip on reality’ before leaving the party early and does not quite understand her intentions when she asks if it would be alright to see him again. The woman from the party, Shio (Chizuru Ikewaki), then starts showing up at his office with lunch on her days off and eventually bamboozles Satoshi into an affair.

Meanwhile, it’s quite obvious that Ruriko is very lonely in her marriage. Several times she makes reference to a romantic idea of a double suicide, even keeping sprouted potatoes in the mistaken belief they could be used as a poison. Her husband doesn’t seem interested in her work - he never comes to her openings and in fact he just doesn’t seem very interested in her at all. When she asks him to hold her, Satoshi pulls a confused and horrified face like a small boy who’s just been asked to give grandma a kiss. He makes a sort of strange air pocket around her which doesn’t seem to involve actually touching her at all and stays like that until she wants to get out. The couple share a double bed, but seem to have very definite spaces within it and each have separate blankets.

A man turns up just after the closing of her last showing as everything is being packed away and more or less demands one of the teddy bears as his girlfriend has apparently fallen in love with it and he absolutely has to get it for her. Although she doesn’t normally sell the bears Ruriko agrees to give this one away. A couple of ‘chance’ meetings later and Haruo (Juichi Kobayashi) has succeeded in seducing the lonely Ruriko, in turn cheating on his girlfriend Miyako (Sakura Ando).

Both are engaging in affairs blissfully unaware of the other’s infidelity. As they’ve become so distant from each other there isn’t even a necessity toward lies or deception, they aren’t even really together enough for anything to seem amiss.

It’s very difficult to understand the circumstances that led to Ruriko and Satoshi’s marriage in the first place. They don’t seem to have any common interests and their personalities don’t seem to complement each other at all. Nevertheless, divorce doesn’t seem a possibility. The continuance of their marriage is an inevitability to be broken only by death. Satoshi tries to put things back to together a bit by taking Ruriko to a posh restaurant to celebrate their anniversary, the same restaurant he’d been to with Shio. However things don’t go as he’d wished as Ruriko seems to be finding the evening a lot of fuss over nothing, after all there’ll be another anniversary next year and the year after that so she doesn’t really see that it’s anything special. For her there is no other possibility, the idea of the marriage dissolving does not seem to occur to her. Disappointed, Satoshi finishes the meal in silence.

However, in some ways their respective affairs seem to actually strengthen the marriage - they begin communicating more and spending more time together. The affairs force each to consider their marriage, what’s missing from it and what’s missing in the affairs. Ruriko wonders if there’s a lack of romance in the marriage and if there is whether that’s because what they have has already transcended romance and become something else, or whether something is missing. The idea that a marriage needs a red rose and white rose, passion and truth, to be successful is repeated often and frequently questioned. They obviously don’t have truth but at the moment it’s the very lack of it that’s allowing them to reconnect. Could these sweet, little lies be helping expose the truth of their marriage, of their love?

Sweet Little Lies is a painful examination of a disintegrating marriage; there’s a sense at the end that maybe things can be put right again, the couple can reconcile and escape the isolation that’s invaded their relationship but the outcome is far from certain. Perhaps Satoshi and Ruriko can regain the happiness they felt in the beginning or perhaps that’s the sweet little lie they tell themselves and they’ll keep going on together each as lonely as the other. The result is a beautifully shot, thought provoking film that will linger in your mind long after the credits roll.