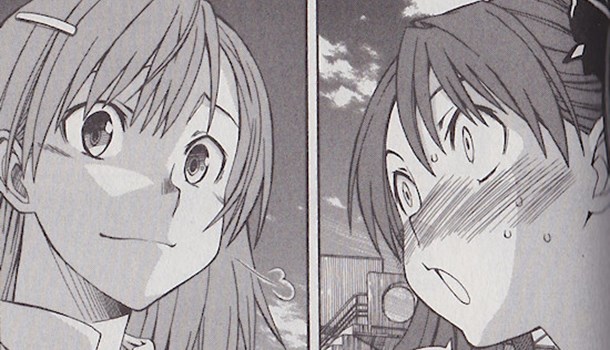 The creator of the "Level Upper" programme - which allows ability users within Academy City to illegally boost said ability markedly, albeit at great risk - has been cornered... but how to stop her escape?  Such is the dilemma which opens this third volume of A Certain Scientific Railgun.

With an entire network of abilities behind her, even getting close to the suspect Harumi Kiyama is a big ask for Mikoto Misaka as she attempts to deal with this foe single-handedly, but when she does finally spy her opportunity she gets an even bigger shock - a flashback to the past and the origins of Kiyama's current situation, before the network of subconscious individuals she controls takes on an even more dangerous form which threatens to rampage out of control towards a nearby power plant.

Ultimately of course, our heroine prevails here with a little help from her friends, although Kiyama's story seems to be far from over as inextricable links between herself and Misaka are laid in place.  For now though, the remainder of this volume brings us a happy ending to this particular story arc before taking a journey back in time to Kuroko Shirai's formative year as a member of Judgement, as she learns some important lessons while also making friends with Kazari Uiharu as she too embarks down the road of joining Judgement.

It would be asking a lot for this latest instalment of A Certain Scientific Railgun to live up to the high expectations set by the last, so it's no real surprise that it doesn't quite manage it - splitting the climax of the "Level Upper" story arc across two volumes undoubtedly helps to sell more books, but it takes a bit of the impact out of proceedings as the final events of the story finish up in relatively short order within this third volume.  After this emotionally charged tale, things take on a lighter tone for the most part, allowing some time to enjoy Mikoto and Kuroko's relationship for a while before being granted a solid and well-planned flashback courtesy of the latter character that is nonetheless more of a side-show than any kind of main event.

Even though it won't catch your breath or provide too much gut-wrenching emotion, this is still another entertaining volume from this series, with artwork that remains consistent and great-looking throughout and both stories and characters that hit the spot more often than not.  Seven Seas Entertainment's presentation again remains solid, with a decent translation to keep the volume zipping along.

If you've enjoyed A Certain Scientific Railgun thus far, it certainly shows no signs of running out of steam here as it continues to make full use of the most entertaining and fascinating aspects of its world, meaning that it remains very much on our "worth reading" list.

7
The quality of its first major story arc means it's a disappointment to see it end, but there's still fun to be had with the side-stories that make up the remainder of this volume.