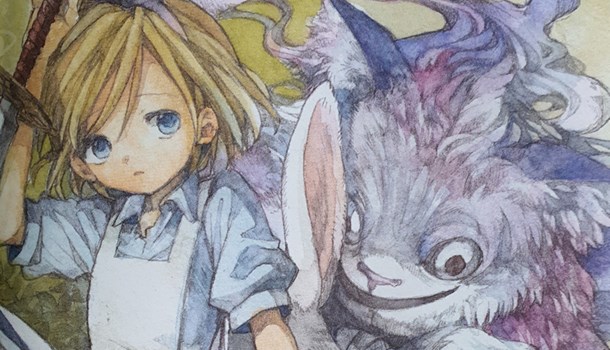 Kuninaka Aoba is whisked off to her beloved fantasy realm of Alice in Wonderland after a mysterious contact appears offering to grant her a wish in return for playing Alice. Relentlessly bullied, the timid girl wishes for her classmates to like her, and after experiencing this drastic turnaround, vanishes down the rabbit hole to a familiar and yet desolate world.

In this fairy tale, the characters are mindless zombies, other main characters are carrying shotguns and the only way to survive is kill or be killed. Can quiet little Aoba make it through this gruesome new reality, or will she be another fatality in this not-so-whimsical bloodbath?

While technically an Isekai adventure, it has the unique twist of allowing Aoba to return home, making her adventures between reality and fantasy all the more unusual. Coupled with the fact that she can interact with other players outside of the fairy tales, things are set up nicely for some dramatic plot twists. I was pleased to see a major character hailing from the UK, so naturally I'm now feeling a little more invested in that particular plot-line, and I hope they bring together not only an interesting international cast, but also many differing approaches to dealing with the dark world they find themselves in.

However, given the title and the grim artwork, I was a bit surprised at how mild the book actually is. I'm sure down the line there will be difficult choices and sacrifices along the way, but much of the setup is still a mystery at the end of the first volume. There's only just enough intrigue to convince a casual reader to pay for another instalment, and the book teases other protagonists for our lead to get involved with, but at the moment it's only just scratched the surface of the potential goldmine a story like this could generate.

The artwork is pretty fantastic - lots of tone, beautiful layout work and some great full-page showstoppers that really sell the impact the story is trying to relay. Tone switches between nightmarish visions and everyday school events very well, and it's clear that artist has a fantastic grasp of the characters - every character has a unique look and the variety of the cast makes this especially notable.

While perhaps not as impactful as I was expecting from the cover (Aoba as Alice dual-wielding swords in front of dispatched foes) I found the whole experience enjoyable. If you're a fan of fairy tale worlds, then the attention to detail within this book should impress, peppered as it is with Easter Eggs and even little factoids regarding things like historically accurate notes and foodstuffs.

If you're looking for a hook for your next magical-girl series, then you could do far worse than Fairy Tale Battle Royale. I for one look forward to seeing where the author takes us.

7
Beautifully rendered with likeable characters, this book doesn't rush its story - subsequently there's much to look forward to, even if we don't yet know quite how Grimm this fairy tale will become!