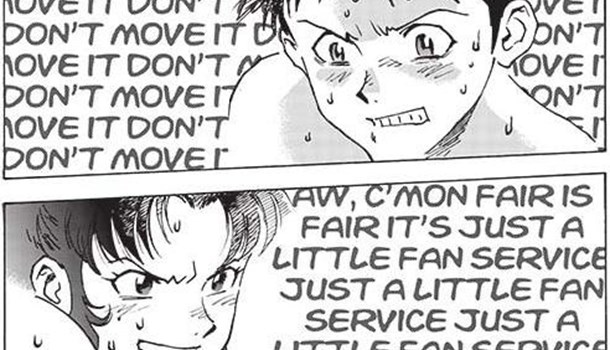 Whilst doujinshi (fan-made manga based on licensed properties) are big business in Japan, over here in the west it tends to be the case that it’s on the more erotic side of things that such works get noticed, and even then they’re generally not officially released. So when a big company like Dark Horse licence a semi-official collection of doujinshi produced by Young Ace Magazine in Japan, it’s certainly enough to turn your head. When you realise that it’s a tribute to the goliath that is Evangelion and that it’s written by published manga-ka then it’s an even bigger deal.

It’s impossible to do a standard kind of review on this type of release, as there’s no real story or structure to it and none of the sixteen or so doujins are long enough to give much of a synopsis of.  The same characters are used throughout of course, but they’re a different exaggerated version of themselves in each tale, relying on the reader’s knowledge of the characters to make the gags work rather than waste time setting anything up. If you’ve never seen Evangelion – particularly the series rather than the newer films – then this collection probably isn’t for you.

What I can say for those who are familiar with the series is that this is a brilliant collection. Every work bar one is played as a spoof, lovingly playing with the existing structure of the series and its characters to hilarious effect. If you’ve ever wanted to see Evangelion re-enacted by dogs, or to know just why Gendo always covers his face with his hands then this volume will reward you with that and more! Almost every gag plays brilliantly, though a few of them are given a small note here and there in case your Japanese isn’t amazing when some words are untranslated to preserve the gag (although I must admit I nearly fell over laughing at Shinji wanting to be the ‘Oppailot’ of Unit 1!), and the only dud of the bunch is from Yun Kouga, who seems to have been the only person to try and take his writing assignment seriously.

The artwork naturally crosses a wide spectrum of styles, covering everything from almost line-perfect copies of Yoshiyuki Sadamoto’s original character designs to simpler 4-panel works and through to that aforementioned dog spoof, but the one thing it is is uniformly good. Then again, when you look at the list of talent behind the work this isn’t surprising given that each is a published manga-ka. Whilst most of their works aren’t huge deals in the west (if they’ve even been released here at all) this is certainly nothing against them and the likes of Mine Yoshizaki (Sgt Frog), Hayto Aoki (Macross Frontier) and Rikudo Koshi (Excel Saga) have big enough works to their names that anyone choosing the title solely on the creator will have an idea of the talent on show.

If I could wish for anything it would be that there were a few more doujins included here, along with some more of the one-off art pieces (perhaps with a little message from the artists discussing inspirations) but those are minor quibbles when you look at this for what it is – it’s a glorious one-off tribute to Evangelion, the likes of which we may never see again in the west for any other franchise. Whilst many spin-off and semi-tribute works like Campus Apocalypse and The Shinji Ikari Raising Project have come over here to cash in, this is the first release that you can really call a love letter to the original. It’s a 160 page valentine. With panties and boob jokes.