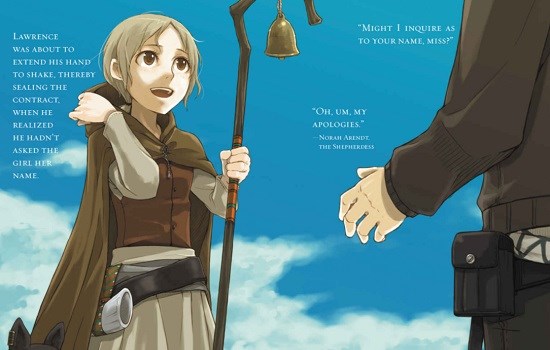 Take a look across UK Anime's hallowed pages, and you'll be hard-pressed to find a bad word said against the Spice and Wolf franchise - we've yearned for the anime to be licensed in the UK, we've gushed over the visual beauty and strong characters of the manga, and of course we thoroughly enjoyed the first volume of the light novel series which started it all.  After introducing us to travelling merchant Kraft Lawrence and his wolf deity of a travelling companion Horo last time around, this second volume in Isuna Hasekura's series of light novels carries on almost directly from where the first left off via Yen Press' English translation, which remains as descriptive and solid as ever.

We're now just a couple of weeks down the line from the drama suffered by our duo in Pazzio, and everything is looking rosy in the proverbial garden of Horo and Lawrence as they playfully chat and verbally spar with one another on their journey, before Horo's keen senses once again aid Lawrence in closing a business deal for some armour which would otherwise have gone badly awry, leaving him coming out with what appears to be a significant profit on the way.  Of course, there's no such thing as a certainty in the convoluted, murky and ever-shifting world of the travelling merchant, and by the time Lawrence reaches his next destination he finds himself staring in the face of ruin and burdened with problems that even his travelling companion looks hard-pressed to solve.  Is his new-found friendship with a young shepherdess named Norah the unlikely saviour of Lawrence's life and business?

If you read and found yourself engrossed in the first Spice and Wolf novel, then this second outing is such a direct continuation of the story and tone of the first that you could practically glue the two books together and not notice the break between them.  This is great news for fans of that earlier work, as Horo and Lawrence's expertly penned characterisation and the sparkling dialogue and behaviour between them continues throughout this volume - indeed, if anything it's accentuated and comes to the fore even more as circumstances and danger swirl around the pairing and their dealings with others.  While Horo remains the star of the show with her wit and ability to manipulate any conversation, Lawrence's growing experience with his companion makes him far more of a conversational force in his own right, while his ability and hunger when it comes to the economics of the story's medieval world shines though - this truly is a class double act of the written word, and one suspects that even a book featuring these two characters in a completely empty room could still light up several hundred pages.  Although new addition to this particular story Norah can't possibly hope to compete with these two individuals, she still proves to be a fascinating character in her own right, transcending the cliches of a cute female shepherd with aplomb while adding an extra dimension to the wider story.

Of course, the natural question about this second novel which springs to mind is how it compares to the first - beyond the obvious consistency in the tone and writing style between the two books, the first novel arguably did a better job of ramping up the drama and tension when required than this later effort, but at the same time this book manages to avoid getting overly bogged down in its economics while also allowing the main players in the story more breathing room to leap from the page.  This makes for an even sum in overall terms of quality - if you liked the first book you'll like the second just as much, and to be honest you'd be hard-pressed to get anything out of this novel without reading the preceding instalment.

If you're an existing fan of Spice and Wolf then, this is a must-buy that exhibits everything is good about the franchise (namely the dynamics between Horo and Lawrence) without getting too burdened in the minutiae of its medieval economy.  Yen Press have even avoided the artistic pitfalls of the first volume this time around, providing both the original cover artwork together with an additional sleeve in keeping with the style of the company's first volume cover.  As with the first light novel, Spice and Wolf won't be of interest or enjoyment to everyone, but it's hugely rewarding for those who have fallen in love with its characters and setting.

7
Its pace and style still won't suit everybody, but for those who enjoyed the first novel this is an adept continuation of the Spice and Wolf story.