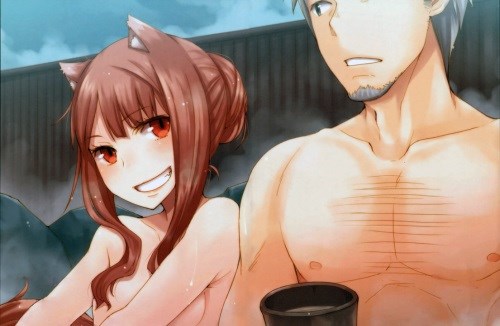 By now most anime fans probably know of Spice and Wolf, whether they encountered it through its anime, manga or light novel adaptations (and if you don’t know about it you should really go and check it out!). The series has been consistently good no matter what format you choose to follow the story of the humble merchant Kraft Lawrence’s encounter with Holo, the Wisewolf of Yoitsu. Like all things however, like all great things, there must eventually come an end. The end comes here with Yen Press’s release of the 17th and final volume of the original light novel series. Time to see then if Isuna Hasekura can send his lead characters out with the finale they deserve.

For those who are invested in these characters there was only ever going to be one ending that would prove in any way satisfactory and thankfully Hasekura doesn’t disappoint in Conclusion the second of the five short stories on offer here (and frankly the one that you’ll buy this volume to read) which takes place several years after the events of volume 16. It’s difficult to say too much about a short story without spoiling pretty much everything so suffice it to say that it’s fun and emotional in all the right ways though you shouldn’t go in with any expectation of the big dramatic sequences that have tent-poled many of the other volumes.

The other four stories are more of a mixed bag. The first, Intermission, is bizarrely told from the perspective of Enek the sheepdog who goes on a coach trip with shepherdess-turned-priest Nora and listens in on her reminiscing about her adventures with rouge merchant Eve. Unfortunately whilst the plot is interesting as far as it goes, Hasekura doesn’t quite manage to sell Enek as a POV character and seems frankly uncomfortable writing it. It’s all a bit stiff and awkward and at times weird (the story implies that Nora is gay, then that she’s in love with Enek, then that the two are possibly lovers and ultimately can’t quite seem to establish exactly where her character sits and how to present matters).

The third story, Travelling Merchant and Grey Knight is a really strong one though, framed as Lawrence at some unspecified point on his travels spending a night in an old abandoned fort with Holo and telling her the story of how he encountered the old knight who lived there before he met the Wisewolf. Despite Holo’s absence for much of the story this feels like classic Spice and Wolf material here and you could have slotted this comfortably into the series anywhere you liked and it wouldn’t have felt out of place. The plot is in turns funny and touching (there’s even a Red Dwarf homage!) and it’s just an all around great story to read, doing everything you want of it exactly right and then ending before it outstays its welcome.

The fourth story is the weakest of the volume. Gray Smiling Face and Wolf is told from the perspective of Col as he visits a town in the company of Lawrence and Holo. To be honest Col has never been a particularly good character (certainly I’ve never met a fan of the series who wanted him to do anything other than go away so Lawrence and Holo could get back to bantering) and like the Enek story before, Hasekura just doesn’t really know how to pitch the perspective in a way that doesn’t come off as forced which isn’t helped by the fact that the story isn’t really about anything so much as it focuses on what, in any other book in the franchise, would be a brief interlude during the first chapter before the main story starts. It’s all just a bit dull.

The final story switches back to Lawrence and Holo, but to be honest White Path and Wolf feels like something that was made to fill page count more than anything else as the pair visit a snowy-village and Holo gets drunk. Seriously that’s it, the story is only a few pages long but nothing really happens and it’s not all that interesting a read.

So, that’s it then. The series has ended and you know what? Despite the fact that 3/5ths of the presented stories aren’t great the remaining two are so strong that anyone who is invested in this world and these characters (and anyone who is dejectedly resigned to Takeo Takahashi never bothering to give us a third season) is really going to want to pick up this volume. To some extent Lawrence and Holo have become the best relationship going in all the anime/manga/light novels coming out of Japan, completely eschewing all the normal fan service and will-they won’t-they will-they-just-bloody-get-on-with-it-and-develop-the-plot that plagues the majority of other series in favour of a gentle, slow and delicate character-driven relationship, building towards a conclusion that feels totally earned and incredibly satisfying to the reader.

Whilst the volume itself has had to have points knocked off, if you are at all on the fence please rest assured that the franchise as a whole is worth a solid 10 and is well worth your time.

8
A supremely satisfying conclusion marred only by some sub-standard side stories.