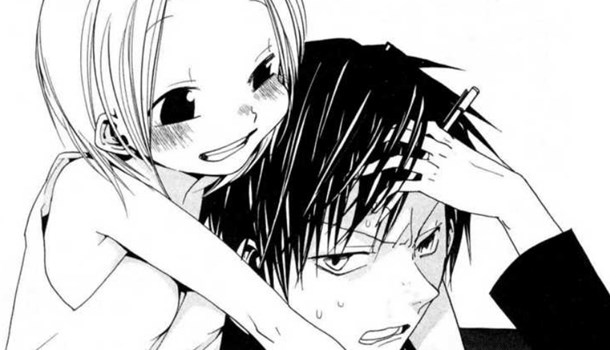 Momoko is the only child of the Kuzuryuu clan, a family with fearsome martial arts powers and inhuman strength. Even so, her father believes that a woman will never have enough strength to lead, so he encourages her to seek out and marry her betrothed, the only son of the mighty Inuzuka clan, so that she might produce a suitable heir.

Unfortunately Koushi is neither strong nor tough...

I picked this book up on a whim at Minami. I'd scanned the energetic artwork and found myself laughing at one particular fight where a bear attempts to claw off our heroine's face, only to have his claws fall off. That pretty much sets the tone for this massively OTT comedy.

As with all the best comedies, Sumomomo's driving force is the insane antics of one lead character and the sheer disbelief of another. Koushi and Momoko make a fearsomely funny partnership, and across 3 volumes I've not been bored once. It's engrossing stuff.

With Momomoko's inhuman feats of strength showing up everyone from love rivals to the school gym teacher, it's not long before more, equally strong, equally insane characters show up for a throw down. It's not unlike Ranma 1/2 with it's constant brawling, bizarre characters and twisted logic.

The artwork is simple but stunningly effective. Muscular male characters are fantastically expressive, with some of the best comedy being drawn from their facial expressions alone. The artwork perfectly captures the diminutive Momoko as she squares off against numerous man-mountain types (until cuter, more size appropriate enemies show up at least).

The dialogue is also very well crafted, especially the disparity between Koushi's world-weary outlook and Momoko's earnest and enthusiastic character. Her attempts to bed her future hubby, which always end in disappointment, are also laugh out loud hilarious, as she shyly states her intentions only to be thrown out on her butt by an exasperated Koushi.

If there's one drawback, it's that Momoko looks entirely too young in some of the sexier scenes, which just makes it look wrong, in the worst possible way. It's certainly not a book you want to read on the train. Not that there's any actual sex, but the suggestive nature for such a young girl could easily be taken the wrong way by the PC crowd (though to be honest the inappropriate nature is quite funny in itself).

This has to stand as one of the best books I've read in quite some time, and if you get the chance to track it down, do so. It's a properly bonkers, brawling, breezy comedy and it really deserves a chance to fight for a spot on your shelf.

9
Witty in subtle and not-so-subtle ways, this is mad as a box of frogs, and twice the fun.