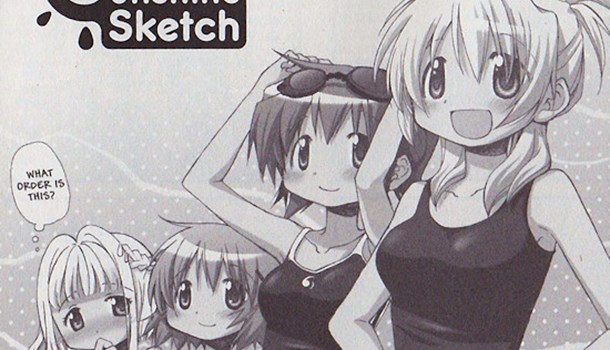 There probably isn't really anything much new to say about the sweet and gentle slice-of-life comedy manga that is Sunshine Sketch (aka Hidamari Sketch) as we reach its sixth volume - perhaps we should simple mention that it's the brainchild of Ume Aoki, as she gains wide recognition within anime fandom as the character designer for the hugely successful Puella Magi Madoka Magica?  Although this series couldn't be further from the dark visions of that show, if it attracts more fans to her work then I'm all for it.

That little snippet of information aside, all you really need to know about this volume is that it continues the every-day lives of six students at Yamabuki Art High School - seniors Sae and Hiro, second year students Yuno and Miyako, and relative newcomers Nori and Nazuna - as they reside at the apartment complex literally across the road from said institution.  Their daily lives are related, four-panel manga style, for our amusement, with much of this volume taking in the girl's summer holiday, affording them time to visit the swimming pool, museums and the like, while also having to concern themselves with homework and the like into the bargain.

As per every other aspect of the series to date, this sixth volume is a light-hearted, idealised look at school life spent in the company of good friends and with enough snacks to feed a small country, and without any concerns about money, boyfriends or parental drama.  Here is a world where nothing ever changes... or does it?  The one disturbance to our relaxed enjoyment of life comes from Hiro, as she has to face up to the facts that her high school life is fast coming to an end, with all that entails for both her future and the horrific possibility of saying goodbye to her close friends.  Although even this revelation is wrapped in the cotton wool of humour in places, it's a surprisingly touching twist for the series that will reverberate with any long-standing fans of the series - much like Hiro, we don't ever want the precious high school days of these girls to come to a halt either!  We may however, begin to have to face up to just such a possibility...

Putting aside this rare moment of sadness, anyone who has enjoyed previous volumes of Sunshine Sketch will lap this latest volume up - it admittedly starts a little slowly, almost as though it's struggling to get back into the swing of things, but as the volume progresses and the strips come thick and fast it quick improves and racks up a better joke-to-dud ratio to the point where reading it in public isn't advised lest you look like an idiot for laughing out loud at small but cleverly assembled jokes, carried along well by Aoki's constantly endearing artwork.  Yen Press' English localisation continues to be accomplished, with translation notes at the back of the volume where required and every effort is made to localise gags so they make sense in English when such occasions crop up.  The quality of paper used in this sixth volume seems slightly reduced from previous instalments to me, but that could just be my rose-tinted imagination at play.

If the whole schoolgirl slice of life genre isn't your thing then this sixth volume of Sunshine Sketch isn't likely to even come close to changing your mind - it's very much more of the same for existing fans, and even newcomers who fancy giving it a go will need to have read previous volumes to get some of the recurring character-centric jokes which rely on such previous knowledge to glean full enjoyment from it.  Assuming you are an existing fan, this volume of the manga is an undoubtable must-buy; for those looking to delve into the slice of life genre for the first time, Sunshine Sketch as a whole remains one of the few examples of "doing it right" in a sometimes crowded marketplace.

8
Yet more laugh-out-loud fun and frolics from Hidamari apartments that even a tinge of sadness towards the end of the volume can't possibly hope to extinguish.