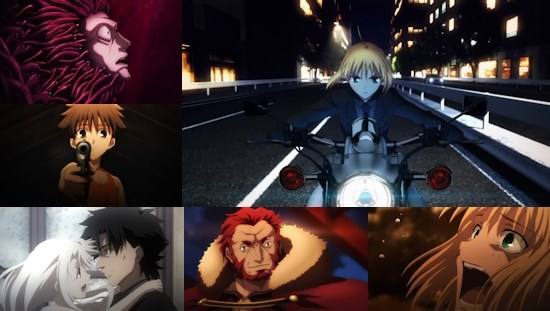 With the monstrous spells from Caster running amok and threatening the safety of the entire city, the Holy Grail War is put on hold while the other competing teams are ordered to temporarily halt their respective battles and deal with the common threat. No sooner is this problem overcome, the battle for the Grail resumes in earnest and one by one the combatants are eliminated…

The first half of Fate/Zero turned out to be an initially slow-burning yet rewarding experience, with a cast of colourful characters tangled in a mind-boggling web of loyalties, obligations and deceptions. Even amongst the supposed ‘heroes’ there were individuals who could just as easily be called villains but whether you love, hate or love to hate them, they proved to be an interesting bunch. The second half of the story continues accordingly, as we see the traditional and self-confident mage Tokiomi Tohsaka struggle to maintain control over his Servant Archer, who is trying to manipulate Kirei Kotomine for his own personal amusement. Meanwhile, Kariya Matou is facing problems of his own as the ongoing battles take a terrifying toll on his own health.

The Servants, however, still prove to be at least as entertaining as the humans they serve. Lancer’s unyielding belief in loyalty and chivalry would still be admirable even if his master, Kayneth Archibald El-Melloi, weren’t so cruel and arrogant; the mutual respect and understanding between Lancer and Saber is surprisingly heart-warming given the fact that they’re bitter rivals! My personal favourite pairing though is between the student mage Waver Velvet, still suffering from a bitter inferiority complex, and his servant Rider, the self-proclaimed King of Conquerors. Unusually, theirs plays out as a near-reversal of master and servant roles, but the way their bond grows and develops is a highlight of the show for me.

Less prone to growth and development is the Servant Saber, whose rigid beliefs are repeatedly questioned, pitied and even mocked by her rivals. The relationship with her Master, Kiritsugu Emiya, is far more uneasy and as the episodes progress it becomes increasingly clear that while their objectives may be similar, their methods are very different. Teaming such a pragmatic and world-weary Master with such an idealistic Servant casts their respective philosophies into stark contrast, giving down-to-earth ‘real world’ significance to a concept as nebulous and fantastical as ‘fighting for the use of a miraculous wish-granting device’. The body count starts to rise as the story moves into its final quarter, but it takes a break to explore Kiritsugu’s back-story just as events are reaching a crescendo.

Normally this sort of move robs a story of flow and momentum, but right from the outset it was hinted that the central conflict of this War would be between Kirei Kotomine and Kiritsugu Emiya, so I actually welcomed an exploration into what made the latter a such devoted husband and father while being the notorious ‘mage killer’. His early life is revealed with its shocks and tragedies, plus some nice little visual details dropped in for the benefit of hardcore Type Moon fans along  the way (hint: note Natalia’s character design, her choice of cigarette brand and the appearance of a familiar face from the Mage’s Association).

Because it is connected to such a large multimedia franchise, much of which has yet to be widely released internationally, this focus on one of the main characters turns out to be a wise move in allowing Fate/Zero to ‘stand alone’. Kiritsugu’s decisions affect the outcome of this story in a way that resolves itself by the end, but the central themes and ideas that it presents dovetail very neatly indeed with the story that occurs after the events of this one: namely Fate/Stay Night itself.

Of course, it’s not just about Kiritsugu: without going into spoiler territory, it’s fair to say that pretty much all of the major players have their moments in the spotlight, showing off their fighting skills, explaining their motives and quite often meeting violent and untimely ends. It’s easy to see where the fandom-derived term ‘Urobutchered’ came from in regards to the uncompromising approach of the screenplay’s writer…

The soundtrack is still consistently above average too. The heavy exposition makes for some awkward delivery of the dialogue in the English dub, but I found myself warming to it and the latter episodes in particular contained some emotionally powerful performances. Music-wise, this is one of the more understated of Yuki Kajiura’s efforts but the heightened action and drama of the series’ latter half means that there are some gloriously emotional pieces to accompany them. She’s responsible for writing the music for the opening and ending songs used in this half of the series as well: two sung by Kalafina and one by Luna Haruna.

From a visual standpoint, Fate/Zero still absolutely shines. The use of CG is a tad obvious in places, but in general it’s often easy to forget that this is a made-for-TV production: it moves with smooth fluidity and shows attention to detail that’s refreshing and immersive. Given its pedigree, this is a show that will appeal to those familiar with the ‘Nasuverse’, but outside of the notoriously fervent Type Moon fanbase its storytelling is self-contained enough and its presentation is polished enough to win over a new audience as well.

10
Although dark and demanding at points, this is a dramatic and satisfying conclusion to a solidly entertaining series. Highly recommended.
LATEST REVIEWS