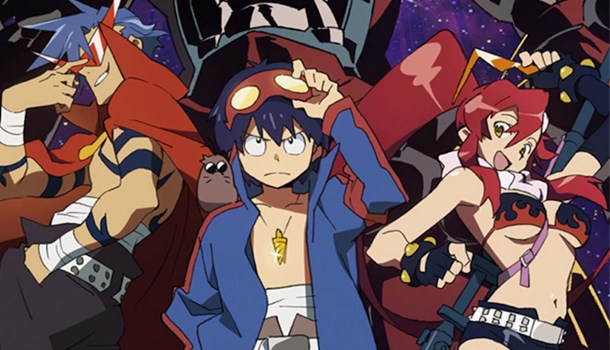 Simon (pronounced Sea-moan) and Kamina live in an underground village, where digging is the mainstay trade and the surface world is a distant memory. Both are rebels, but their lives are changed forever when a Gunmen, a face shaped mech, and the busty Yoko enter the village. Can the mysterious mech found by Simon only days before be the key to victory?

Gurren Lagann arrived with some fanfare from the hardcore quarter, but having been somewhat let down by the supposed Haruhi phenomenon, I have to confess I had my guard up.

The animation style is quite exagerrated, and the mech designs are particuarly comic, all of them looking like bizarre faces which mimic the reactions of their pilots. It's a stark contract to the stoic, expressionless masks of the Gundam and Macross mechs. Once you get used to the loud, rebellious nature of the show, it settles into a sort of mecha road trip, with the newly formed "Team Gurren" getting into weird scrapes along the way, fighting the evil Beastmen and advancing on their stronghold.

Gurren Lagann is, for the most part, a combination of well-worn elements from other mech shows. Imagine Gundam SEED crossed with FLCL and you'll pretty much have the gist of what to expect here. There are also some striking parallels with Nadesico, which itself was a parody of the genre. That's not to say that the show is less than the sum of its parts, but it isn't the revolution I'd been expecting either.

In fact it's not until episode 7 that the series actually provides a shock that really grabs your attention. In hindsight I should have seen the surprise coming a mile off, but given that I'd been told this was unlike any mech show before it, I'd discounted the possibility of a tragedy early on in the series. Had events not turned more dramatic, I'd have written this off as a 7 out out of 10 and been on my way.

As it is, the show's newfound edge makes it far more gripping, and suddenly the cast of assembled oddballs became more than a group of stereotypes and started to take on a little life.

The battle scenes, direction and characterisation are all solid, with the former being the star of this particular show. The combining mechs and bizarre aesthetic make it a treat to watch, and stands as Gurren's most striking feature.

Once again, Beez provide an excellent dub, and providing you're happy to hear the dialogue in English, you won't find it too distracting. Having subtitles to explain the kanji while watching the dub would be nice though.

In all, Gurren Lagann stands as a high quality release that, once it gets going, manages to create a distinctive identity from the multitude of other shows it delights in stealing from.

Like Haruhi, Gurren also comes in 2 distinct flavours - regular 2-Disc or Special Edition varieties. No one does special editions quite like Beez, and Gurren Lagann won't disapoint the collectors amongst you. The Special Edition comes with an iron-on Team Gurren patch, light up plastic drill and a magnetic box to store your discs in. You'll have to decide for yourselves if the extras constitute the extra £20, personally I opted for the standard edition.

8
Not the mech revolution you may have expected, but a fun, punchy series that stands out from the crowd.